Hundreds of unionized firefighters work side by side as wildfires ravage California and other Western states, but their rates of pay and benefits vary widely.

Federal and state employees are among those trying to control the 55 uncontained fires burning as of Aug. 24, according to data from the National Interagency Coordination Center. The efforts have cost taxpayers billions of dollars and resulted in 16 firefighter deaths.

The task is so immense that more than 1,000 California prison inmates were also deployed to assist the week of Aug. 20, Vicky Waters, press secretary at the California Department of Corrections and Rehabilitation, told Bloomberg Law.

Even working conditions for firefighters can be quite different. California Department of Forestry and Fire Protection firefighters sleep in a “climate controlled” motel-room situation, Scott McLean, chief of information, said. Federal Forest Service firefighters, meanwhile, “are typically sleeping in tents or even under the stars,” Forest Service public affairs specialist Jennifer Jones said. Inmates are housed in camps that have basic amenities.

California prison workers make $2 a day through the inmate firefighting program, with an additional $1 for every hour spent fighting an active fire, Waters said. Only nonviolent offenders are eligible for the program.

The majority of entry-level firefighters are assigned to crews responsible for working the fire line, which entails mitigation efforts such as digging trenches and clearing brush.

Some Get Paid Around-the-Clock

In 2017, 284,800 employees were listed as firefighters nationwide, according to Bloomberg Law data. Of those firefighters, 62.2 percent were members of a union, with mean hourly wages of $27.93.

Hourly pay aside, CAL FIRE workers take home far more than federal firefighters because they receive pay on a portal-to-portal basis. That means they are paid from the time they leave home to travel to the fire to the time they return.

Federal employees who are called away from home stations aren’t paid on a portal-to-portal basis, and they also aren’t paid for meal times. 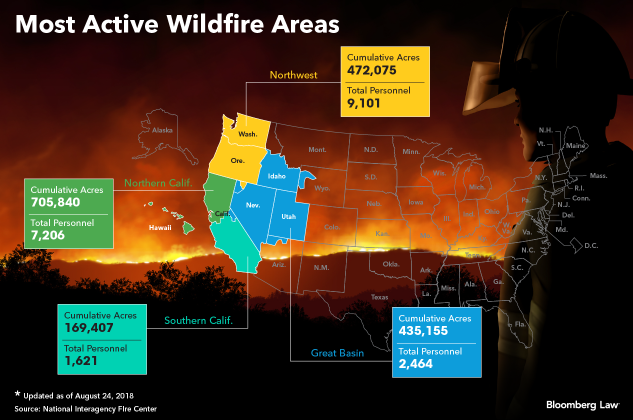 “If I’m going to be gone from my family, I want to be paid for it,” he said. “In my opinion, it’s completely not fair to those guys who don’t get it.”

Federal workers get time-and-a-half for overtime hours, and they also get “hazard pay” when fighting a fire. Hazard pay is an additional 25 percent of base wage, accrued for every hour while on the fire line. Colorado state firefighters don’t receive hazard pay.

Some federal Forest Service employees find that the risk of fighting a fire for weeks on end is outweighed by the heftier paycheck. As many as 1,200 hours of overtime are clocked annually by some firefighters, Miller said, though most fall in the 600- to 1,000-hour range.

“Sometimes our members are their own worst enemies if you will,” Allen said. “We’ve got a lot of guys who are willing to work the extra time, sometimes to their own detriment.”

The monetary incentive to push through exhaustion in high-risk situations is of concern to firefighters, union leaders said.

Changing the pay scale is “something that’s been talked about” so employees aren’t struggling for overtime hours, Miller said.

Lots of Money Up in Smoke

In one area of California alone, more than 3,500 firefighters were battling the Mendocino Complex in Northern California on Aug. 24. Additional support came from 233 soldiers deployed the same day from Joint Base Lewis-McChord in Washington.

Sixteen people have perished so far this year fighting Western fires, according to the National Wildfire Coordinating Group. Seven of the deaths occurred in July and August, six of them in California.