Mark Robbins, the last remaining member of the U.S. Merit Systems Protection Board before leaving last year, handles files on some of the backlogged case files on Feb. 6, 2019.
(Photo by Bill O'Leary/The Washington Post via Getty Images)

John Patrie says he “played by the rules” when he took leave as a letter carrier after being called to active duty by the Maine Air National Guard, following the Sept. 11, 2001, terrorist attacks.

That initial call-up turned into 14 years of service, including voluntary redeployments. Patrie kept his post office in Auburn, Maine, apprised of his whereabouts as required under the Uniformed Services Employment and Reemployment Rights Act, and he received letters and gifts of appreciation—including a debit card for uniform purchases—from the post office.

So when he finally asked to return to work effective in January 2016, Patrie said, he was “blindsided” to learn his request was denied. The Postal Service said the law didn’t apply because Patrie had abandoned his job for a military career.

Patrie challenged that determination before the U.S. Merit Systems Protection Board, which is tasked with protecting the job rights of about 2.1 million civilian federal workers. An administrative judge found that he should get his job back. “We won the case,” Patrie told Bloomberg Law.

But the Postal Service appealed to the MSPB’s three-member appellate board, and before the case could be heard, the panel essentially went out of business. It’s stayed that way throughout President entire administration. The board hasn’t had a quorum of two members since January 2017 or any members at all since February 2019.

Patrie’s case is now one of about 3,000 that are frozen without a board to hear them. Even if President-Elect moves quickly to nominate new members and the Senate confirms them in short order, it could take years for the new board to make its way through the backlog.

The board “has been nonfunctional for almost four years” beyond administrative judges issuing initial decisions, said James Eisenmann, a partner at Alden Law Group, PLLC, in Washington who was the board’s executive director from 2013 to 2018.

About half the board’s backlogged cases involve employee removals, said William Wiley, a San Francisco-based management-side attorney who was chief counsel to the MSPB chairman during the late 1990s and early 2000s. Historically, agencies have lost about 10% to 15% of removal cases, meaning they’re reversed or reduced to suspensions, he said. That would mean an estimated 150 to 225 people contesting removals will be owed back pay.

“MSPB staff continue to focus on meeting the rest of our mission—adjudicating initial appeals and issuing decisions in our regional and field offices, reviewing petitions for review and drafting decisions for a new Board, and issuing research briefs and other publications,” said William Spencer, the board’s acting executive director.

How Quorum Was Lost

The board lost its quorum when Democrat Susan Tsui Grundmann left in January 2017. Anne Wagner, also a Democrat nominated by President Barack Obama, had left in February 2015.

Grundmann’s departure made Republican Mark Robbins the board’s only member, and he was forced to leave the MSPB at the end of February 2019 because of holdover limits. None of Trump’s three nominees for the board have received a Senate floor vote. 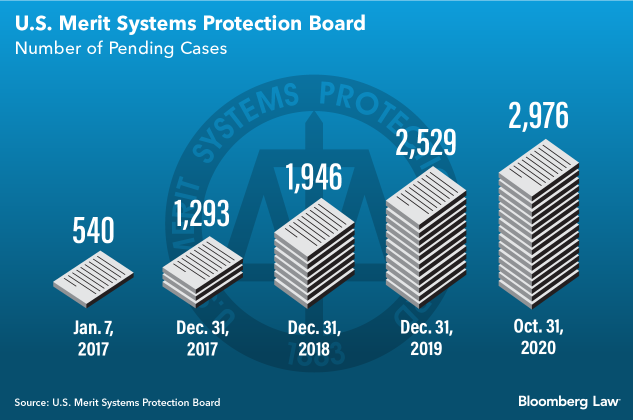 The quickest way for Biden to revive the board is to renominate two of Trump’s three picks, said Dan Meyer, a managing partner at Tully Rinckey PLLC in Washington who represents federal workers and contractors in employment disputes.

Julia Akins Clark, Trump’s nominee as the Democratic member, and Chad Bungard, his pick for one of the Republican spots, are well-regarded and—if they are nominated by Biden and confirmed—could decide cases where they agree on the outcome while the board awaits a new nominee for its second Democrat, Meyer said.

But that would mean Biden endorsing Trump’s choices to decide the fates of federal workers Trump has attacked as a “deep state” working against him.

“I don’t see the logic of an incoming president-elect carrying water for the other side of the aisle, no matter how good the candidates,” Meyer said.

Trump’s third nominee, Dennis Kirk, may be the reason why the slate of nominees hasn’t gotten a vote, said Jason Briefel, director of policy and outreach for the Senior Executives Association, a professional group that represents the interests of about 7,000 career federal executives.

Senate Democrats oppose him and “I understand that there are several Republican senators who were not comfortable” voting for Kirk, Briefel said. The office of Senate Majority Leader Mitch McConnell (R-Ky.) didn’t respond to requests for comment.

Kirk is now director of employee services at the Office of Personnel Management, which is implementing an executive order from Trump that could make it easier to hire and fire tens of thousands, or even hundreds of thousands, of federal employees in policymaking jobs. The OPM declined to comment on Kirk’s nomination.

Back pay in cases decided by a newly reconstituted MSPB likely will amount to millions of dollars, Eisenmann said, echoing earlier estimates from other attorneys.

A federal worker challenging an agency removal action who makes $100,000 per year and has been waiting for four years for their case to be heard could be owed $400,000, plus attorneys’ fees and interest, he said. The average salary for a federal worker in the Washington-Baltimore metropolitan area is about $88,000, according to a government report issued in April.

The board likely will respond to the backlog by prioritizing the most urgent cases, such as those contesting removals and other significant actions such as whistleblower retaliation, or those that affect employees’ health or retirement benefits, Eisenmann said.

Another priority will be addressing appeals of personnel actions related to a law signed by Trump in June 2017 that made it easier to discipline Department of Veterans Affairs employees, said Ibidun Roberts, an employment and labor law attorney at Roberts Labor Law and Consulting, L.L.C., in Columbia, Md.

The Federal Circuit found in March that penalties under the law can be reviewed for reasonableness in a ruling that also held that alleged misconduct from before the law was signed can’t be punished under the law.

“The VA was winning a lot of cases” because MSPB judges wouldn’t review penalties under the VA Accountability Act, Roberts said. The appeals court’s ruling means that the severity of the penalties can be challenged, she said.

The Postal Service is one of the nation’s top employers of military veterans and makes every effort to comply with USERRA, spokesman David Partenheimer said in a prepared statement.

“Because this matter is pending on appeal, we have no specific comment regarding the Patrie case,” Partenheimer said.

While he awaits the outcome of the Postal Service’s appeal, Patrie is working in a local school system. He estimates that he’s lost about $40,000 per year in annual income since January 2016, plus five years of matching retirement contributions.

Patrie has no alternative but to wait it out.

Though federal workers in some situations can take their cases to the U.S. Court of Appeals for the Federal Circuit if they’re willing to incur the expense, Patrie won before the administrative judge and can only appeal a final order from the board, said Patrick Boulay, chief of the U.S. Office of Special Counsel office’s USERRA unit, which represents him.

“This is why we are truly stuck in limbo from a legal standpoint,” Boulay said.

Louis C. LaBrecque
Reporter
MSPB backlog as of Oct. 31, 2020
Administrative judge ruling in Patrie case
Bypassing Memberless Federal Personnel Board Is Doable for Some
‘Buckets of Back Pay’ Could Go to Feds Once Appeal Board Is Back
© 2023 Bloomberg Industry Group, Inc.
All Rights Reserved