Some IRS staff are concerned that returning to work may lead them to catch coronavirus.
Photo Illustration: Jonathan Hurtarte/Bloomberg Law; Photos: Getty Images

As presses states to reopen, government workers and their unions say they’re increasingly concerned that their bosses will force them back to the office without sufficient protection.

Agencies’ approaches to returning to offices have been uneven, they say. Although the Securities and Exchange Commission’s chief told many workers to plan on staying home through at least mid-July, the Internal Revenue Service has called back 11,000 workers to begin processing paper tax returns, responding to a backlog of mail and answering taxpayer calls.

Workers at some agencies who are already back -- or who never left -- report wide variations in their employers’ attitude toward safety. For starters, there are no plans for broad testing or contact-tracing. The haphazard approach has led to confusing and often contradictory messages being sent to more than 2 million federal workers, 85% of whom live outside the greater Washington, D.C. region.

“Their lives shouldn’t be taken for granted, and that’s the way we feel right now,” said Everett Kelley, president of the American Federation of Government Employees, which represents about 700,000 government workers. “Agencies are trying to appease some in this hierarchy by saying, ‘OK we’re going to reopen,’ but the reality is it’s just not feasible.”

The government’s dilemma is one many large companies have struggled to address. Banks including Citigroup Inc. and are trying to figure out how employees can safely return, exploring policies from alternating teams that would rotate through offices on a staggered basis to seeking ways to better monitor employee health so another outbreak can be quickly thwarted. In a sign that telework is here to stay, has told some staff they can work from home permanently.

Asked to respond to criticism about the federal approach to reopening, the Office of Personnel Management issued a statement saying that “as conditions warrant across each state, Federal agencies are working to return to normal operations. Our Federal workers have shown tremendous fortitude in keeping the U.S. strong throughout this emergency.”

Many employees at key national security agencies such as the CIA, Pentagon and State Department have been hard-pressed to work from home during the pandemic simply because classified documents they need often can be reviewed only in secure facilities, not on a laptop at home. 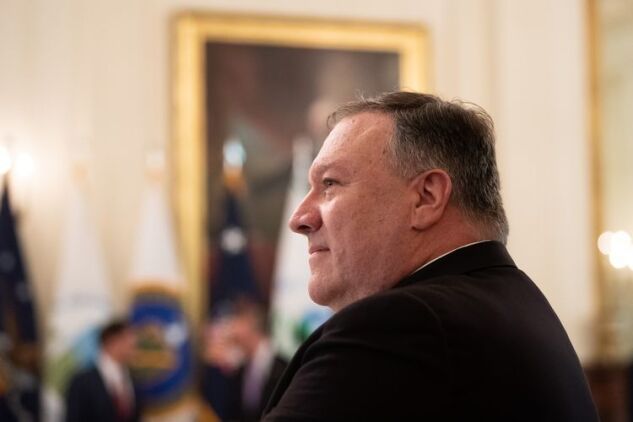 Mike Pompeo listens during a cabinet meeting in the East Room of the White House in Washington, D.C., on May 19.
Photographer: Kevin Dietsch/UPI/Bloomberg

At the State Department, the “Diplomacy Strong” back-to-work plan for when employees return en masse provides few requirements for temperature checks or social distancing, and masks are encouraged but not required.

That’s in line with Secretary ’s approach to the pandemic -- he’s rarely worn a mask in public -- and few top aides are seen in them at the State Department. As one of Trump’s closest and most fervent supporters, Pompeo seems to be following the lead of President Trump, who has said he doesn’t want the media to catch him wearing a mask.

State Department staff have been given three masks that can be washed and reused several times but haven’t been told to expect much more.

At the IRS, staff is being provided with hand sanitizer, masks and gloves, though supply levels aren’t consistent at different IRS facilities, said Chad Hooper, an IRS official and president of the Professional Managers Association, which represents the tax agency’s managers.

The IRS is also offering incentive pay of 10% to 25% to workers to return, largely to perform work that can’t be done at home, either for practical or taxpayer privacy reasons.

But the resumption of work at IRS processing centers hasn’t been uniformly smooth. Days after reopening a facility in Kansas City, Missouri, the IRS had to close it for several days after an employee tested positive for Covid-19. Nonetheless, the IRS plans to order thousands more employees to return to work June 1 in states, including Texas, Utah and Kentucky, that have relaxed lockdowns.

are more dependent on the patchwork of shifting regulations at the state level than are their counterparts at more centralized agencies. Interior Secretary said decisions over reopening at his department’s 419 historic battlefields, natural sites and heritages areas are made based on local conditions overlaid by Centers for Disease Control and Prevention guidelines.

The SEC, an independent agency, may have the most far-reaching -- and cautious -- policy so far. Chairman told employees in an email this month that mandatory telework will remain in effect until at least July 15 for the vast majority of the agency’s 4,000-plus employees. Clayton said the move was intended to provide some near-term certainty for staff.

The push and pull among government agencies echoes the battle going on across the nation, where stay-at-home orders, back-to-business moves and even the wearing of masks and other protective gear have often taken on political connotations.

Republican-led states such as Georgia and Florida initiated a gradual reopening that has now reached all 50 states, though conditions vary within each state depending on the severity of the outbreak.

Trump is betting that his political base will reward him for pressing the country to reopen quickly, even as the U.S. death count from Covid-19 approaches 100,000. Polls show that Republicans are increasingly supportive of his view that the nation’s economy can’t endure a longer shutdown. That sentiment was bolstered by comments Friday from , the nation’s top infectious disease expert, who said staying closed for too long may cause “irreparable damage.”

Yet mistrust runs deeper across much of the federal workforce after the president’s repeated attacks on government employees as a “Deep State” seeking to undermine his tenure. There’s also the memory of a government shutdown in 2019.

Interviews with union representatives, federal employees and experts show a perception that political appointees want to show up at the office as a sign of loyalty to Trump. Other workers feel under pressure to go to the office and express wariness about donning masks for fear it will displease their superiors.

“There’s a lack of leadership that would ensure employees that they’ll be taken care of,” said , a professor of public service at New York University. “There’s all this turmoil in the personnel system and that doesn’t set it up for an agile response to orders to go home and come back.”

OPM issued guidance in late April spelling out steps aimed at helping government agencies prepare to bring back employees. Although the advice was broadly written because state regulations vary, critics warned that it left key gaps.

One big demand from federal workers is for more of the data that public health officials say is crucial for reopening, according to Tony Reardon, president of the National Treasury Employees Union.

“Testing and contact tracing is something I have raised pretty darn frequently, and I think it’s important at every agency if you’re going to require people to come back to work,” said Reardon, whose union represents about 150,000 federal employees, including those from the IRS and many from Customs and Border Protection. “It did not sound promising to me in the near-term that the necessary testing is going to be available.”

Officials who feel the most anxious about the openings say the system has a natural backstop in the nation’s capital because so far the District of Columbia and its Maryland and Virginia suburbs -- where many federal employees live -- are moving cautiously on easing stay-at-home orders and it would be difficult for employers, even in the federal government, to defy them. The region is among those still struggling the most to contain the outbreak.

And as the federal government lurches toward a reopening, some of its employees may simply refuse to do so, pressing for great flexibility with telework options, just as their peers at financial and technology companies are doing.

“The feds are smart people,” Light said of the government employees. They “will make the decision with partners, spouses, friends and family about whether they want to take the risk, and I suspect a lot won’t go in.”

To contact the reporter on this story:
in Washington at nwadhams@bloomberg.net