Workplace engagement among federal employees as a whole fell in the most recent Best Places to Work in the Federal Government rankings from the Partnership for Public Service.

“The message is clear—after several years of improvement, there’s been a sharp decline” in worker engagement, Mallory Barg Bulman, vice president for research and evaluation at the partnership, told Bloomberg Law. The results from a survey of federal workers that got nearly 600,000 responses should be considered meaningful “feedback” for agency leaders, she said.

Some of the sharpest drops in employee engagement were at agencies that have made or proposed dramatic changes affecting their workforces; garnered headlines for labor disputes; or made changes to their missions.

But bright spots remained. Federal workers rated NASA the best large agency for the seventh year in a row. The Department of Health and Human Services came in second on the list of large agencies—those with 15,000 or more employees—followed by the departments of Commerce and Transportation. The Intelligence Community, a group of 17 agencies with national intelligence missions, came in at No. 5.

Engagement scores at the Department of Agriculture fell the most of any large agency, making the USDA No. 16 out of 17 large agencies in employee engagement, according to results released Dec. 12 by the partnership. The department, which was in seventh place last year, recently proposed moving some of its agencies outside the Washington area, among other changes, Bulman said. The Department of Homeland Security was again the lowest-ranked large agency, but the DHS has improved its score in recent years, she said. 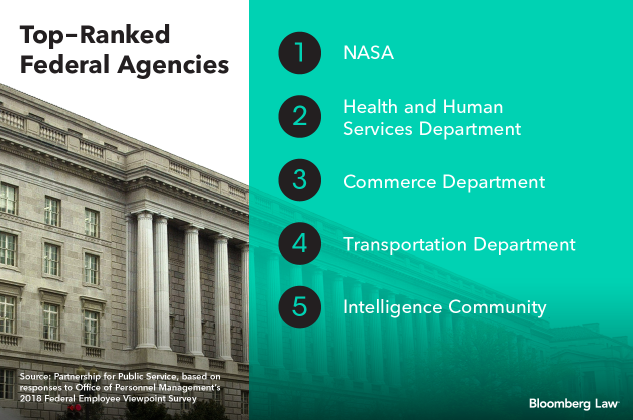 The Department of Education is the lowest-ranked of the 27 midsize agencies. The department is in a labor dispute with the American Federation of Government Employees after it unilaterally imposed a new contract on the union. The department said it did so because AFGE was dragging its feet on bargaining over a new contract.

The second lowest-ranked midsize agency is the Consumer Financial Protection Bureau, which has eased its oversight of financial institutions while contemplating a name change. Agencies that don’t maintain a strong focus on their core missions risk alienating their workforces, Bulman said.

The partnership derives engagement scores from employee responses to three questions: Would they recommend their agency as a good place to work? Are they satisfied with their jobs? Are they satisfied with their organizations? Bulman said. The partnership mostly uses data from the Office of Personnel Management’s annual Federal Employee Viewpoint Survey to compile its rankings, although additional survey data is included in the results. A total of 598,003 employees responded to the most recent OPM survey.

The USDA’s plan to move its Economic Research Service and National Institute of Food and Agriculture to new locations has “generated great enthusiasm around the country,” along with numerous offers to host the agencies, a department spokesperson told Bloomberg Law.

“The plan will improve USDA’s ability to attract and retain highly qualified staff with training and interests in agriculture, many of whom come from land-grant universities,” the spokesperson said.

The CFPB has gone through “a tumultuous year of great change,” including its first leadership transition, agency spokesman John Czwartacki told Bloomberg Law.

“Our employees are one of our most important stakeholders and their happiness is of utmost importance. The good news here is that we only have one way to go—and that’s up,” Czwartacki said.

The OPM and the Education Department didn’t immediately respond to requests for comment.

“This year’s rankings tell the tale of two governments,” partnership President said in a statement.

This year’s rankings were compiled by the partnership and global management consulting firm Boston Consulting Group.