Chief Operating Officer said the social-media company is extending its paid leave policy to workers who are the victims of sexual assault and domestic abuse, at a time when violence in homes is on the rise.

All employees globally will be able to take as many as 20 paid days off if they or a relative have been the victim of a crime. Previously, only workers in the U.S. were allowed to take unpaid leave, and only if they were the victim. 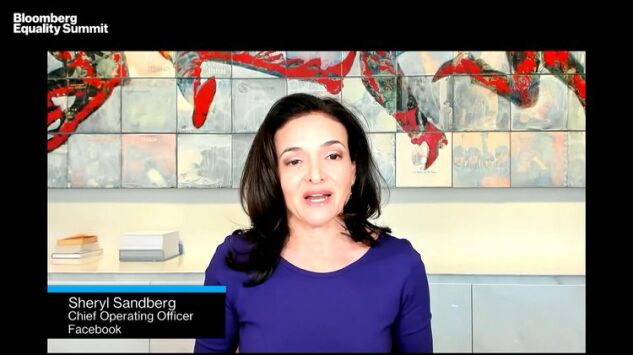 “This is us really recognizing that this is something that affects everyone, including our employees,” Sandberg said during a panel discussion Wednesday at the . “It’s a situation where you need paid time off, and not just for yourself but for a loved one.”

As local governments have issued stay-at-home orders and shut down businesses to fight the spread of Covid-19 in the past year -- putting pressure on relationships, mental health and financial stability -- cases of domestic violence have increased. A study conducted by Howard University researchers estimated that social distancing measures increased domestic violence by roughly 6%, or more than 24,000 cases, during the first few weeks of the pandemic last year.

Sandberg appeared alongside Facebook Chief Diversity Officer to discuss how the company, the world’s largest social network, is trying to diversify its workforce, take hate speech off its platform and tackle bias against underrepresented groups.

Both executives condemned the violence against Asian people that has coincided with the spread of Covid-19 in the past year. On Tuesday, a gunman killed eight people, including six who were of Asian descent, in three shootings in the Atlanta area.

“This has just been an incredible challenge to wake up to,” Williams said. “It’s scary. It’s frightening. It’s horrible and it’s unacceptable.”

Sandberg also called on governments and companies to address how women have been in the workforce during the pandemic. Female workers were more likely to report wanting to leave their jobs because of increasing demands at home, or they held onto jobs that were more at risk during the sluggish economy.

Sandberg said it was necessary for men and women to share household duties more equitably. She also called on American companies to offer more family leave benefits to their employees.

“We need better public policy and we need companies to step up,” she said.

Few companies offer employee leave benefits for reasons beyond sickness or the death of a loved one. A 2019 survey conducted by the Society for Human Resource Management found that the majority of employers offered workers paid sick leave and bereavement leave, but only 32% offered paid personal leave. Only 34% give paid maternity leave and 30% offered paid paternity leave, the survey found.

Still, Facebook may find it challenging to ensure that people feel comfortable coming forward to take advantage of the new domestic violence leave policy. Under the new policy, workers will have to tell their managers that they need to take an emergency leave but won’t have to specify the reason. The employees will later be identified as a domestic abuse or crime victims in Facebook’s internal systems that only human-resources managers have access to, according to a Facebook spokesperson.

“This is brand-new and I think this is going to be a tricky thing with this policy. So we’ll have to see how it unfolds,” Sandberg told Bloomberg News in an interview on Tuesday.

The benefit also doesn’t apply to the many that Facebook employs through outside consulting firms. Facebook has been the target of complaints over the workplace conditions of its thousands of contract content moderators, who must slog through images and videos sometimes depicting graphic violence and disturbing sexual activities, but aren’t given the same pay and benefits as the social media giant’s full-time staffers.

(Updates with comments from Sandberg, Williams starting in third paragraph.)