Then-head coach Brian Flores of the Miami Dolphins on the sidelines during the first quarter against the Tennessee Titans on Jan. 2, 2022, in Nashville.
Photo by Silas Walker/Getty Images

Flores, who is Black, filed against the league in Manhattan federal court on Tuesday, naming the Giants, Dolphins and as co-defendants. But he said all NFL teams have hired very few Black people for the top coaching and front-office jobs, even though approximately 70% of the league’s players are Black.

According to the suit, the league is failing to live up to the “Rooney Rule,” which requires teams to consider minority candidates for head coach, general manager and other positions. of the is the only Black head coach in the NFL.

The NFL said Flores’s claims are “without merit” in a statement. “The NFL and our clubs are deeply committed to ensuring equitable employment practices and continue to make progress in providing equitable opportunities throughout our organizations,” the league said. “Diversity is core to everything we do, and there are few issues on which our clubs and our internal leadership team spend more time.”

Flores, 40, claims that, even before he interviewed with the Giants, head coach inadvertently told him that the New York team would be naming as head coach. The complaint reproduces Jan. 26 text messages in which Belichick mistakenly congratulated Flores. 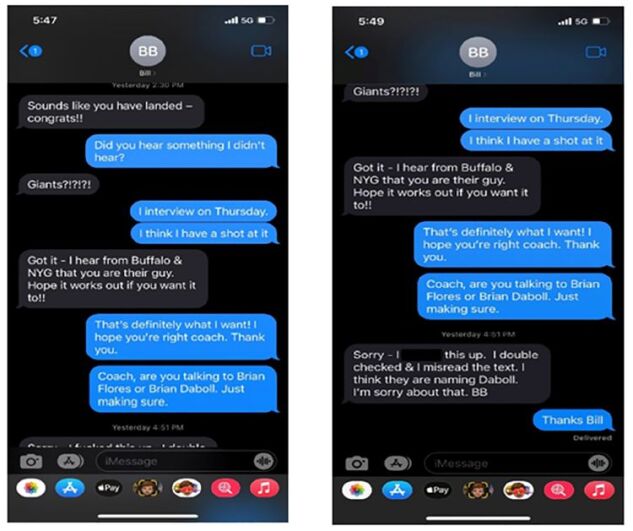 Texts from Bill Belichick, according to lawsuit
Court filing

“I hear from Buffalo & NYG that you are their guy,” Belichick texted.

Flores responded by pointing out that he hadn’t yet interviewed for the job. “Coach, are you talking to Brian Flores or Brian Daboll,” he texted. “Just making sure.”

Belichick then said he made a mistake, texting, “I double checked and misread the text. I think they are naming Daboll. I’m sorry about that. BB”

The Giants, which announced the hiring of Daboll on Jan. 29, denied Flores’s allegations in a statement.

“We interviewed an impressive and diverse group of candidates,” the team said. “The fact of the matter is, Brian Flores was in the conversation to be our head coach until the eleventh hour. Ultimately, we hired the individual we felt was most qualified to be our next head coach.”

According to Flores, his Jan. 27 Giants interview went forward “for no reason other than for the Giants to demonstrate falsely” to Commissioner that the team was complying with the Rooney rule. He said the Rooney Rule is not working “because management is not doing the interviews in good faith.”

Flores, who was fired from his Miami position on Jan. 22, also took aim at this old team in Tuesday’s suit. He claims he was fired for refusing to follow directives from the team owner that he believed were wrong, including an order to “tank” games to win a first-round pick in the following season’s draft.

According to Flores, Dolphins owner Stephen Ross offered to pay him $100,000 for each game the team lost during the 2019 season. Flores claims the team’s general manager, Chris Grier, told him that Ross was “mad” that the coach’s success in leading the team to back-to-back winning seasons compromised the Dolphins draft position.

Flores claimed Ross also pressured him “to recruit a prominent quarterback in violation of league tampering rules.” In the winter of 2020, Ross set up a lunch meeting with Flores on his yacht at a time when the quarterback was arriving at the marina, an apparent attempt to set up a meeting. Flores said he refused to meet with the quarterback and left the yacht.

“After the incident, Mr. Flores was treated with disdain and held out as someone who was noncompliant and difficult to work with,” according to the complaint. He was fired three years into a five-year contract.

In a statement Tuesday, the Dolphins said, “We vehemently deny any allegations of racial discrimination and are proud of the diversity and inclusion throughout our organization. The implication that we acted in a manner inconsistent with the integrity of the game is incorrect. We will be withholding further comment on the lawsuit at this time.”

Flores claims he experienced another “sham” Rooney-Rule interview in 2019 when he pursued the Denver Broncos’ head coaching job. He said team representatives, including Denver’s then-general manager, , and , the Broncos’ president and chief executive officer, arrived an hour late.

“They looked completely disheveled, and it was obvious that they had drinking heavily the night before,” he said. The job went to , a White man.

The Denver Broncos didn’t immediately respond to a request for comment.

Flores claims that when Black coaches are hired, they’re paid less and are fired more often than their less successful white counterparts. And they’re less likely to get a second chance after being fired by a team.

He is seeking to represent a class of Black general managers, head coaches, offensive and defensive coordinators and quarterbacks coaches, as well as Black candidates for those positions. He asked a judge in New York to award unspecified damages and order changes to remedy the leagues alleged discriminatory practices.

Jonathan LaCour, a Pasadena, California-based labor and employment attorney not involved in the case, said it’s a long shot for Flores to win class-action status. It would require his lawyers to find 25 to 40 other coaches who suffered similar discrimination under nearly identical circumstances, LaCour said.

“The court is going to say that doesn’t work as a class and that each case should proceed a separate lawsuit,” the attorney said. Still, LaCour said, the lawsuit could be meaningful if it results in a settlement and a pledge by the NFL to do more to prevent discrimination.

(Updates with labor attorney’s comments at end of story.)