Employers like , , and are turning to TikTok to recruit and hire workers, raising concerns among employment law attorneys who advise that the practice isn’t all fun and games.

TikTok, the popular video-based social media platform, debuted a pilot program this month with its own website for applying to jobs via the app, which provides resources, tips, and examples of quality personal pitches. The medium dissolves any previously-established protection against looks-based discrimination, encouraging what one attorney called “hyper superficiality,” or the idea that an applicant’s whole identity is visible via their videos. That flips the script of the usually-advised practice of employers scrubbing resumes of protected information that could be used to discriminate against an applicant.

Older workers are also potentially disadvantaged through the practice, both because they’re less likely to use the app and because hiding one’s age is antithetical to the medium of video.

Studies have shown that lower-paid workers in industries such as hospitality are less likely to return to previously held jobs, and—as employers scramble to fill those job openings—use of the app in hiring has spiked. For some, the trend is concerning.

“One of the best practices in HR is to anonymize resumes,” said Jahan Sagafi, partner-in-charge of Outten & Golden LLP’s San Francisco office. “That’s a very different experience when you’re watching a video on TikTok.”

TikTok’s platform is entirely visual, eliminating the wall between an employer and an applicant that regulations and laws have worked so hard to build, according to Adam Forman, a member of Epstein Becker & Green P.C. He advises employers on workplace matters, focusing on emerging issues involving technology.

“Employers will now have notice of protected characteristics that they wouldn’t have had,” he said. To avoid unwittingly stepping into a discrimination lawsuit, employers should have a third party within the organization to provide “a sanitized version” of an applicant’s credentials for the key decision-maker, Forman said.

While employers will likely eventually see a candidate if they advance to an in-person interview, according to William Alvarado Rivera, the senior vice president of litigation for the AARP Foundation, older workers in particular may be screened out before that stage, missing out on “their fair shake.” The Age Discrimination in Employment Act prohibits workplace bias against workers aged 40 or older.

“What you lose in terms of having these kinds of video applications is that opportunity to be judged on purely the criteria that might be purely relevant to the job,” he said. “There’s a potential for screening out applicants before you get to an actual substantive interview phase.”

Even concepts as apparently nebulous as attractiveness become avenues for discrimination when the hiring medium is so visual, said Ifeoma Ajunwa, a professor of law at The University of North Carolina at Chapel Hill. While that form of discrimination isn’t technically illegal, employers can still risk lawsuits by discriminating against women for their attractiveness while not applying the same filter to men.

Employers may also run afoul of the ADEA if a “creative plaintiff’s lawyer” crafts a lawsuit against an employer who is exclusively using TikTok for recruiting purposes, said Michael Elkins, founder of the Florida-based firm MLE Law.

“Do I think that’s legitimate? No,” Elkins said. “You have people of all ages on TikTok.” But it’s a possibility.

It’s also unlikely that employers are exclusively using TikTok for recruitment, according to Sagafi, but rather adding it to an array of outreach tools. The concerns arise when employers rely on it heavily, he said. Sagafi represented workers who alleged a recruiting tool accessible only for applicants with a current university affiliation discriminated against older workers.

“How much are you relying on it?” he said. “As an employer using a tool, you have a responsibility to understand what that tool is, and isn’t.” 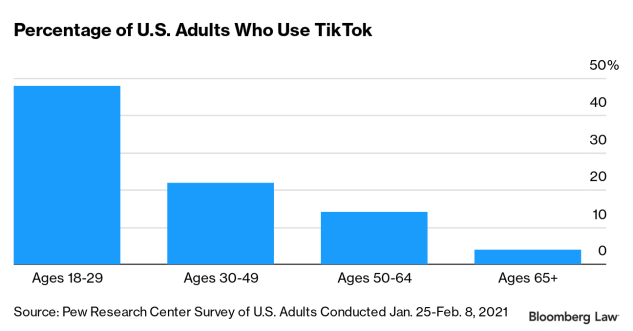 Elkins said employers have to be careful that they’re not advertising that they’re exclusively looking for employees of a certain age, and one way to proactively defend against any allegations that may arise is to gather candidates from multiple sources—not just TikTok.

“Do an aggressive LinkedIn campaign; you’re not going to get jammed up on LinkedIn,” he said.

James Paretti, a shareholder with Littler Mendelson P.C., agreed. As with any screening tool, just about all civil rights laws—from the ADEA to the Americans with Disabilities Act—could potentially come into play, he said.

“The demographics of that app and social media generally would make me advise to avoid using it exclusively,” Paretti said. “I’d guess it’s never the only thing they’re doing, though.”

Another best practice would be to store any video resumes collected from TikTok, Elkins said, lest the employer is hit with allegations of wrongdoing.

“Part of those claims is ‘what was the applicant pool?’” he said. “A lot of evidentiary issues are going to come up with this too.”

Storing those clips could lead to its own set of issues in states with biometric data laws, Ajunwa, the UNC professor, said. Illinois and California, for example, regulate what sorts of data unique to an individual can be stored by an employer, which could possibly include downloaded TikToks.

“Employers recruiting from TikTok need to be careful if they’re downloading or saving videos,” Ajunwa said.