Students speak with representatives during an engineering and technology career fair at the New York University Polytechnic School of Engineering in New York in 2015.
Photographer: Michael Nagle/Bloomberg via Getty Images

Firms that struggled to hire enough US-born workers in science, technology, engineering, and mathematics fields even before an unprecedented labor shortage have come to rely on colleges and grad programs to find skilled foreign workers. An enrollment dip from outside the country will put an even bigger squeeze on recruitment.

That makes international graduates like Yash Chopada, a data engineer from India, a hot commodity for employers. Chopada said he hoped to experience the work culture in the US firsthand. After completing a master’s degree at the University of Texas at Dallas in May, he joined the software firm through a program that allows foreign graduates to work up to three years after completing a degree.

“In the engineering space, there is no other country like the US,” he said. “There are other countries who are trying to attract more students. But the US will still be the No. 1 priority for the coming years.”

The US has long been the top destination for international students and scholars like Chopada. A steep drop in international enrollment in recent years, however, spells new challenges for the country to maintain a pipeline of foreign talent that’s likely to become even more critical to employers.

A recent Envoy survey of HR professionals found that employers expect their reliance on the US higher education system to secure foreign talent to only grow, despite thousands in fees associated with sponsoring an international worker. The shrinking talent pool means companies face tougher competition to hire those workers.

The firms most successful at finding international talent begin recruiting students as interns before they’ve even graduated college, said Chris Kline, co-founder of Mobility Empowered, which helps employers with relocation of employees.

“If a client doesn’t have that kind of approach, they’re going to struggle,” he said. “When they graduate college, it’s a natural transition to go to work.” 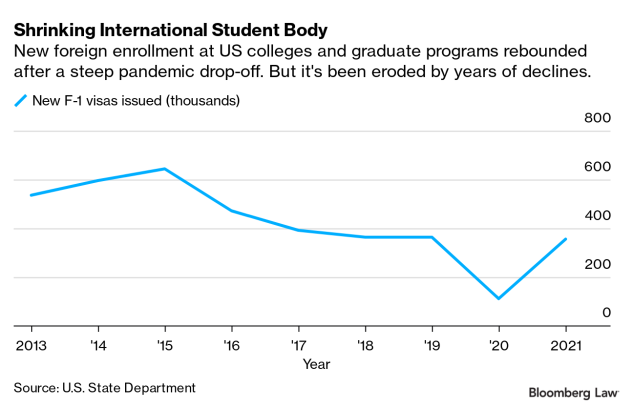 New international enrollment at US colleges was trending downward well before Covid-19, largely because of Trump administration measures like the Muslim travel ban.

“That chaos left an impression, obviously, on many students and scholars who were impacted,” said Rachel Banks, senior director for public policy and legislative strategy at NAFSA, the Association of International Educators.

Subsequent proposals to limit Optional Practical Training, which allows international graduates like Chopada to work in the US for up to three years with a STEM degree, “set off alarm bells” for international students, Banks said. But the Covid-19 pandemic posed the biggest challenges yet for colleges bringing in students from abroad.

In 2020, the number of new F-1 student visas issued cratered to just over 111,000, an almost 70% drop from the previous year. Students participating in the OPT program remain on those visas after finishing their degree. Although new F-1 visas rebounded last year to 358,000, that figure was less than half the number issued in fiscal 2015.

US colleges don’t expect to climb back to the high watermark of 2016-17 for another five years—a goal that’s complicated by new competition from countries like the UK and Australia. Canada, another competitor, now offers a pathway to permanent residency for international students.

“That’s our hope,” Bernard Burrola, vice president of international, community and economic engagement at the Association of Public and Land-Grant Universities said of a rebound to pre-pandemic enrollment numbers. “But we are also aware that the basic dynamics aren’t changing.”

While the Biden administration has made public commitments to expanding international education, Burrola said peer countries have put together national strategies to attract foreign students that the US doesn’t have. Failing to rebuild that pipeline of international talent means industries like health sciences, advanced manufacturing, and engineering struggle to fill the more than 11 million STEM jobs projected by 2030, he said.

“It’s a matter of not just filling the jobs they have now but also prepping for positions they’re going to need to fill in a few years,” Burrola said.

International workers are highly sought after by US employers because the country simply doesn’t produce enough domestic workers with the skills needed, said Liya Palagashvili, a senior research fellow at the Mercatus Center at George Mason University.

Optional Practical Training functions as a substitute for a supply of highly educated domestic-born workers, Palagashvili said. The number of international students employed through the program after graduation surpassed 204,000 in 2017, and OPT workers in STEM fields climbed to 72,000 in 2019—more than three times the number just five years before. Republicans in Congress or eliminating the program, but Palagashvili said the US must offer a pathway from education to a career if it wants to compete for international talent.

Relying on colleges and grad programs for foreign-born talent also reflects the fact that those workers “are already here,” said Andy Greenfield, an immigration attorney at Fragomen, Del Rey, Bernsen & Loewy LLP. International students make up nearly half of all STEM graduate students at US schools. About 73% of all graduate-level computer and information science students in the US were foreign-born in 2019.

“Those programs are heavily populated with foreign nationals already,” he said. “It’s just going to make sense that a certain percentage of those (new hires) are going to be foreign born and require sponsorship.”

After OPT eligibility is exhausted, employers typically try to secure an H-1B specialty occupation visa for foreign workers. Workers on an H-1B visa can remain in the US over the long-term by seeking an employment-based green card, but if they don’t win a lottery for one of 85,000 visas in a given year, companies have few options to retain key talent.

Employers say they are increasingly looking at options such as placing workers overseas and then bringing them back through other immigration avenues, such as a visa for a multinational manager. But sometimes there is no good answer, Greenfield said, “and failure to secure an H-1B number means having to say goodbye to a promising candidate.”

The Department of Homeland Security could exempt OPT participants from H-1B caps, allow graduates to work in industries outside of their field of study, and remove employer sponsorship requirements, Palagashvili recommended in a policy brief.

Jeremy Neufeld, a senior immigration fellow at the Institute for Progress, said the Biden administration could also extend the duration of Optional Practical Training, giving workers additional bites at the apple to secure an H-1B visa. And it could expand the criteria for O-1 visas so more individuals can meet the “extraordindary ability” qualifications for the visas, he said.

“Unless something is done to turn the ship around, sooner or later it’s going to really start putting the squeeze on employers who rely so heavily on international talent,” he said.