At a time when automation is changing many workplaces and making workers' skill sets obsolete, labor contracts are failing to address retraining.
By Daniel Acker/Bloomberg

Businesses and unions often talk about skills development but are increasingly failing to address retraining in collective bargaining agreements.

In 2019, only 3 percent of employers’ contracts included language on worker retraining programs, down sharply from most of the past 20 years, including a peak of 20 percent in 2011, according to results of a Bloomberg Law survey.

That could spell trouble for companies seeking skilled employees, as well as workers themselves.

Some employers in the manufacturing industry are forced to turn away work if they can’t properly fill job openings with workers equipped with the proper skills, said Chad Moutray, chief economist for the National Association of Manufacturers. The organization represents employers in manufacturing.

The skills gap and retraining workers remain “the number one issue” for manufacturers, Moutray said.

“We’re not paying close enough attention to the changes that are being wrought within the economy that are going to render one set of skills obsolete,” Rutgers University labor studies professor Susan Schurman said. “The people are going to require a new set of skills to maintain their ability to support themselves and have a decent quality of life.” 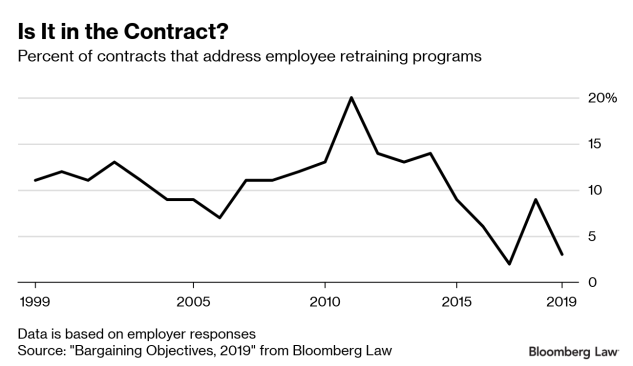 Economic growth is a strong predictor of whether retraining will be on the minds of employers and unions, the survey data suggest.

“Looking back at the last 20 years of survey results, there appears to be a correlation between economic downturns and the prevalence of retraining programs in union contracts,” Bloomberg Law analyst Robert Combs said. “For example, in our surveys from 2008 through 2014, in the aftermath of the recession, an average 13.8 percent of employers said their CBAs provided for retraining programs for workers. In the five years since, that average has fallen to only 5.8 percent of employers.”

The nation’s unemployment rate stayed near a 49-year low of 3.8 percent in March, and economic growth accelerated to 2.9 percent in 2018, as high as the annual rate has been since 2005, according to government data.

Job security provisions proved to be more prevalent in labor contracts than retraining programs in 2019, according to survey results. More than 40 percent of respondents said their contracts included provisions on extended recall rights, subcontracting restrictions, and advance notice of a plant shutdown.

The survey results could indicate how “workers are scrambling to stay alive during the recession,” University of Wisconsin-Madison law professor said. Rogers is also the co-director of COWS, a think tank that tackles social problems at the university. 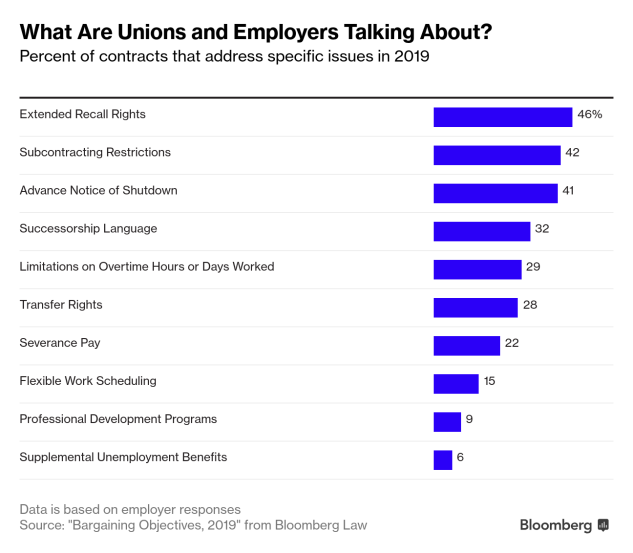 When unions address worker retraining, they do so for various reasons. Sometimes, it’s a reaction to layoffs and plant shutdowns or, in the case of the health-care industry, hospital consolidation, said Daniel Bustillo, the director of the Healthcare Career Advancement Program. H-CAP is a national network of Service Employees International Unions and health-care employers.

Over the years, smaller, community hospitals have merged with larger hospitals, making retraining a necessity in the new landscape, he said.

The focus on retraining workers in the workplace has been “part and parcel of the health-care industry for a long time,” Bustillo said. Retraining can include educating hospital staff in how to use new technology in medical care. That can include using electronic medical records or using telemedicine.

Other times, unions take a proactive approach by including worker retraining programs that prepare for anticipated changes.

The Culinary Academy of Las Vegas is Nevada’s largest joint labor-management training center for hospitality in the region. It’s jointly run by the Culinary and Bartenders Unions, a part of the nationwide UNITE HERE union, in 29 properties on the Las Vegas Strip and elsewhere in the city. The academy trains workers in various positions, including as cooks or in hotel operations, to advance their careers.

Preparing workers for a changing workforce is on the mind of UNITE HERE, the nation’s largest hospitality worker union. In 2018, the union negotiated contracts covering thousands of Las Vegas workers that require management to communicate with the union when considering bringing in new technology, such as self-service checkout kiosks or room service delivery robots.

The International Association of Machinists also has a bargaining framework it uses in negotiations where it’s likely the employer is looking to bring in new technology, said Jim Reid, the union’s director of apprenticeships, safety, and health. IAM bargains to retrain workers at risk of replacement so they can move up in the company rather than lose their job.

“Partnerships between businesses and community colleges and policy makers are needed to make sure everyone gets access to training they need. Unions are a very important part of that, but not the only part,” she said.

Unions and employers should be “equally invested” in implementing retraining programs for workers, Bustillo said.

“Is it happening enough? No. I think it could be accelerated,” Bustillo said.

The strong labor market in the U.S. may be pushing companies to hold off on pushing retraining initiatives.

There’s a fear among companies that retrained workers may be poached by other firms, negating the cost of any human capital investments, Rogers said.

That’s complicated even more by what Rogers calls a “fissuring of the workplace.” As companies constantly merge, acquire new entities, and structurally change, the parties to a union contract also change.

“You’ve got problems all over in accountability since almost nobody knows who their real boss is,” Rogers said.

The Trump administration has also been tackling the issue of company investment in training, asking companies to sign a Pledge to America’s Workers that they will dedicate resources to training and reskilling. So far, 207 companies and organizations have promised more than 6.7 million training opportunities.

But beyond educational opportunities, the entire attitude toward training is in need of a revamp, Schurman said. Retraining has to become a way of life given the pace of technological change.

“The solution going forward is that the idea of upskilling and training and adaptation to new methods and materials has got to be built into the fabric of the firm,” Schurman said.