The National Labor Relations Board seal hangs inside a hearing room at its Washington headquarters.
Photographer: Andrew Harrer/Bloomberg via Getty Images

The National Labor Relations Board’s Trump-era worker classification test has resulted in a higher rate of employee wins than the broader standard set during the Obama administration, according to a Bloomberg Law analysis conducted as the board considers ditching that more recent precedent.

The NLRB, administrative law judges, and regional directors applying the ostensibly more business-friendly legal test from the board’s 2019 ruling in SuperShuttle DFW found that workers were employees protected by federal labor law in 10 decisions, compared to just one opinion that the workers were independent contractors. The single contractor finding came in SuperShuttle itself.

Agency adjudicators use of the classification standard from the board’s 2014 decision in FedEx Home Delivery resulted in 17 rulings that workers were employees and seven that they were independent contractors.

Those case outcomes signal that striking down the SuperShuttle test and replacing it with the FedEx standard is unlikely to significantly drive up the percentage of decisions finding that disputed workers are employees. But it could spur more litigation over that question.

The higher rate of employee findings under the SuperShuttle shows that the two tests are similar, their multi-factor analyses give adjudicators wiggle room, and that employment classification is a fact-dependent question, legal scholars said.

“The board flipped to the SuperShuttle test, but we’re not seeing a bunch of cases declaring that workers are independent contractors,” said Jeffrey Hirsch, a University of North Carolina law professor and former NLRB attorney. “Even with a board that’s very pro-employer and even with a more pro-employer test, cases still went in the employee direction most times.”

The most significant application of SuperShuttle may have been in a general counsel’s office memo saying drivers for were independent contractors. That view was non-binding, but it effectively meant that the NLRB’s legal arm wouldn’t bring unfair labor practice cases or process union petitions from Uber drivers. 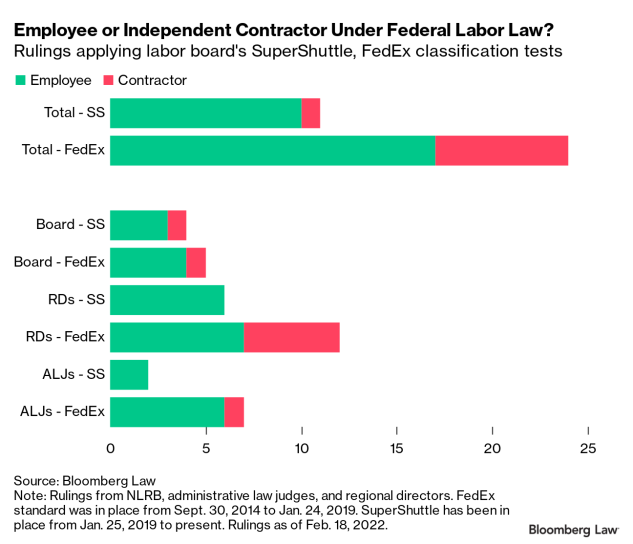 The differences in the frequency of rulings—the agency averaged one decision every 2.2 months under FedEx, compared to one every 3.3 months under SuperShuttle—suggests changing the standard is a way that Democratic- and Republican-controlled boards signal whether they’ll be more or less open to finding employee status, scholars said.

“The SuperShuttle ruling was a shot fired over the bow of unions,” said Michael Duff, a University of Wyoming law professor and former NLRB attorney. “The calculus for unions if the board changes the standard again is that it will be marginally easier to classify certain boundary workers as employees rather than independent contractors.”

The pace of regional director rulings involving union representation petitions suggests organized labor was more aggressive in attempts to organize workers with disputed employment classification under the Obama-era standard. Regional directors averaged one ruling under FedEx every 4.3 months, compared to one decision under SuperShuttle ever 6.2 months.

But many other factors beyond the NLRB’s employment classification test affect union organizing, labor and management litigation tactics, and the frequency of board decisions.

The impact of the coronavirus pandemic on NLRB operations may be responsible for the lower rate of classification rulings during the Trump administration, making it difficult to predict whether a new standard will drive litigation, said Kimberly Harding, an attorney with Nixon Peabody LLP who counsels unionized employers.

Workers deemed as employees under the National Labor Relations Act get unionization rights and other protections for group action to improve the workplace. Many companies use independent contractors in part to avoid the expense and legal liability that comes with employing workers.

Disputes over employment classification often involve drivers, as well as stage crew and other workers in the entertainment industry.

The NLRB, which flipped from a Republican to Democratic majority in September, announced in December its intention to revamp its employment classification test in a case involving a unionization bid at the Atlanta Opera Inc. In its invitation for public comments, the board asked for views on returning to the FedEx standard.

Both the Trump- and Obama-era tests use the same 10 factors drawn from common law, which include the amount of control a company has over the work, the skill required for the job, and how the worker is paid.

The two tests also consider a worker’s “entrepreneurial opportunity,” which stems from the U.S. Court of Appeals for the District of Columbia’s 2009 decision overturning the NLRB in an earlier employment classification ruling involving FedEx.

“What the D.C. Circuit did was elevate the factor of entrepreneurial opportunity above others, whereas the more traditional way was to make control of the work one of the most important factors,” said Joseph Slater, a labor law professor at the University of Toledo.

The NLRB said in its 2014 FedEx ruling that “actual” entrepreneurial opportunity is relevant, but that it needs to see that opportunity actually resulting in a worker conducting independent business activities for the factor to weigh on the side of independent contractor status.

The board switched gears in SuperShuttle, saying that it would “evaluate the common-law factors through the prism of entrepreneurial opportunity when the specific factual circumstances of the case make such an evaluation appropriate.”

Earlier this month, the NLRB received more than 40 briefs—including several focused on the gig economy—that weighed in on how the board should proceed. Employer groups were more supportive of the board keeping the SuperShuttle standard, while unions and workers’ rights groups advocated for a change, including some calls for a return to the FedEx test.

NLRB General Counsel Jennifer Abruzzo urged the board in her brief to return to its standard from FedEx, with a handful of refinements on issues like a worker’s capital investment in their job or why a company exerts control over the work.

“How the Board applies the independent-contractor exception has serious consequences for workers, whose full panoply of employee rights under the Act is at stake,” Abruzzo said.