Three more states are adopting or amending laws that would limit, if not prevent, businesses from using noncompete provisions to block low-wage workers from jumping to competitors.

Oregon, Nevada and Illinois bills passed in the states’ latest legislative sessions aim to blunt the increasingly prevalent practice and could be harbingers of federal regulation to come.

The clauses, ostensibly meant to guard employer trade secrets, also hamper workers’ ability to change jobs or find work in the same profession after a layoff. Ten states and the District of Columbia have taken steps to curb the use of noncompetes for low-wage workers in the past five years.

The latest legislative moves largely follow the advice of an Obama-era “call to action” on preventing abuse of noncompete provisions. In particular, they bar employers from requiring certain categories of workers to sign them, while the Illinois legislation also requires employers to give workers at least 14 days notice to consider the terms before having to sign—a requirement that Oregon law already imposed.

“Employers are going to have to think more critically about, ‘Who am I going to enter into these agreements with and what business interests am I trying to protect?’” said Elizabeth Rice, an attorney at Laner Muchin in Chicago.

The limits enacted by states likely follow a similar blueprint to any federal limits on noncompetes that might come out of the Biden administration, said Russell Beck, an attorney at Beck Reed Riden LLP in Boston who focuses on employment law related to noncompetes and non-solicitation agreements.

President said during his campaign that he planned to ban the use of employee noncompetes with the exception of those that protect trade secrets. Thus far in his term though, there’s been no movement on legislation in Congress or regulatory action from the Federal Trade Commission to restrict noncompetes nationwide.

And there’s no sign of imminent action on noncompetes from the administration, as the White House and congressional Democrats have been focused on a broad range of other policies, Beck said, but he predicted the issue won’t be forgotten in Washington.

“I do think the federal government will likely take some action,” Beck said. “I expect it would be a ban on the use of noncompetes for low-wage workers and perhaps notice requirements.”

Newly installed FTC Chairwoman Lina M. Khan—then a Columbia Law School fellow—co-wrote a law review article in 2019 with FTC commissioner Rohit Chopra that argued in favor of more active agency rulemaking on a wide range of anti-competitive business practices, including the use of employee noncompetes.

Khan also was previously legal director at the Open Markets Institute, which petitioned the FTC in 2019 to ban the provisions..

“Given the makeup of the Commissioners, I think her appointment could make FTC action on noncompetes more likely,” Beck said. 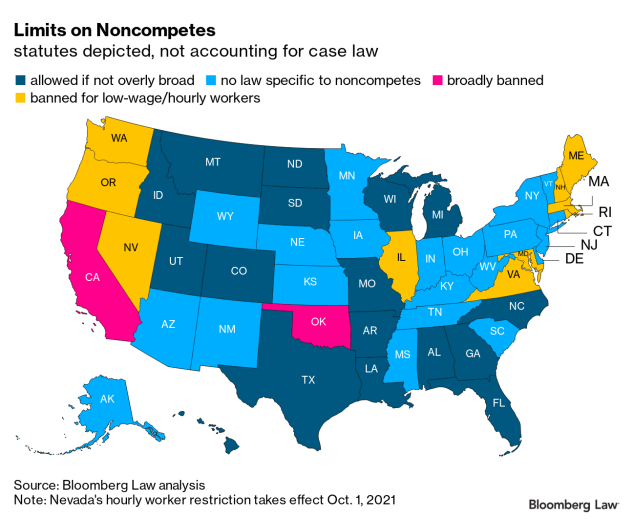 Illinois, Nevada, and Oregon join seven other states that have barred noncompetes for low-wage workers in the past five years, but with widely differing definitions of “low wage.” Bloomberg Law data shows the widely varying approaches that states take to limiting employee noncompetes, with California and Oklahoma outright banning their enforcement.

The District of Columbia went a step further this year, banning nearly all such provisos, with a few narrow exceptions.

In Illinois, a measure awaiting the signature of Gov. would bar employers from requiring a noncompete contract of any employee making less than $75,000 annually.

Legislation recently signed into law in Nevada bars them for all hourly workers. In Oregon, a new law prohibits them for workers earning less than $100,533 per year, with the threshold adjusting annually based on inflation.

For Illinois and Oregon, this year’s legislation amended restrictions already on the books by increasing the salary thresholds and imposing other rules.

The Illinois measure, for example, also bars enforcement of an existing noncompete contract on a worker laid off or furloughed for reasons related to Covid-19 unless the employer pays their former worker for the time period that they’re blocked from working for a competitor.

States also are beginning to enact provisions allowing for civil penalties against companies that use illegal or abusive noncompete contracts, and in some cases making it easier for workers to win attorney fees in court cases where employers seek to enforce noncompetes, said Evan Starr, a business professor at the University of Maryland who has researched and written on the contracts.

Penalties are a less common feature of state noncompete laws, but the idea could catch on as a way to deter companies from using them in situations where they’re illegal or unenforceable, Starr said. His research shows that even in California, where noncompetes are banned and unenforceable under state law, a significant portion of workers are asked to sign them anyway, he added.

“No court in California would sanction a noncompete agreement, and yet these agreements have chilling effects on workers,” Starr said. “Workers don’t want to fight out a lawsuit,” and in many cases might not know state law makes the contracts unenforceable.