The Equal Employment Opportunity Commission seal is displayed on a window at the headquarters in Washington, D.C.
Photographer: Andrew Harrer/Bloomberg

The U.S. Equal Employment Opportunity Commission collected an all-time high of $535.4 million in monetary recoveries during the last fiscal year for workers alleging discrimination, while filing its second-lowest total of merit lawsuits in more than two decades, according to the agency’s annual financial report.

The workplace civil rights agency reported the record highs and lows during a fiscal year that was filled with uncertainty for workers and employers due to the global Covid-19 pandemic and a tumultuous presidential election campaign.

The agency’s Fiscal 2020 monetary recoveries include awards from settlements, mediation, and conciliation. EEOC lawsuits accounted for $106 million of the total, the highest amount it has obtained through litigation in over 15 years.

Landmark discrimination settlements from the past fiscal year, which ended Sept. 30, include a $20.5 million pact with Jackson National Life Insurance Co., the largest obtained through agency litigation in more than 10 years. also settled agency allegations of sex bias, agreeing to pay $20 million in August.

“When our inventory levels are manageable, investigators have the time to really dig in to meritorious charges, do more thorough investigations, do more analysis, and then they’re able to either conciliate those charges successfully, or hand them over to our litigators in a strong position,” Dhillon told Bloomberg Law in an interview.

Dhillon attributed the drop in merit suits to the “ebb and flow” of litigation from year to year. She added that she prefers quality of lawsuits filed, over quantity.

“Cases have a cycle,” she said. “We’re moving through those cases and we’re resolving them, so our litigators were focused on that.” 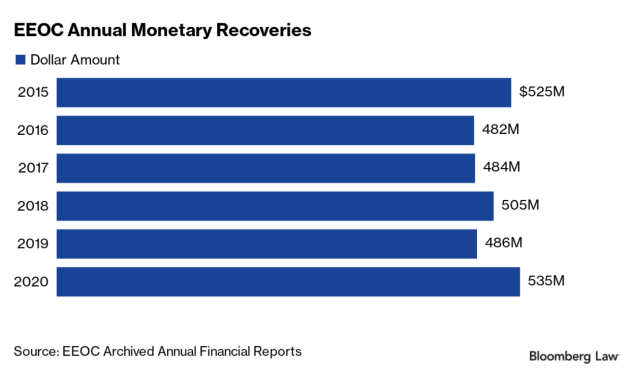 Dhillon credited the year-end outcomes to “strategic investments” made to help agency staff, as well as the staff’s ability to “adapt to changing circumstances.”

The agency lowered its inventory of private-sector worker charges of discrimination to 41,951, a decrease of 3.7% from the prior fiscal year, according to the report.

Dhillon credited the decrease to a classification system that prioritizes charges workers submit to the agency, and to initial interviews EEOC staff members conduct with workers who are interested in submitting a discrimination charge to the agency.

“It’s helpful because it allows us to assess charges and to apply appropriate resources to charges,” she said of the classification system. “If we are managing our inventory correctly, we are setting up everybody in the agency for success.”

The EEOC filed 51 fewer merit lawsuits during the last fiscal year as compared with the prior year. 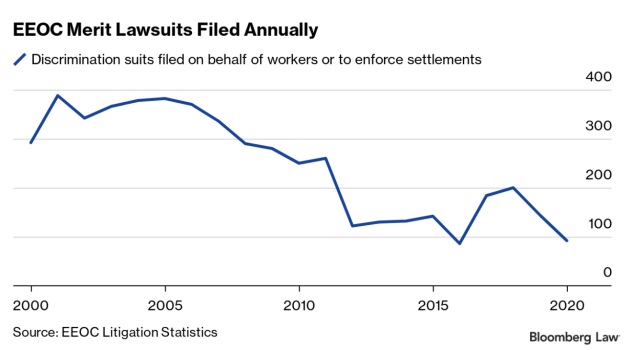 Dhillon previously said litigation should be pursued as a “last resort,” and has shown a preference for alternative bias resolution methods, such as conciliation and mediation.

“I’m also pleased by the results that our litigators got,” she added, “because if we can do a good job of identifying meritorious charges, conducting a good investigation, and giving our litigators a good body of work to work with, they’re going to be more successful.”