Halfway through the fiscal year, the Equal Employment Opportunity Commission has collected more money through settlements, but filed fewer lawsuits than in fiscal 2018.
Photographer: Xaume Olleros/Bloomberg via Getty Images

The Equal Employment Opportunity Commission is mid-way through its 2019 fiscal year, and it has sued less often but has collected more money through settlements.

The agency filed 24 new lawsuits and has collected more than $21 million in settlements from Oct. 1, 2018, through March 31.

The new lawsuits are nine fewer cases than the job rights watchdog had filed at the mid-point of its fiscal 2018. The settlements obtained, however, top last year’s mid-way tally by more than $7 million.

That’s quite a performance for an agency that had to scale back operations during the government shutdown. It’s also been functioning for more than 27 months without a full complement of commissioners. Since Commissioner Chai Feldblum (D) left the agency, the EEOC has lacked a quorum of three members, further restricting its efforts.

The agency collected $5.3 million during the first six months of its current year in the six settlements in which race discrimination was among the allegations. That included a $4.9 million pact with the City of Jacksonville to settle allegations that it firefighter promotional exams had a racially disparate impact on blacks.

It also obtained more than $4.9 million in two cases that included religious bias claims and $4.3 million in 16 disability discrimination settlements. United Parcel Service Inc. paid $4.9 million to resolve claims that it failed to hire or promote workers who wear beards or long hair for faith-based reasons in one of the religious discrimination cases.

The EEOC’s push to enforce sexual harassment protections during the #MeToo era saw it secure $2.1 million in nine harassment settlements. And it collected $2.3 million in four cases that included pregnancy bias allegations and $237,302 in four that alleged sex-based pay discrimination. Another $3.8 million was obtained in six lawsuits in which sex discrimination other than sexual harassment, pregnancy discrimination, or unequal pay was claimed. That includes a $3.6 million deal with Sherwood Food Distributors LLC for a class of female applicants allegedly denied jobs at the company’s Cleveland and Detroit warehouses.

In all, nine lawsuits furthered the EEOC’s workplace harassment crackdown—two racial harassment, one national origin, and one disability to go along with the five sexual harassment cases. 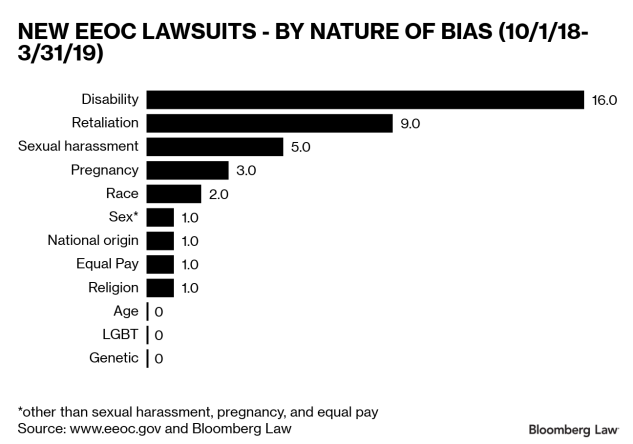 In the first half of fiscal 2018, by comparison, the agency brought 14 new cases alleging disability discrimination and five accusing an employer of sexual harassment.

Restaurants remained a prime target for the EEOC at the outset of fiscal 2019, with five new suits filed against eateries.

Nineteen of the 24 new lawsuits were filed on behalf of single workers. Of the 33 filed by the EEOC at the mid-way point last year, 12 were for more than one worker.

Employers in the Southeast were more likely to to be sued by the EEOC in the first half of fiscal 2019 than those elsewhere. Nine of the new lawsuits were filed by EEOC regional offices in that part of the country.

The agency’s Atlanta regional office filed the most new suits—four. The San Francisco and Chicago regions were next with 3 each. 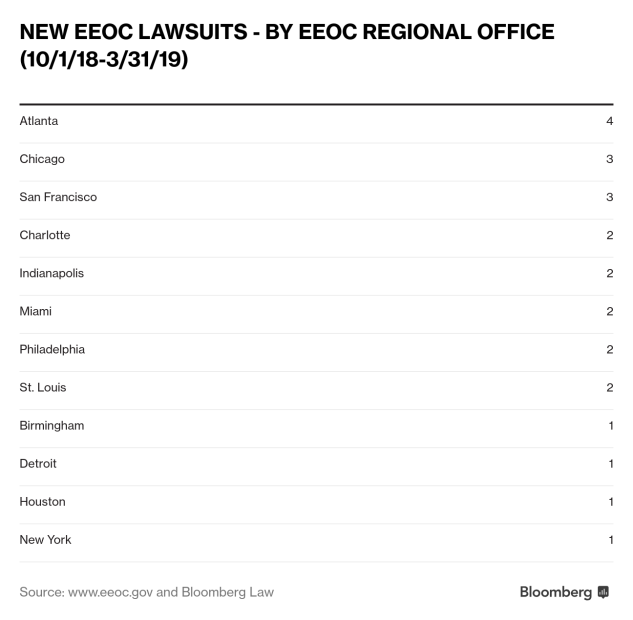