As much as 72 percent of the company’s U.S. hourly workers were leaving their jobs each year. The company launched an employee survey to get to the bottom of why so many were heading for the exit.

Guards overwhelmingly responded that they were having trouble making ends meet.

“Not only were the wages problematic, but so was waiting for the two-week pay cycle,” Chief Human Resources Officer Geoff Gerks says.

So G4S joined a growing group of companies, such as , , , and Boston Market Corp., that offer their employees the power to access at least some of their paychecks ahead of the traditional two-week period. Gerks says that move, and a push to increase wages for security workers in new contracts, was an “easy decision” in a “challenging labor market that’s very, very competitive.”

As the job market tightens, businesses—especially in low-wage industries—are looking for new ways to attract and retain employees. That’s created opportunities for Silicon Valley tech startups pitching app-based early pay services to ease some of the pain for workers who live paycheck to paycheck.

“These funds are for work that they’ve already done that they can use to navigate life’s unexpected events,” Wal-Mart spokeswoman Michelle Malashock says. The company has partnered with two early pay providers, Even and PayActiv. “When our associates are more financially secure, they are better able to do their jobs.”

The rise of early pay options follows similar moves by gig companies such as and , which allow drivers to cash out multiple times per day. It could challenge the traditional pay cycle and help people avoid high-interest loans and credit card bills.

But some fear that early pay providers may be payday lenders in sheep’s clothing. Speeding up pay cycles could mask a larger problem: stagnant wages.

“The smoothing of pay availability over a pay period is advantageous to people who have very little savings,” Chris Tilly, a labor economist at the University of California Los Angeles, told Bloomberg Law. “What it doesn’t address is why those people have very little savings in the first place. Low pay is low pay, and this is being intensified by increasing housing, health care, and other costs in many places.”

Meanwhile, early pay companies are trying to navigate a legal and regulatory minefield. That includes banking, tax, and employment issues that some states including California—where many early pay providers are based—and New York, are just beginning to consider. Those states could be the first to regulate a burgeoning industry that has yet to get the attention of Congress and federal agencies.

Early pay providers operate under two models. Some, like DailyPay and PayActiv, partner with companies to offer employees advance wages in exchange for a monthly or per-transaction fee. The third-party provider fronts the money—it doesn’t transfer money from the user’s employer—and then takes the cash back from users either directly out of their next paychecks or through a bank account debit on payday. Some companies subsidize part of the cost, but employees in many cases are on the hook for transaction or membership fees.

Others, such as Earnin, Dave, and Brigit, offer services directly to end users. Those providers recoup the advanced funds directly from user’s bank accounts on a set date.

Certain providers have added an income stream by partnering with prepaid card services. Dave and PayActiv offer reloadable Visa cards on which the users can get advance pay transfers. 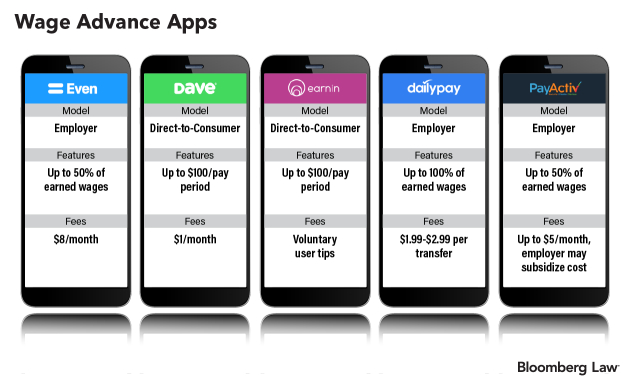 Some 350,000 Walmart workers use the Even app to manage their finances or get paid ahead of schedule, according to Malashock. The app has performed more than 5 million transactions totaling $900 million since the Walmart program launched in December 2017.

Early pay services are similar to installing an ATM in an office lobby, says Jason Lee, the co-founder of DailyPay. The company has partnered with G4S, Westgate Resorts, Kroger, , and others in exchange for a fee of $1.99 to $2.99 per transaction.

DailyPay currently has about 500,000 users, who make 1.2 transactions per week. Users take about $66 in early wages per transaction, the bulk of which come at the end of the month. That means the average user spends a maximum of $3.60 a week in early pay fees.

The primary players in the early pay market have largely targeted low-wage industries. DailyPay’s Lee and Jon Schlossberg, the CEO of Even, say they see the market also moving into the white-collar workforce.

Nearly 40 percent of Americans don’t have $400 in their bank accounts, according to a 2019 Federal Reserve study. That leaves them turning to credit cards and payday loans that often come with high interest rates. For payday loans, the repayment cost is often triple the amount of the money borrowed or more, despite federal and state efforts to cap the rates. 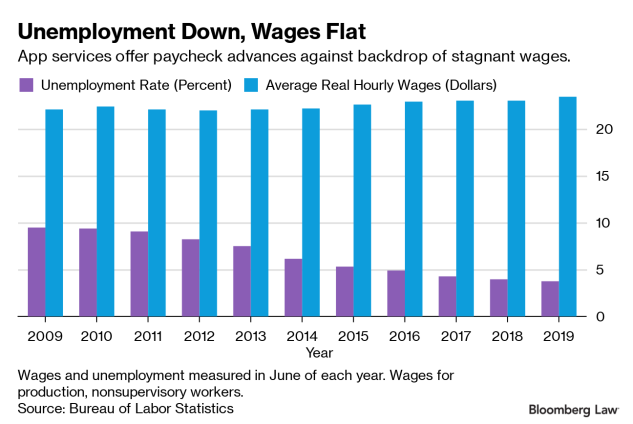 But some are concerned that moving up pay dates doesn’t address the problem of why people are living paycheck to paycheck in the first place.

State laws were enacted to force employers to pay their workers regularly, but partnering with early pay providers doesn’t cost many of them a penny, Schneider says. Because early pay providers front the money to users and then take it back directly, employers can continue to process payroll on the two-week cycle without losing interest on the money they pay workers or taking on new tax and accounting burdens.

“It’s not a gold standard to pay every two weeks,” Schneider says. “It’s just that employers would otherwise be delighted to delay paying their workers.”

Lawmakers in California are tinkering with legislation that would set some basic rules of the road for early pay providers.

A bill passed by the state Senate in May would cap early pay transaction fees at $14 per month and limit those transactions to three per pay period and 50 percent of a worker’s unpaid earnings. The measure, backed by PayActiv and other early pay providers, would also prevent those companies from being regulated like credit services.

“The Senate bill favors the industry by not allowing them to be treated as a financial institution,” Pedro Ibarra, a former PayActiv operations director, told Bloomberg Law. Ibarra recently sued PayActiv, alleging that he was fired after blowing the whistle on the company.

Ibarra questioned PayActiv’s practice of allowing users to get advances of money they haven’t yet earned, according to the lawsuit. He said that made PayActiv a traditional lender, subject to federal and state restrictions and required to disclose fees as interest charges.

“Doing that has the potential to create an ecosystem of users that are trapped in there because they keep taking money out that they have to pay back later,” Ibarra says.

PayActiv Chief Operating Officer Ijaz Anwar called the lawsuit “spurious and without merit,” in a statement provided to Bloomberg Law.

“In some cases (less than 5%) an employee can spread the payroll adjustment over two pay periods,” Anwar said. “This option is in place to give users more control of their finances. For example, if a user has an emergency that necessitates a $400 transaction during one pay period, having the ability to designate a $200 adjustment over two pay periods helps them better manage their cash flow and avoid more expensive alternatives such as late fees or overdraft charges. When this happens, the user’s ability to access earned wages in the next pay period is reduced by $200 to ensure that the paycheck guardrails remain in place.”

The company, which says it has processed more than $1 billion in early wages for some 650,000 users, has yet to respond to the lawsuit, which was filed July 2 in Santa Clara County Superior Court in California.

New York’s Department of Financial Services in March reportedly subpoenaed another early pay provider—Earnin—seeking information about the company’s business model. Earnin doesn’t partner with employers to offer its services and it takes the money back directly from users’ bank accounts. The company charges a suggested “tip” of up to $14 per transaction.

Laws in California, New York, and a handful of other states tightly limit the deductions that can be made directly from workers’ paychecks. Early pay providers in those states get around those limits by requiring users to sign agreements allowing them to automatically debit the fronted funds from their bank accounts on payday.

The services are also designed to avoid tax implications for employers. By fronting the money to a user—instead of transferring it from the user’s employer—the payments aren’t considered “constructive receipt” of wages under federal and state tax laws. That means the employer doesn’t have to immediately withhold income taxes or kick in Social Security and other employment obligations to Uncle Sam.

In other words, the transactions are tailored in a way that doesn’t disrupt the traditional two-week pay cycle.

“Payroll is not going to change,” DailyPay’s Lee says. “The company still runs payroll every two weeks, but the employee gets to access the pay whenever he or she wants.”

—With assistance from Lydia Beyoud.

To contact the editors responsible for this story: at csaenz@bloombergtax.com; at thyland@bloomberglaw.com