U.S. Labor Department leadership has tightened oversight of its internal trial court by requiring judges to provide data on how long it takes them to reach decisions, a move that could boost efficiency but raises questions about how the information will be used.

The department’s Office of Administrative Law Judges, which handles cases in eight districts nationwide under a range of federal workplace laws, must send quarterly case-inventory reports to the secretary’s office, Deputy Labor Secretary Patrick Pizzella wrote in a memo to the chief judge that was quietly posted on the office’s website.

The quarterly reports, the first two of which are now publicly available, don’t represent a major departure from past practice or, on their face, undermine the longstanding principle of federal administrative law judges operating independently of an agency’s political leadership, five current or former ALJs and three administrative law professors told Bloomberg Law. But emphasizing turnaround time could allow internal judges to be squeezed for partisan reasons, seven of those sources warned.

There’s reason to be skeptical of the department’s intentions until more is known about how DOL plans to leverage the data, four of the five current or former ALJs said. Most requested anonymity to speak candidly. They referred to the context of a 2018 White House executive order that empowered federal agency heads to appoint ALJs, a change that judges criticized as a breach of their autonomy.

“I still don’t see it as crossing the line, but if I were an ALJ I would be nervous,” Richard Pierce, an administrative law scholar and professor at George Washington University Law School, said. “It depends on how much you trust the people you work for and with.”

The 2018 executive order sparked backlash because it removed the more neutral “competitive service” hiring process for ALJs that the Office of Personnel Management had administered. This also meant judicial applicants were no longer required to pass a rigorous exam before being considered.

One fear raised by DOL’s action, which not all current and former judges interviewed by Bloomberg Law agreed was valid, is that collection of quarterly reports could be a first step to oust less-productive judges and replace them with conservatives favored by the Trump administration.

Labor Secretary Eugene Scalia, speaking at a virtual conference Oct. 1, said the project is motivated by the concept that “justice delayed is often justice denied.”

“We want to monitor how promptly cases are resolved and closed, as one part of furthering fair and just treatment,” Scalia added. He noted that federal court judges are required to compile similar reports. 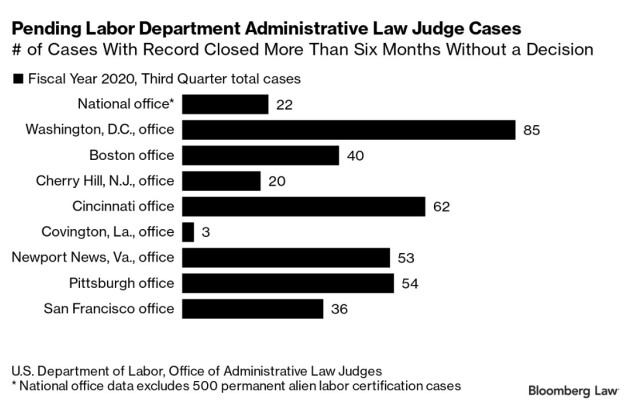 A department spokeswoman declined to specifically address questions about how the data would be analyzed and whether it could be used as a basis to remove or discipline judges who clock slower turnaround times.

The bulk of the office’s caseload stems from disputes over workers’ compensation and other benefits involving coal miners who develop black lung disease, longshoremen and harbor workers injured on duty, and civilian military employees stationed overseas who suffer workplace injuries.

How Will Data Be Used? 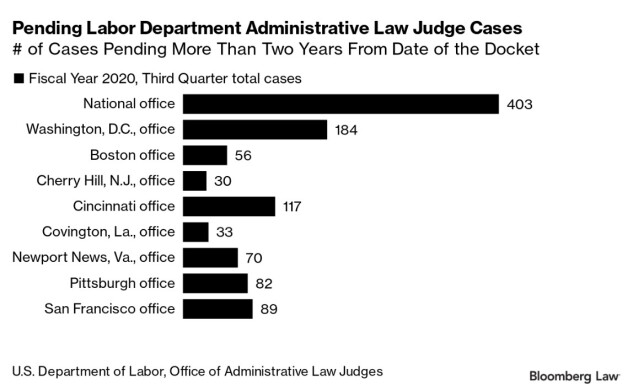 That is essentially a more formal, transparent, and slightly more detailed version of case statistics DOL leaders have been interested in collecting from the ALJ national office for decades, several former officials said.

Previously, the department’s judicial office supported the compilation of these records because the secretary’s office could use evidence of lingering cases to justify spending requests to hire more judges.

But while fast resolution can aid litigants, in many of the more complex disputes that DOL judges hear, setting a timer for resolution could adversely affect the quality of case decisions, the five current or former ALJs told Bloomberg Law.

“It’s all in how are you interpreting the data, whether you are going to dig behind the data to see what it really reflects, and what use you are going to put to the information,” said Marilyn Zahm, who retired last year as a Social Security Administration judge, where she was president of the union for SSA jurists.

“Quite frankly, I would be afraid of what use the information is being put to in this administration, because certainly in Social Security they had a very bad record regarding data,” Zahm added.

At SSA, judges have been brought up for removal because they weren’t deciding a sufficient volume of cases, she added.

Pierce, the law professor, said the department could use the reports constructively—for instance, to improve performance by holding a mirror to the process and allowing for a comparison with peers at other agencies.

“It’s very useful to the lawyer and the lawyer’s client to know this judge doesn’t get around to issuing decisions for awhile,” Pierce added.

Yet if DOL were to establish decision quotas for its administrative judges, on par with what the Justice Department demanded of its immigration judges in 2018, that would be an inappropriate use of the data, Pierce said.

Such use would speak to an issue several retired ALJs raised in interviews with Bloomberg Law—namely, that a DOL judge’s docket varies widely, without commonalities between cases. This makes it difficult to conduct a quantitative analysis of case length that accurately measures the quality of the judge’s performance, they said.

“The Department believes that quality and timeliness are both important for adjudications,” the DOL spokeswoman said, adding that five ALJs were hired recently to facilitate faster decisions.

But if quality is being prioritized, Zahm said, then DOL leaders should ask for nonquantitative metrics as well.

“It’s disturbing to see the information that the DOL wants to collect,” Zahm said. “I don’t see anything in there that would indicate they’re looking at quality, because of course that’s harder to measure—which doesn’t mean you shouldn’t measure it; it just means you should ask different questions.”