Union filings to the NLRB alleging unfair labor practices have fallen nearly 11 percent in the last two years. Some unions fear the now GOP-majority labor board will rule against them.
Photographer: Scott Olson/Getty Images

Two-plus years into the Trump administration, labor unions are more often choosing to forego one of the primary tools they use to push back against companies they feel are mistreating workers or failing to bargain in good faith.

Union filings of unfair labor practice (ULP) charges to the National Labor Relations Board have fallen by nearly 11 percent since President took office, according to NLRB data obtained via a Freedom of Information Act request. Some unions have withdrawn unionization petitions as well as cases pending before the board, including some cases where an agency judge initially ruled in their favor.

The pullback comes at least in part because unions are worried the GOP-majority board will rule against them or that their case could even become a vehicle for the NLRB to establish new legal precedents that would disadvantage workers with a similar case down the road.

“We don’t want to go into a legal battle and set a precedent that would ultimately jeopardize the union rights of folks across the country,” Megan Piccirillo, a spokesperson for the Service Employees International Union Local 509, told Bloomberg Law. The SEIU local had been pushing an organizing petition for non-tenured faculty at Northeastern University, but dropped the effort because organizers feared the NLRB could use their petition to rule that non-tenured faculty are “managerial workers,” a category exempted from the NLRA’s rights and protections.

Filing ULP charges is “actually dangerous,” Communication Workers of America President Chris Shelton said at a labor event earlier in the year. The CWA represents over 600,000 workers in telecommunications, news media, and other businesses. Bloomberg Law reporters are represented by a CWA-affiliated union.

“You have to be very careful,” Shelton said. “And we have just about stopped going to the NLRB to file unfair labor practice charges because it backfires almost always now because of Trump’s NLRB.” The CWA declined to make Shelton available for comment after the event and declined a response to later inquiries.

In general, ULP filings have been declining since 2002, following increases in 2000 and 2001. The number of ULPs filed by companies, individuals, and unions hit a high in 2002 at about 33,000 charges, according to NLRB data. But the downward trend has accelerated in the last two years. 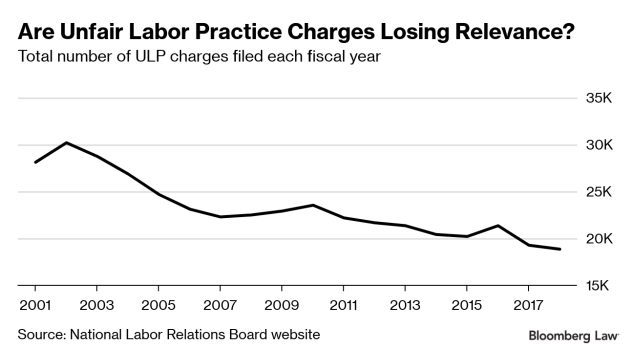 Unions, individual workers, or companies can file ULP charges if they believe their rights under the National Labor Relations Act—the central federal law about unionization—are being infringed on. The most consequential cases often allege that a business has interfered with or retaliated against employees working to join a union—disputes that often decide whether a workplace will become unionized or not.

Regional NLRB offices investigate charges and can dismiss them or issue a formal, government-backed complaint if there’s merit to the allegations. Parties can appeal those decisions to the full board in Washington, which ultimately decides how the NLRA will apply in practice. ULPs also are filed to compel companies to bargain with their employees’ union, obtain financial damages for illegal labor practices, and to prevent employers from changing policies without consulting the union. 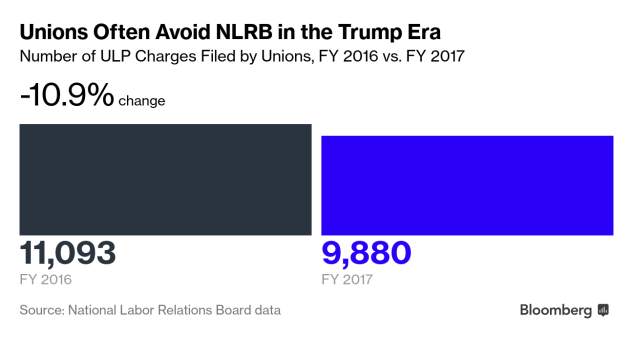 In some cases, unions tried to keep issues away from the board they feared could be a vehicle to reverse existing precedent.

Unions settled a handful of cases after noticing that board General Counsel allegedly was looking for an appropriate case to limit unions’ use during protests of an inflatable balloon known as Scabby the Rat. Robb ultimately revived a case that had been dismissed, took the issue to federal court, and is arguing that use of the inflatable rat should be unlawful in most circumstances.

In another case, a Pennsylvania union claimed Loshaw Thermal Technology, LLC was refusing to bargain with the International Association of Heat and Frost Insulators and Asbestos Workers, Local Union No. 23. An agency administrative judge ruled in favor of the union based on several key precedents about collective bargaining in the construction industry.

The company appealed the decision to the NLRB, which then asked for public input on whether it should change existing rules. Those rules permit construction companies to withdraw from what’s known as a pre-hire agreement with a union once it expires, but compels them to maintain the bargaining relationship unless the union loses majority support among employees.

The union local withdrew its case in an apparent attempt to avoid an appeal where the NLRB may have changed that precedent.

“Although a complaint was issued and an Administrative Law Judge found that an unfair labor practice had been committed, the employer has done nothing to remedy the violation. And, now I understand that the Board has asked the public for briefs on how this case should be decided,” the union’s business manager said in a letter to the NLRB, adding that the union has limited resources and requesting “withdrawal of the charge.”

“As far as filing charges, there’s a lot of cases that’ve come across my desk where I’ll say it’s a waste of time,” said David Rosenfeld, a Weinberg Roger & Rosenfeld attorney who’s represented unions before the NLRB since the mid-1970s. In certain types of cases, unions aren’t likely to get a favorable ruling, “like rules cases, anything challenging an employer’s workplace rules,” he said.

Fear of the Republican-controlled NLRB also is affecting organizing drives to form or join a union. Workers can ask the NLRB to administer an election to form a union by filing what’s known as a “representation petition.”

Multiple organizing bids involving different faculty or student organizers recently were abandoned once it became apparent the board could use those cases to establish new precedent that wouldn’t favor workers or unions.

Last year, student organizers at Grinnell College in Iowa withdrew a petition to unionize all undergraduate workers after the school promised to challenge the inclusion of certain categories of employees. Organizers worried the board would use the case to reverse an Obama-era ruling that gave student-workers union rights.

Other unions and workers—including the Northeastern group—have tried seeking voluntary union recognition by universities, or having union elections administered by third parties to work around the NLRB. 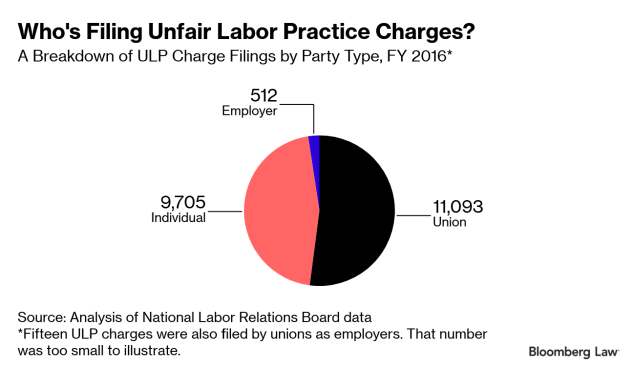 Not all unions see the labor board in its current makeup as a threat.

One of the top lawyers at the International Association of Machinists, which represents over 570,000 members, said any changes instituted by the NLRB will take so long to go into effect that they could be amended by 2020 if a Democrat wins the presidency.

“I can’t think of a circumstance where we’ve hesitated to file a ULP charge because of current changes in the law that the Trump board has initiated,” IAM Associate General Counsel William Haller said.

According to NLRB records, the Machinists Union has filed about two dozen ULP charges against after it refused to negotiate with a group of technicians and inspectors in South Carolina that voted to unionize last year. An appeal by Boeing is pending at the NLRB.

“I think we have a lot more distrust of Peter Robb, the general counsel, and what the board’s going to do on many issues,” Rosenfeld said. 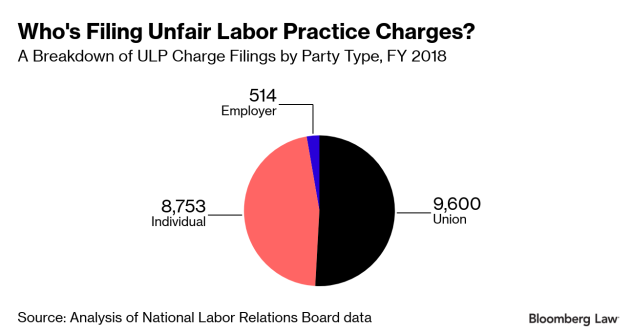