School bus drivers in Rhode Island, with the help of the National Right to Work Legal Defense Foundation, will ask the NLRB to overturn a regional director decision rejecting the drivers' bid to eject the Teamsters union. A ruling in their favor ultimately could make it easier for workers across the U.S. to decertify unions they want to force out.
Photographer: David McNew/Getty Images

School bus drivers in Rhode Island who want to force out their union hope the National Labor Relations Board can help. In the process, their case might add to a broader effort to make it easier for workers across the U.S. to decertify unions they want to eject.

The National Right to Work Legal Defense Foundation has said it will appeal an April ruling by an NLRB regional director who rejected some First Student Inc. workers’ bid to cut ties with the International Brotherhood of Teamsters. That ruling turned on the board’s policy banning decertification votes at local union affiliates that were later merged into a single group. The Teamsters already had merged the Rhode Island drivers’ local union and several others into a single nationwide unit for First Student employees.

The merger policy at issue in the First Student case is one of about a half-dozen obstacles that can stand in the way of dissatisfied workers who want to vote out their unions. And most of them are in the crosshairs of both the Right to Work Foundation—a potent opponent of union power—and the NLRB.

A change in the merger policy coupled with a broader review of other limitations on kicking out unions could slow the recent trend showing fewer worker-filed decertification votes, which have fallen by some 40 percent in the last 10 years.

GOP board members already have said they’re open to reconsidering current precedent on when workers can eject a union. The board also is considering changes to other restrictions on decertification elections.

The board has wide latitude to address many of the decertification rules. One hurdle to such elections is statutory. The National Labor Relations Act prohibits holding more than one election for the same group of workers in any 12-month period. But the NLRB’s merger rule and other restrictions on decertification votes stem from board decisions and can be changed by the agency’s leadership.

One of the most significant limits to decertification is what’s known as the contract bar. It prevents challenges to a union’s majority status while a collective bargaining agreement is in effect, outside of a short window near the end of the contract period. Other rules impose restrictions linked to companies voluntarily recognizing unions, employer-union settlements, the takeover of a unionized operation by a new company, and allegations of unfair labor practices.

The general principle animating most restrictions on decertification elections is that unions can’t function properly or demonstrate their worth if they’re constantly fending off attempts to eject them.

“They’re longstanding and promulgated by the board,” said Boston-based labor attorney Michael Anderson of Murphy Anderson. “They’re basically essential to the operation of the National Labor Relations Act.”

“I think what employers want most is a system that treats decertification on equal footing as a union election petition,” James Plunkett, government relations counsel at management-side firm Ogletree Deakins Nash Smoak & Stewart, told Bloomberg Law. “That sort of equal playing field would be good policy.” 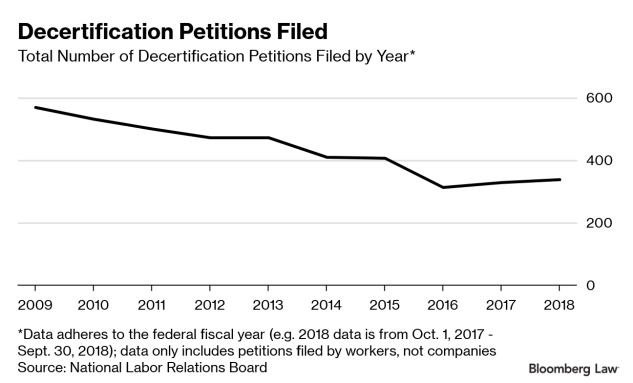 Employee efforts to kick out their unions start with gathering signatures from like-minded co-workers. Once at least 30 percent of the workers represented by the union sign on, workers can ask their employer to file for a decertification election or file a petition on their own.

Broader trends and developments are responsible for some of that reduction in petitions filed, said Patrick Semmens, spokesman for the National Right to Work Foundation. Overall unionization rates have declined and more states have adopted “right to work” laws prohibiting mandatory fees from nonmembers, eliminating some of the impetus to oust unions, he said.

Yet that drop also was driven by the various bars to decertification elections, particularly those instituted in recent years, Semmens said. The National Right to Work Foundation represents workers in dozens of decertification petitions filed each year, and it helps out many more with information and guidance on an informal basis, he said. 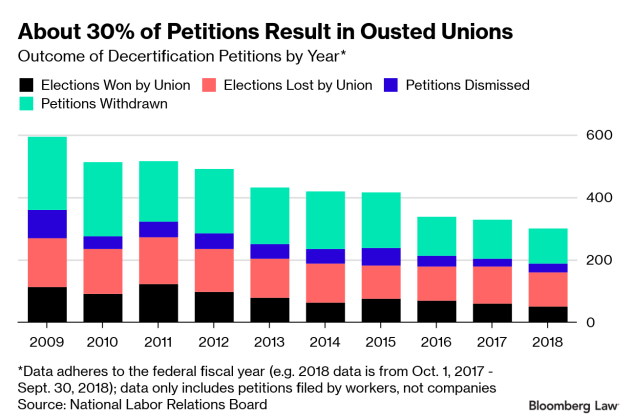 There are other ways to get rid of a union.

Employers can unilaterally withdraw recognition if they have proof the union has lost majority support, such as signed petitions or worker statements. The NLRB recognized the right to withdraw recognition—known by some labor law lawyers as “riding bareback”—in its 2001 decision in Levitz Furniture.

The board’s general counsel appointed by the Obama administration opposed that interpretation of federal law in 2016, saying that experience had shown it “did not effectuate the purposes of the act.” But the NLRB’s current General Counsel reinstated the policy shortly after taking office.

The union challenged the hospital’s move at the NLRB, which could give the GOP-majority board an opportunity to cement Robb’s policy of allowing unilateral withdrawals.

Absent employers unilaterally withdrawing recognition, however, workers and companies seeking to rid themselves of unions must contend with the various rules that delay or prevent decertification elections.

The blocking-charge policy is the decertification limitation that has mostly likely lost support from the NLRB majority, attorneys on both sides of the aisle agreed. That policy allows NLRB officials to pause the decertification process if workers file an unfair labor practice charge alleging the employer took steps to coerce workers into voting against the union, or otherwise interfered to create unfairness in the voting process.

“To me, the blocking charge is basically black and white—there’s an effort to get rid of the union, and the union uses a blocking charge to extend that effort,” said Russell Brown, head of the Center for Independent Employees, which represents workers looking to rescind their union membership.

But Anderson, who has represented labor unions during decertification campaigns, said blocking charges are an essential element of the NLRA. Allowing decertification petitions to go forward in the midst of unfair labor practices would amount to rewarding employers for bad behavior, he said.

“The processing of unfair labor practice litigation is regrettably slow,” Anderson said. “But guess what? It’s the unions who have been clamoring for 50 years that this is a basic thing that’s broken about the system.”

That proposed rule also will take on the board’s “voluntary recognition bar,” which says workers must wait at least six months before they can file decertification petitions targeting unions that employers had voluntarily recognized as their exclusive bargaining representatives.

Signaling their willingness to rethink another decertification obstacle, two of the board’s Republican members said last fall that they’re open to reconsidering the “settlement bar.” That rule says that when an employer and a union reach a settlement that calls for bargaining on a labor contract, that union’s majority status can’t be challenged until a reasonable amount of time has elapsed.

Nevertheless, the National Right to Work Foundation sued the NLRB about a month later in federal court to challenge the settlement bar. The lawsuit is ongoing.

In its opposition to the NLRB’s merger policy in the First Student case, the foundation says that agreements between unions and employers can stand in the way of workers’ right to challenge the union’s majority status in their workplace.

A union’s ability to combine locals—and potentially stave off decertification elections via a merger—depends on its constitution and bylaws, said Joseph Farelli, an attorney with the union-side law firm Pitta. The Teamsters, UNITE HERE, and SEIU are some of the unions that empower their presidents to unilaterally merge locals, he said.

“So let’s say an international merges two or three unions,” Farelli said, “now it becomes harder to decertify the unions.”