The country’s largest labor federation has told its member unions that four possible contenders for labor secretary are drawing support within the ranks, an emerging political fault line for President-elect to navigate.

The four names on the AFL-CIO’s preliminary list all have important qualifications for the post, and all are White men. They are Seth Harris, a deputy labor secretary during the Obama era, two members of Congress—Reps. (D-N.J.) and (D-Mich.)—and Boston Mayor Marty Walsh, according to five sources familiar with discussions that produced the list.

Walsh and Levin have more solidified union backing, having already drawn public endorsements from powerful unions within the AFL-CIO fold, a network that represents some 12 million workers.

Biden is a staunch advocate of unions, whose leaders are quick to point out that a union official hasn’t been tapped to run the U.S. Labor Department since President Richard Nixon’s ill-fated second term. But Biden also has pledged to assemble the most diverse Cabinet in U.S. history.

“Literally every trend that we see in the economy right now is hurting communities of color more—we have Black unemployment double to White unemployment, essential workers who are at risk of Covid in their workplaces are disproportionately women of color,” said Rachel Deutsch, a senior attorney for worker justice at the Center for Popular Democracy. “I’m sure that any of these candidates would bear that in mind, but having somebody for whom that is automatic because of their own experience is truly invaluable.”

This dynamic presents a crucial test for Biden, who must balance demands for diversity with pressure from organized labor to install a labor secretary that meets unions’ approval.

The AFL-CIO’s list was shared during a Tuesday meeting of affiliate unions. It wasn’t clear if it had since been shared with the Biden transition, which is working toward rolling out initial Cabinet announcements in coming weeks. Biden said Thursday he’s decided on a Treasury pick.

In recent weeks, presidents of a handful of AFL-CIO affiliates began advocating for Walsh, a former Boston construction union leader, or Levin, who was re-elected this month to his second term in Congress after more than a decade as an AFL-CIO organizer.

At the same time, some Democrats and worker advocates have criticized labor leaders for failing to offer early support for a female or minority candidate. Their frustration was compounded by the fact that the next DOL leader will have a meaningful chance to make policy decisions to target gender and racial inequality in the workplace, fulfilling a Biden campaign pledge.

Union representatives at the meeting were given an opportunity to oppose the recommendations. Debate ensued over preferred options for other Cabinet posts, but nobody voiced concerns about Walsh, Levin, Norcross, or Harris, three sources said.

Indeed, some union representatives may have held their fire because they had yet to report the recommendations back to their leadership, two sources said.

The participants did discuss the importance of submitting a diverse assortment of picks overall, but not specifically for labor secretary, one source said.

Other potential labor secretary candidates who didn’t get backing at the virtual gathering but who have appeared on other advocates’ lists for the job include California Labor Secretary Julie Su, Howard University economics professor William Spriggs, and Obama-era DOL official Sharon Block.

Apart from the diversity issue, the crowded list of union-favored contenders may further complicate the AFL-CIO’s goal of presenting a united front as a means of maximizing influence over the incoming administration’s economic and labor agenda.

“I believe unity within the AFL is important to the degree that we can achieve that and hold it together,” said United Steelworkers President Tom Conway. “We’re at a crucial time here, and we should avoid splitting up over stuff. I understand it happens and people have pretty strong preferences.”

Conway said he won’t go public with his personal preference for the DOL job, and will wait to see what AFL-CIO President Richard Trumka “wants to do.”

Although the AFL-CIO has tremendous clout in Democratic political circles, it doesn’t include three of the five largest unions by membership—the National Education Association, Service Employees International Union, and International Brotherhood of Teamsters. All three have yet to make a labor-secretary endorsement. 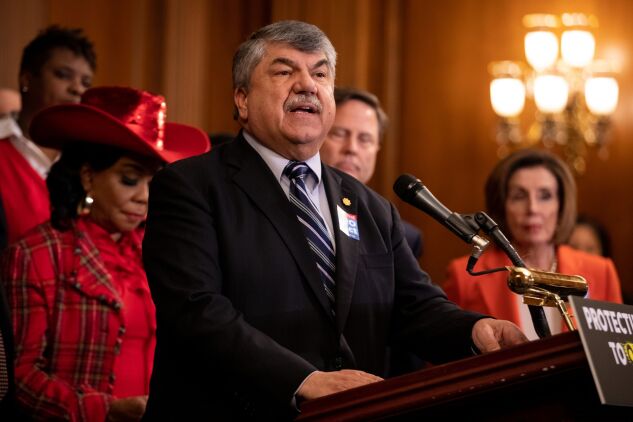 AFL-CIO’s 55 affiliate unions have a limited window to reject or add names to the list, according to the sources, all of whom were granted anonymity because they weren’t authorized to discuss the federation’s internal process.

The sources had slightly differing interpretations of the meeting’s significance and finality. Some described it as a near-final draft that was likely to represent the four names that will be sent to the transition team. Others viewed it as a free-flowing sharing of notes that won’t necessarily be presented to the president-elect. They all said the meeting wasn’t contentious.

Separately, Transport Workers Union President John Samuelsen has said he’s told the AFL-CIO that he supports Sen. (I-Vt.) for labor secretary. Sanders recently said he’d be interested in the job, but his candidacy has yet to gain traction publicly among other unions.

A media representative for the Biden transition didn’t immediately respond to an emailed request for comment. An AFL-CIO representative said: “We continue to solicit input from affiliate unions on key posts and will share those recommendations with the transition on a rolling basis.”

All Hail From Unions

Trumka may opt to make a separate endorsement of his preferred choice.

The AFL-CIO head, who met with Biden and Vice President-elect along with other union leaders on Monday, tried earlier this month to secure union support for endorsing Walsh, labor officials said. Walsh is the only candidate known to have a personal friendship with Biden.

Norcross, elected to Congress in 2014, drew support at the meeting from the International Brotherhood of Electrical Workers, the union from which he hails, two sources said. A former IBEW local business agent and president of the Southern New Jersey AFL-CIO, Norcross has been an active supporter of union rights through his seat on the House Education and Labor Committee.

IBEW President Lonnie Stephenson is on Biden’s transition advisory board.

Harris is serving on the Biden transition’s agency review team for the DOL and has been a vocal TV surrogate for Biden this year.

He was deputy labor secretary in Obama’s first term before helming the agency on an acting basis for less than a year in 2013. Since leaving government, he has served as counsel at management-side law firm Dentons for three years and as a visiting professor at Cornell University’s School of Industrial and Labor Relations. Harris worked as a field representative for the Seafarers International Union early in his career.

Levin, the first-term Michigan congressman and former AFL-CIO assistant director of organizing, already has garnered endorsements from four unions, including the United Auto Workers and Communications Workers of America.

“It’s an honor to have unions I’ve worked with think of me for this role,” Levin said in a statement, adding that he looks forward to fighting for workers in the next Congress.

“While it’s an honor to be mentioned among the many highly qualified individuals being considered for a role in the Biden administration, I am focused on my job as mayor of the city of Boston,” Walsh said.