The pandemic has jump-started efforts to expand California’s unique workplace litigation model beyond its borders, with backers citing employee rights and new state revenue streams, and businesses decrying the increased risk of being sued for alleged labor law violations.

Democratic-led lawmakers in New York, Connecticut, Maine, and New Jersey want to mimic California’s Private Attorneys General Act. The law “deputizes” employees to pursue civil penalties on behalf of the state against their companies for things like failing to pay overtime and provide rest breaks while avoiding mandatory arbitration agreements that would otherwise prevent their claims from going to court.

The claims are relatively easy for workers to file and inexpensive to litigate, and amount to tens of millions annually in passive income for California. The 2004 law also has never been successfully copied in other states, largely because of fierce business opposition.

“The California statute has really for the business community proven such a nightmare that everywhere someone tries to replicate it, it’s going to be fought pretty hard,” said Tim O’Connell, a management-side labor and employment lawyer at Stoel Rives in Seattle.

But this year could be different, in part because of the impact of the Covid-19 pandemic on state coffers and the amount of money available to enforce labor laws, said Myriam Gilles, professor at Cordozo Law School in New York.

“That lack of robust enforcement is going to be felt even more in the post-Covid world,” she said.

Under PAGA, a worker pays just $75 to sue for alleged labor violations, and even that fee can be waived. And while California plays no role in the civil proceedings, the state pockets 75% of any penalties ultimately awarded against companies.

In New York, proponents believe the political willpower exists to push the bill through before the end of the legislative session next month, said Angeles Solis an organizer with the workplace justice team at Make the Road New York, which advocates for the rights of immigrant and working-class communities.

“New York could really follow California’s lead, and do it even better,” Solis said.

With businesses now beginning to reopen, New York’s department of labor needs resources and representative organizations need tools to protect workers, Solis said. “The only way to do that is with this law.”

The bill is in committee in both houses, but faces a tight deadline with the end of the session slated for June 10.

Maine’s version of PAGA faces an uphill battle without the support of Attorney General Aaron Frey (D) who testified against the bill at a public hearing in the Senate Committee on Labor and Housing May 21, said attorney Jeff Young, who sits on the board of the National Employment Lawyers Association.

The proposal would interfere with the attorney general’s ability to ensure litigation is consistent with his position in other cases, Frey told the committee. “My primary concern is that this is privatizing the legal work of the state in this small way.”

Frey’s office spoke to counterparts in California, “and we did not walk away convinced that it was a model that was going to work very well in the end,” he told state lawmakers.

The New Jersey proposal, awaiting committee hearings in the state Assembly and Senate, takes a narrower approach than New York or Maine. It is termed a “fair workweek” measure and would establish employee scheduling rules for large chains of retailers, restaurants, hotels, and warehouse operators, and give workers the right to sue on behalf of the state to enforce those rules.

And the Connecticut proposal won approval in one committee but is stuck in another and likely dead for the 2021 session, said sponsor Sen. Julie Kushner (D), who chairs the Senate’s labor committee.

But the bill will be back next year, said Kushner, adding that it would protect low-wage workers from being coerced to sign arbitration agreements that block their complaints of workplace mistreatment from being litigated in court.

“You have no leverage,” when asked to sign an arbitration agreement before accepting a job offer, “especially if you’re a low-wage worker and there are many other people applying for that same position,” Kushner said. “Workers often sign these without understanding what they mean and without any real option to decline.”

Broad PAGA-like proposals also were considered this year in Oregon and Washington state, and lawmakers in the latter passed their bill through the state House before it got stuck in a Senate committee.

Degree of Separation from PAGA

Proponents of PAGA-like legislation have attempted to address perceived flaws in California’s law, including the lack-of-state-oversight issue.

Several proposals would give state labor agencies more time to intervene in lawsuits.

Under Maine’s proposal the state would have 180 days after a filing notice to decide whether to bring suit, double the amount of time in California, and then another 90 days to step in and take over the litigation.

New York would allow organizations—and not just individuals—to file claims, which could give workers worried about immigration status or who fear retaliation a pathway, said Rachel Deutsch, director of worker justice campaigns at the Center for Popular Democracy, a network of community organizations pushing for racial and economic justice. 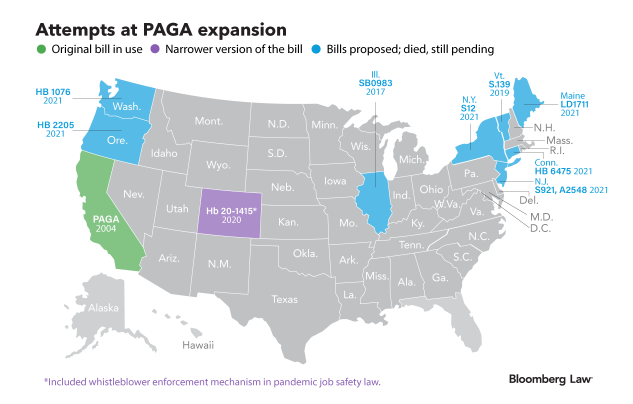 “It’s a sleeper bill that people don’t realize just how dangerous it is,” he said.

In Vermont, the legislature let a PAGA proposal die last year, but established a task force to study worker misclassification issues, including the possibility of a future PAGA-type enforcement option.

Last year, California pocketed more than $100.7 million in PAGA penalties, according to the state’s Labor and Workforce Development Agency. That’s up from $88 million in 2019.

Those funds allowed the state to add 13 staff members devoted to worker misclassification investigations and to launch multilingual campaigns about workers’ rights and wage theft, said a report by the University of California Los Angeles Labor Center.

“There’s a broad evidence-based data set to show that this kind of model works,” said Deutsch, whose group co-authored the UCLA report.

“There’s a major fiscal responsibility component to this mechanism,” she said. “We have to face up to the fact that we don’t have the infrastructure to accomplish the enforcement necessary. We can either increase budgets for departments of labor by ten, or use more creative mechanisms like these bills.”

But California businesses that paid out that $100 million continue to challenge the law, including arguing that the top state court’s precedent against arbitrating PAGA claims conflicts with more recent pro-arbitration U.S. Supreme Court rulings.

The California Business and Industrial Alliance sued the state in 2018 saying PAGA has become “a tool of extortion and abuse” that allows “greedy and unscrupulous plaintiffs’ attorneys to shake down California employers.”

In May, the group asked the Fourth District Court of Appeal to revive a claim that PAGA violates the separation of powers doctrine. The rule puts the executive branch’s prosecutorial powers into the hands of unchecked private plaintiffs, the group says.

Scores of PAGA claims are filed by workers in court every year, and companies including Uber Technologies, Postmates Inc., and Coverall North America have unsuccessfully attempted to force employees to arbitrate.

Despite the potential take-home for states from civil penalties and significant activism from labor organizers, many state proposals have faced strong headwinds.

Some legislators are worried the U.S. Supreme Court would strike down state statutes that avoid arbitration, finding them to be preempted by the Federal Arbitration Act, said Gilles of Cardozo Law.

And businesses have strongly opposed the plans.

“In Oregon, Nike was against the bill,” Gilles said. “I feel like that’s the death of this bill.”

, which is headquartered in Oregon, directed Bloomberg Law’s request for comment to the Oregon Business and Industry Group, which testified against Oregon’s PAGA bill.

“California has shown great success in growing an industry of attorneys who pursue and defend against PAGA claims,” the group said. “Employers and employees, though, pay the price.”

And while states should eventually see financial returns from PAGA bills, there could be upfront implementation costs including hiring staff, which is part of what blocked the Washington bill, Gilles said.

“We face an enforcement crisis in this country that has broad implications not only for workers, but for companies that comply with the rules, and for the public,” said David Seligman, executive director of Towards Justice, a nonprofit workers rights law firm in Denver.

In Colorado, the spread of Covid-19 last year in the workplace bolstered support for the bill and the qui tam provision, which crossed political parties, Seligman said.