Denver officials are considering a minimum wage increase for the first time in 20 years—not because there’s been no appetite for it but because state law prevented it until now.

A new Colorado law effective in August lets cities and counties set minimum wage requirements higher than the state minimum, which is $11.10 per hour. The Denver mayor’s plan, if approved, would gradually raise the city’s wage floor to more than $15.

Colorado was one of the earliest of 26 states adopting laws to preempt local minimum wage ordinances. Colorado’s preemption had been on the books since 1999, whereas most of those other states adopted preemption laws in the 2010s.

The change in Colorado is a rare one amid the trend of ever-widening state preemptions. States block a variety of local employment mandates that go beyond minimum wage—including paid leave, prevailing wage, and gig economy regulations. And new proposals surface across the country each year, including some that would expand preemptions to cover employee scheduling and LGBT-inclusive nondiscrimination ordinances. Such ordinances tend to be more common in traditionally Republican-led states. 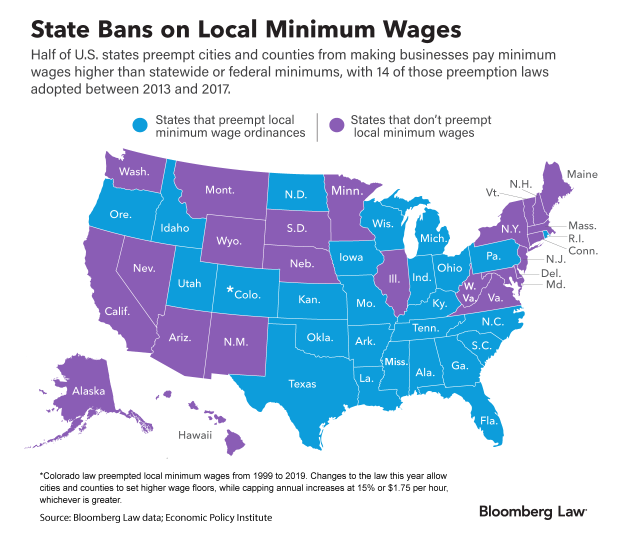 “Colorado is one of the success stories from the last cycle,” said Laura Huizar, senior staff attorney with the National Employment Law Project, which advocates for pro-worker policies such as higher minimum wages. “It’s an uphill fight, but it is encouraging for advocates to see” that preemption laws can be reversed.

That’s not to say there isn’t momentum on the other side of the issue. In the same year that Colorado gave local governments authority to set wage floors, North Dakota took away that power. The new Colorado law still partially restricts local authority, limiting annual increases to 15% or $1.75 per hour, whichever is greater.

While Huizar and her allies advocate for minimum wages that ensure workers can support themselves and their families, pro-business and free-market advocacy groups such as the American Legislative Exchange Council tend to argue higher minimum wages—and local minimum wages, in particular—are bad for economic growth and can lead to fewer jobs.

“When the locality engages in raising the minimum wage, you create a patchwork” of regulation that’s difficult for businesses that operate across the state, said Jon Russell, national director of the American City County Exchange, an affiliate of ALEC.

The wave of states blocking local minimum wages has slowed, perhaps because most Republican-led states already have done it. North Dakota adopted the only new wage preemption law this year, and none were adopted in 2018. This comes after a surge of minimum wage preemption laws adopted in 14 states between 2013 and 2017, according to the Economic Policy Institute. Huizar said this surge came as a conservative backlash to the growing Fight for $15 movement.

But the recent shortage of minimum wage preemption laws doesn’t mean there’s any slowdown in proposals targeting a wide range of other employment policies, Huizar said.

In 2019, advocates such as Huizar’s group along with city and county associations defeated a number of other proposals, including legislation in Florida and Texas that would have broadened the existing preemptions of employment-related mandates.

“What you saw in Florida was local officials, both Republican and Democrat, stand up and say, ‘Enough is enough,’” said Brooks Rainwater, who heads the National League of Cities’ Center for City Solutions.

Like in Texas, concerns that the Florida bill would hurt local protections against LGBT discrimination contributed to the legislation’s failure. Florida doesn’t have a statewide nondiscrimination law covering sexual orientation and gender identity, but a number of Florida cities and counties have ordinances that do protect those categories.

Similar concerns played a part in Pennsylvania, where the legislature in 2018 rejected a bill to preempt local paid leave requirements but opponents feared the broad language of the bill would affect nondiscrimination ordinances, too.

In Tennessee, which already preempts local nondiscrimination ordinances as well as wage and benefit mandates, the House passed a bill in 2019 to go a step further. It would’ve blocked local governments from using economic development incentives—along with other grants and tax breaks—to reward wages, benefits, or nondiscrimination policies that go beyond state law. The Senate postponed the bill for further study. LGBT rights advocates dubbed it a “license to discriminate” bill.

“The preemption bills that target LGBT anti-discrimination ordinances certainly face a lot of controversy and have spurred more grassroots advocacy and organizing,” Huizar said. But beyond that, the sweep of state preemption laws is so broad that “advocates are coming together across issues to defend local authority.”

Florida, Pennsylvania, and Texas all have seen their preemption battles land in court as well, as cities, state officials, and business groups dispute which kinds of local ordinances are and aren’t allowed. Likewise for Alabama, a federal lawsuit by the NAACP and others claims the state legislature was racially motivated when it preempted local minimum wage ordinances in 2016, including one that had just been enacted in Birmingham, where a majority of the population is African American.

Oregon in 2017 and then Illinois and New Mexico in 2019 banned local “right to work” ordinances—laws that would prevent employment agreements requiring all of a company’s employees to be dues-paying union members.

Although state legislators of all political stripes like to talk about local control as a principle, the decision to preempt or not on any given issue depends more on the politics of that issue, Russell said.

“The state preemption is not just a red issue, it’s also blue, in terms of being a partisan issue versus policy,” he said.

Advocates on both sides will keep watching the state legislative proposals into the 2020 election year—both those that expand preemptions and those that propose to undo them.

Minnesota and Maryland see perennial proposals to preempt local minimum wages but so far haven’t enacted them, Huizar said. When Maryland enacted a statewide plan this year to gradually increase its minimum wage to $15 an hour, advocates fought against behind-the-scenes rumors that a local preemption might get slipped into that legislation, she added.

On the other end, Louisiana “is absolutely one to flag” as a state that could follow Colorado’s lead in giving cities and counties back the power to set local wage floors, she said. Advocates have an active, well-organized campaign around the issue in Louisiana, she said. A report Huizar co-authored in July noted Louisiana was one of at least 11 states where bills were introduced in 2019 to repeal the minimum wage preemption. The state also has a Democratic governor.

Russell, on the other hand, is watching for cities and counties to pursue more free-market approaches. His group has heard interest from local governments in Ohio and Pennsylvania that are considering local “right to work” ordinances.

Already filed for the Sunshine State’s 2020 session, H.B. 305 would broaden the state’s preemption of local employment regulations, similar to the failed 2019 proposal.

At the same time, a proposed ballot initiative could give voters the chance in 2020 to raise the minimum wage statewide.

“It being a big election year, there could be hot-button issues that come up and create the dynamics” for additional employment-law preemption proposals, he said.