House Democrats quietly included a tax-sweetener for organized labor in their multi-trillion budget reconciliation proposal, allowing union members to write off a chunk of annual union dues on their tax bill.

But another element is provoking conservatives: The provision would exclude workers who voluntarily quit their union but still must pay a smaller sum, in what are known as agency fees, to help cover the costs of collective bargaining.

Twenty-seven states have “right-to-work” laws on the books that allow workers to opt out of union dues, which the union may also use for political donations and other causes not directly linked to the bargaining unit. But unionized private-sector workers in the other 23 states can still be required to pay agency fees, which have increasingly become a point of political friction in recent years.

The proposal, approved by the Ways and Means Committee this week, would only allow for deductions of “union dues” up to $250 per year, per person. But the legislative text doesn’t mention any deduction of agency fees, suggesting that the credit would only apply to full members who support unions’ political priorities.

Conservative groups see it as a subsidy for political activity.

“This is quite simply discriminating against workers who don’t want to pay for union politics,” said F. Vincent Vernuccio, a former U.S. Labor Department official in the George W. Bush administration who is now president of the conservative Institute for the American Worker.

While the proposal drew fire from conservative and anti-union groups, its inclusion in the Ways and Means Committee’s reconciliation bill was overshadowed by other elements of the legislation, especially language that would raise the top corporate tax rate. 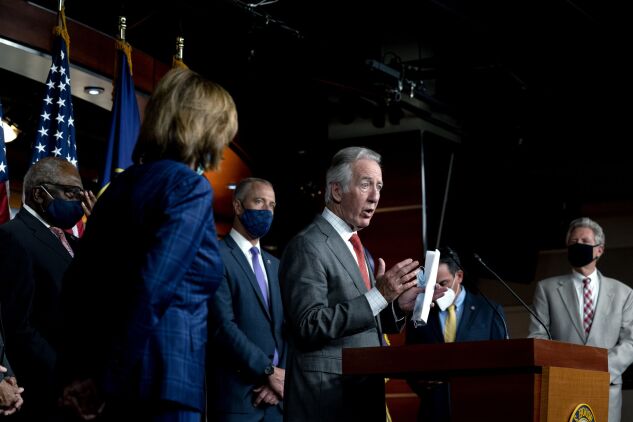 The panel’s measure is part of a $3.5 trillion package that is central to President ‘s economic and social policy agenda. The reconciliation package, which can pass with only Democratic votes, is the subject of intense discussion in both chambers, and numerous political hurdles—including the overall price tag—still must be cleared before final votes can be held.

Spokespeople for Rep. , a Massachusetts Democrat who chairs the Ways and Means Committee, didn’t respond to emails and calls seeking comment. In his opening statement when the panel took up the bill earlier this week, Neal said the variety of tax credits in the measure would strengthen the working class.

“When combined, the whole of these credits is greater than the sum of their parts,” Neal said. “This proposal ensures that every tax tool we have to benefit community members—and create good jobs—will work together more effectively across our entire country.”

Republicans on the committee put forth an amendment to remove the union dues language from the bill, but it failed on a party-line vote.

The broader spending package includes changes to federal labor law that would give the National Labor Relations Board authority to collect punitive fines from employers that violate workers’ union rights. It also would create penalties for businesses that violate overtime and child labor laws.

The fate of Democrats’ labor-focused reconciliation proposals rests largely in the hands of the Senate parliamentarian, who will evaluate their relevance to the budget bill. On Sept. 19, the parliamentarian ruled that Democrats’ immigration reform proposal didn’t meet the criteria for inclusion in the bill—and opponents hope the tax provisions suffer the same fate.

“Surely the dues paid by union members and the agency fees paid by non-members should be treated the same,” said Alan Viard, a senior tax policy fellow with the right-leaning American Enterprise Institute. “It’s obviously a major policy flaw to discriminate against union non-members.”

Workers were able to write off union dues on their taxes before 2017, when that benefit was frozen under the Republican-backed tax law. Under the old system, taxpayers who itemized their deductions instead of taking the standard deduction could list their union dues as part of their total out-of-pocket work expenses.

The new proposal would allow taxpayers to claim a $250 credit for union dues as an “above the line” deduction, meaning that people who take the standard deduction would also be eligible. Because most union dues amount to a few hundred dollars a year, the proposal would essentially deliver a partial refund of the dues most union workers pay.

The text of the bill makes it clear the benefit wouldn’t apply to workers who have agency fees deducted from their paychecks, Vernuccio said, because it stipulates that claimants must have “remained a member” of a union through the end of the taxable year.

The Labor Department’s Bureau of Labor Statistics defines a union member as someone actively affiliated with a labor organization—usually a person paying dues, though the bureau didn’t specifically ask that question in its annual survey of organized labor. Its methodology also features a wider category of workers “represented by unions” that includes non-members who are nevertheless covered by a collective bargaining agreement.

Mandatory union fees have become a pressure point in recent years in the struggle between organized labor and anti-union groups. The Supreme Court in 2018 stuck down mandatory union fees for public workers in the landmark Janus v. AFSCME decision. The conservative majority said the fees violated workers’ First Amendment rights, as union advocacy in the public sector is inherently political.

Since then, conservative groups have waged legal battles to force unions to refund agency fees. While those efforts have been unsuccessful, the dues measure in the reconciliation bill could become another area of legal contention.

(Updated with details on other labor provisions, in paragraphs 12, 13. Sept. 17 story previously corrected in paragraphs 2, 3 to show the bill would exclude workers in states without "Right-to-Work" laws who quit their union but still pay agency fees.)