Carolyn O’Boyle, managing director of Deloitte Talent, noticed in 2016 that turnover for employees was significantly higher in the year following a family-related leave. With a workforce spanning four generations, workers at the consulting firm increasingly were facing challenges supporting the well-being of their families, and those challenges manifested in the workplace as higher turnover, lost productivity, and disengaged employees.

That year, decided to expand its paid family leave program to better reflect the scope of caregiving needed in families, O’Boyle, who also is chief operating officer of the talent strategy and innovation team, told Bloomberg Law via email. All employees can now take up to 16 weeks for the arrival of a new child or to care for a spouse, parent, child, or sibling with a serious health condition.

“In the professional services industry, people are your greatest asset,” O’Boyle said. “Ultimately, if our people are able to integrate their caregiving needs with their professional life they would be more productive and we would be more successful, creating the win-win we were looking for.”

Deloitte isn’t the only major professional services firm making a calculation for paid family leave. also expanded its leave program in 2016 to 16 weeks of paid time off, and in April this year, revamped its offerings—now workers can take eight weeks of paid leave and have four weeks of transition time, meaning they work 60 percent of their schedule at full pay after leave is over. The moves may be employee-friendly, but they’re also part of a benefits strategy that keeps large employers in the mix for attracting and retaining top talent.

The vast majority (92 percent) of workers report that paid leave is important to their overall job satisfaction, according to a 2017 survey from the Society for Human Resource Management. Perhaps even more notable for employers warring for new hires, 29 percent of employees cite their overall benefits package as a top reason to look for a position outside of their current organization in the next 12 months, SHRM found. 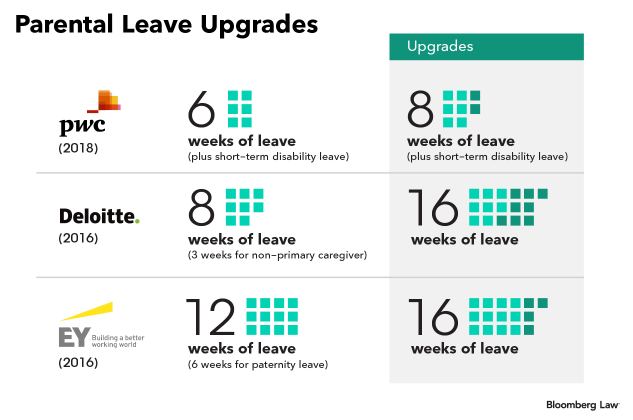 Deloitte’s investment in family-friendly leave is paying off two years later. More than 5,000 workers have used the family leave benefit in the past two years. Participation rates across genders for family leave have remained relatively stable since the program was introduced, “suggesting that there are a stable group of employees facing these challenges at any point and allowing us to more effectively plan and manage our workforce,” O’Boyle said.

The firm also has seen an increase in participation for male employees in particular, both in terms of number of workers using the leave and an increase in the duration of leave, O’Boyle said.

Ernst & Young has noticed a similar uptick in male employee use of parental leave since the company’s benefits expansion, Karyn Twaronite, EY global diversity and inclusiveness officer, told Bloomberg Law in an email. After implementing the new policy, the average number of days taken off by men at EY increased from 15 to almost 40, and this year nearly 200 fathers will take the full 16 weeks, twice as many as in 2017, Twaronite said. More than 56 percent of male employees are taking three weeks or more of family leave, she added.

Although PwC’s expanded leave is new this year, when the company increased paid paternity leave in 2015, 40 percent of eligible dads took six weeks of leave, and in 2016 that number jumped to 72 percent, Jennifer Allyn, diversity strategy leader at PwC, told Bloomberg Law.

Strategizing for the Future

In the years since the expanded leaves were in place, all three companies have pinpointed areas to improve and how to strategize going forward.

Deloitte found that offering the program and benefits was certainly “one step in the right direction,” O’Boyle said, but without a corporate culture in place to support use of the leave, those benefits can go unused. “Leadership at all levels need to be engaged in encouraging professionals to take advantage of these benefits and create a culture that supports its people and their families,” she said.

More employees taking advantage of family leave at PwC has presented its own obstacle, Allyn said. About 2,000 people go on parental leave each year at the company out of about 71,000 in the U.S., “and that affects a lot of people” and can disrupt work temporarily.

EY has found that improving its parental leave policy is building “a more sustainable pipeline of talent,” Twaronite said. Providing parental leave policies for mothers and fathers also is increasing female leadership across organizations, she said. EY will continue to target the father piece of that equation, encouraging dads to take more leave, Twaronite added.