Then President-elect Joe Biden put on a mask after he spoke on November job numbers at the Queen theater in Wilmington, Delaware on Dec. 4, 2020.
Photo by Alex Wong/Getty Images

Workers who refuse a job they consider unsafe might have an easier time getting unemployment benefits under a Biden administration proposal, but big questions remain around the policy’s specifics and how states will apply it.

President instructed the U.S. Labor Department to consider issuing guidance to clarify that “workers have a federally guaranteed right to refuse employment that will jeopardize their health” while still qualifying for unemployment benefits. The White House announced the policy Jan. 22 as one of many federal agency actions springing from an executive order aimed at economic relief during the Covid-19 pandemic.

A lot depends on the level of detail in any guidance memo the Labor Department might publish. The federal agency might end up largely reiterating the flexibility that it spelled out for states in guidance issued last March or it could become more prescriptive in pushing states to err on the side of granting benefits for people with workplace safety concerns specific to the virus.

The policy goal seems to be creating a national standard of what’s considered a safe or unsafe workplace, for purposes of unemployment benefits eligibility, said Isabel Soto, director of labor market policy at the center-right think tank American Action Forum.

“The problem is it’s trying to do that on top of a whole patchwork of standards at the state level,” as some states set their own workplace safety standards and others rely on federal rules, she said. “It might just be muddying the waters.”

This latest unemployment policy action from Biden joins an earlier proposal that he announced as part of his $1.9 trillion Covid-19 relief package. In that plan, he proposed increasing the federal unemployment bonus payments to $400 per week and extending them through September. Unemployment claimants are currently getting a $300 per week federal payment, which comes on top of traditional state benefits. That supplement is due to expire in March.

Employers and workers continue to navigate business closures and restrictions that vary widely by city and state in response to the pandemic. The latest federal unemployment data showed new claims for jobless benefits remained higher than typical at about 900,000 for the week ending Jan. 16, although they declined slightly from the previous week.

Biden’s proposal aims to “help ensure that unemployed Americans no longer have to choose between paying their bills and keeping themselves and their families safe from COVID-19,” according to a White House fact sheet.

The Labor Department “is developing an Unemployment Insurance Program Letter (UIPL) to provide guidance to state workforce systems in response to the order and will provide additional information when it is complete,” a department spokesperson said, without responding to a question about the timeline for releasing the letter. 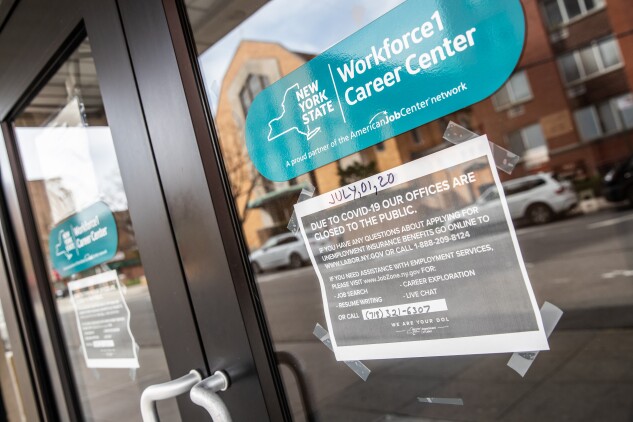 “What I’m looking for the Labor Department to do is to cover some of the common scenarios,” said Andrew Stettner, an unemployment policy analyst at left-leaning think tank The Century Foundation.

In particular, workers would benefit from guidance that allows them to refuse work if the employer isn’t following safety protocols prescribed by the Centers for Disease Control and Prevention or by a new workplace safety standard expected to be published by the federal Occupational Safety and Health Administration, he said.

“You’re going to have to have a good reason for feeling unsafe,” not just a general fear of the virus, he said. Examples of potentially acceptable reasons include being immunocompromised or being over 65 and not yet vaccinated, he added.

The concept of a right to refuse work that’s not “suitable” isn’t new in unemployment policy, but it gets complicated by the pandemic, said Doug Holmes, a former state unemployment director in Ohio who now lobbies on behalf of employers.

“The question becomes how do you really evaluate whether a job is safe or not,” he said. “I would say in most cases a generalized fear of Covid would not be connected to the work. But if there’s something specific to the work that’s being offered that puts someone at unusual risk or unreasonable risk, states would consider that as a reason to refuse work.”

A push toward granting jobless benefits more leniently for people who quit or refuse to return to their jobs sounds good in theory in terms of public health, but could add another burden to already-strained employers, especially small businesses, Soto said. It also comes on top of other Biden proposals that would hit businesses hard if enacted, such as a $15 minimum wage nationwide, she added.

“Suddenly you’re facing the prospect of losing who knows how many employees depending on the shape this change in policy takes,” she said. “You could potentially offer some kind of pay bump, but it’s going to be difficult to compete with an unemployment system that has this federal bump on top of it.”

The frequency of workers attempting to claim benefits because of an unsafe or unsuitable workplace is not very high, though, Holmes said.

“The number of claims that turn on this issue is really small, compared to the huge number of people being paid,” he said.

The net result of Biden’s proposal for workers and employers also could vary substantially from state to state—with some taking a more generous approach toward approving benefits and others being stricter about what counts as a good reason to refuse work.

Minnesota, for example, issued guidelines for safe business reopening protocols last year and told workers they could refuse to return to work and claim unemployment benefits if their employer didn’t follow the guidelines, Stettner said.

“There have been some states that have put out guidance, but it’s been very patchwork,” he said.

Texas also issued guidance last year that provided workers a list of criteria under which they might qualify for benefits if they chose to quit or not return to their jobs—while noting such claims are evaluated on a case-by-case basis.

The criteria include people age 65 or older or those having underlying medical problems, people with at-risk household members, and parents whose child-care centers are closed. The state’s special criteria for traditional unemployment benefits are similar to special eligibility rules for the federally funded Pandemic Unemployment Assistance, which covers independent contractors, self-employed people, and others who don’t qualify for traditional unemployment.

“We are, of course, still waiting for DOL guidelines,” Bernsen said.