An activist holds a copy of the U.S. Constitution during a news conference calling for ratification of the Equal Rights Amendment on April 30, 2019 in Washington, D.C.
Photographer: Alex Wong/Getty Images

Federal appellate judges voiced doubts about their authority to order the Equal Rights Amendment published as part of the US Constitution, as they heard arguments Wednesday in a case designed to recognize the ERA as the 28th Amendment.

The Illinois and Nevada attorneys general, both Democrats, are asking the US Court of Appeals for the District of Columbia to revive their lawsuit seeking to force the US archivist to publish and certify the ERA. They contend it is fully ratified since the Nevada, Illinois, and Virginia legislatures gave it the final three votes needed in 2017, 2018, and 2020.

The federal district court in D.C. dismissed their case last year, finding they lacked standing and also that the 1979 deadline Congress set for three-fourths of states to ratify the amendment was legally binding, making those final state votes four decades too late.

The request for a court order instructing the archivist to publish runs into a high legal hurdle that courts must clear before granting mandamus relief, Judge Robert L. Wilkins said while questioning Illinois and Nevada’s position.

“Even if I think your argument has some force, in order for us to grant mandamus it has to be clear and indisputed,” Wilkins said. He said that isn’t the case because court precedent indicates Congress does have authority to put deadlines on an amendment ratification.

The previous archivist, David Ferriero, declined to publish the amendment because of a 2020 Justice Department memo finding the congressional deadline to be valid.

A Senate committee Wednesday deadlocked on a vote to advance the confirmation of Colleen Shogan, the nominee to replace Ferriero as archivist. This means an extra procedural vote is now needed to get her confirmation out of committee and onto the Senate floor.

“The Equal Rights Amendment would provide a clear, explicit guarantee of equal rights for women and would provide clear judicial standards for cases involving discrimination,” Nevada Attorney General Aaron D. Ford (D) said by phone Tuesday, in advance of the court hearing. “And it’s insurance against future actions that would take us backwards.”

If the D.C. Circuit upholds the district court’s dismissal of Illinois and Nevada’s case, it would be the second federal appeals court loss for ERA supporters in as many years. The First Circuit in June 2021 affirmed dismissal of a lawsuit brought by advocacy group Equal Means Equal for lack of standing. The plaintiffs in that case also were seeking a court order to force the archivist to publish the amendment as part of the Constitution. 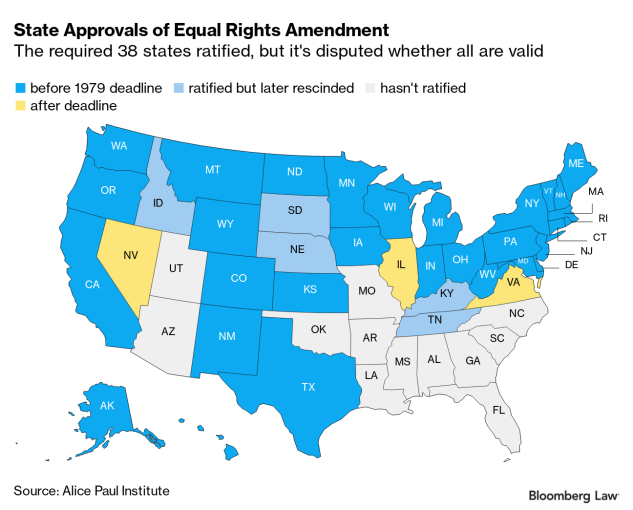 The three judges at the D.C. Circuit hearing also questioned whether Illinois and Nevada had shown they suffered an injury from the archivist’s refusal to publish the ERA and that the court could remedy that injury with the relief requested—key requirements for showing the states have legal standing to sue the archivist.

“The standing issue here is quite tricky,” said Judge particularly because both sides of the case agreed the archivist’s publication doesn’t determine whether the ERA’s ratification is legally valid.

“It has no legal effect on whether the amendment has been ratified, but it may have some other legal effect,” Rao said.

Jane Elinor Notz, the Illinois solicitor general who argued the case for the states, said equating constitutional validity with legal effect takes too narrow a view of injury.

“That is a cognizable injury, and it is redressable by a court order directing the archivist to publish and certify,” Notz said.

Judge questioned whether an archivist has any discretion, since federal law mandates they publish amendments after receiving ratification notices from three-fourths of states.

“You’re suggesting that an archivist who has a ministerial duty, albeit mandatory, can go through this process for his own legal judgment,” to decide whether the ratifications are valid, Childs said to Sarah E. Harrington, the Justice Department attorney arguing on behalf of the archivist.

The archivist in this instance, previously Ferriero, sought advice from his lawyers at the Justice Department’s Office of Legal Counsel, Harrington said. She argued the lower court got it right in determining the states have no standing to sue the archivist because publication wouldn’t fix a legal injury they perceive as a result of the ERA not being fully recognized.

“The ratification either happened when Virginia ratified or it didn’t happen, and there’s nothing that any federal official can do that will change that,” she said. Harrington argued some other case—perhaps in which a woman sues a state over a discriminatory law and asks the court to enforce the ERA’s constitutional protections—would be a better vehicle for courts deciding the validity of the amendment’s ratification.

ERA supporters have slammed the Justice Department under President Joe Biden for opposing the litigation to get the amendment recognized, just as the department did under President Donald Trump.

Harrington said in court that Biden supports the principles of the ERA, but the Justice Department views this case as legally deficient. She urged the court to affirm dismissal of the case on standing without resolving the question of whether Congress has authority to set time limits on proposed amendments.

“We don’t think this is the right case for the court to decide these questions if it doesn’t need to,” she said.

To contact the editor responsible for this story: at mmuellerneff@bloomberglaw.com; Rebekah Mintzer at rmintzer@bloombergindustry.com