New York Gov. , slammed with state investigative findings that say he sexually harassed multiple women, became the latest powerful figure years after the launch of the #MeToo movement to give face to the persistent toxic culture that creates barriers for victims of hostile workplaces.

The allegations against Cuomo come as recent high-profile lawsuits point to entrenched harassment and discrimination, including in shareholder cases against , the parent company of Victoria’s Secret, that settled in late July; a California agency’s complaint accusing of a “frat-boy” culture; and sexual assault litigation against an ex-Tinder executive that’s slated for oral argument this week at a federal appeals courts.

Despite some advancements from #MeToo activism, legal and political obstacles remain for victims to come forward with harassment claims, and structural changes in the legal system and at companies still need to happen to eradicate these patterns, academics and attorneys said. This is particularly true for vulnerable workers in the restaurant, agriculture, and other industries dominated by low-income employees, they added.

Meanwhile, corporations are looking inward and investing in ways to adjust culture, as employees and shareholders increasingly demand better practices to eliminate harassment and discrimination.

“We’re at the beginning of what institutional accountability might look like,” said Justine Andronici, a Pennsylvania-based attorney who represents victims of sexual harassment. “The #MeToo movement has been one of awareness. It led to the downfall of some powerful men, but until we see how sexual harassers are able to leverage systems of power to enable them, we won’t be able to eradicate it.”

Barriers remain steep for those fighting harassment and discrimination, thanks to gaps in legal protections, high thresholds to prove claims in court, and contracts that can shroud patterns of misconduct, including non-disclosure agreements, non-disparagement agreements, and forced arbitration pacts.

Title VII of the 1964 Civil Rights Act—which prohibits workplace bias based on sex—only covers businesses with more than 15 employees, and leaves out a lot of people, including independent contractors, said Carrie Baker, a women and gender studies professor at Smith College. Courts also have made it harder to bring lawsuits based on alleged harassment by certain lower-level supervisors.

Retaliation remains common, as well, and women who come forward have to fear backlash from current as well as future employers. Some industries have ingrained norms that exacerbate worker harassment. Restaurant workers, for example, can be forced to endure customer harassment for tips that supplement the sub-minimum wage that’s allowed for the industry—an issue that state and federal lawmakers have sought to address.

Arbitration agreements, common across sectors, also can prevent individual workers from bringing their cases forward. A former Tinder executive on Aug. 12 will argue that her sexual assault and retaliation claims against the company’s former CEO should be heard in court rather than private arbitration. The case before the U.S. Court of Appeals for the Ninth Circuit in San Francisco highlights the way that forced arbitration can shield predators from accountability, advocates say.

“Social change is slow,” Baker said. “The workplace is still White-male dominated and there are hierarchies in place that let men do whatever they want. It’s a deep problem, not an easy one to fix. #MeToo is a shot in the arm, but that doesn’t mean the fight was over.” 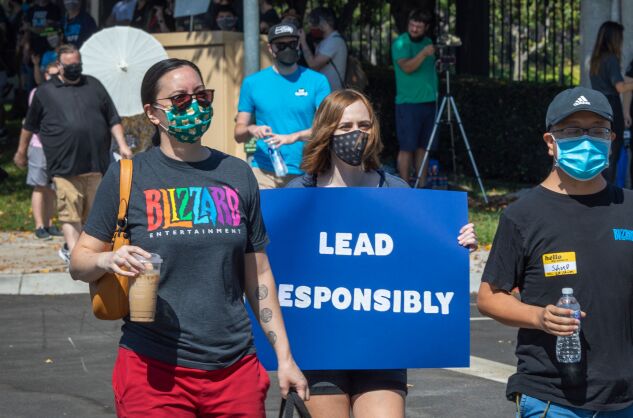 Employees of Activision Blizzard hold a walkout and protest rally to denounce the video game company’s response to a California Department of Fair Employment and Housing lawsuit and to call for changes in conditions for women and other marginalized groups, in Irvine, Calif., on July 28.
Photo by DAVID MCNEW/AFP via Getty Images

New York Attorney General Letitia James’ report on the alleged conduct of Cuomo as governor highlights the story of 11 victims and describes the patterns that protected the governor. Cuomo has denied the findings.

The report could be modeled by workplaces in the public and private spheres, Andronici said. She said what happened in New York still happens in workplaces around the world.

Civil rights group urged in an open letter that Cuomo resign and for New York state leaders to remove him from office for allegedly violating state and federal laws.

“If Andrew Cuomo resigns tomorrow, that is not accountability that will help women,” she said, instead suggesting bolstering laws to protect victims, encouraging independent investigations, and establishing clear reporting mechanisms. “Getting rid of one harasser is damage control.”

While it may be hard for an individual victim to come forward, shareholder lawsuits targeting workplace harassment increasingly have led to changes at companies. L Brands agreed to spend $90 million on changes to corporate practices, including eliminating non-disclosure agreements. This followed a $310 million settlement with board of directors and another $90 million settlement with . Another similar case is ongoing against Pinterest Inc.

“As shareholders got more involved, companies chose to make sure they were in compliance with Title VII,” said Julie Goldsmith Reiser, a partner with Cohen Milstein Sellers & Toll PLLC, who has led many of the shareholder suits against companies. “From the date that #MeToo hit, it has turned instead into, ‘What is a toxic culture?’”

She said the #MeToo movement has taken longer to seep into the public sector, and many scandals there didn’t have an impact, including those involving former President .

“Many victims fear not being believed or the other side denying it, or saying that she shouldn’t have put herself in that position: Your dress was too short, you drank too much,” she said. “There are societal checks preventing people from comfortably coming forward.”

Before the #MeToo movement, companies had eschewed including sexual misconduct-related termination clauses in their executive contracts, making it difficult to send a CEO packing without a generous pre-negotiated payout for failure to prove cause.

That’s changing. Since the initial #MeToo wave in 2018, companies have started to add clauses about sexual harassment or violation of company policies as for-cause justification for terminating a CEO without severance, said Rachel Arnow-Richman, a labor and employment law professor at the University of Florida Levin College of Law.

“The lack of sexual misconduct-related termination clauses can put companies between a rock and a hard place between shareholder derivative suits and possible CEO lawsuits claiming unlawful termination without compensation,” she said.

A recent study Arnow-Richman co-authored found that since 2018, more companies are adding sexual harassment or violation of company policy or code of conduct as for-cause termination clauses to contracts, even while other terms stay the same.

That means sexual misconduct termination clauses could become more commonplace in the future, she said.

“We want to see the terms of exit reflect CEO accountability for sex-based misconduct as opposed to the cushioned exits of the past,” said Arnow-Richman.

Dozens of states have passed or proposed laws aimed at tamping down on harassment in the workplace, including adopting new trainings and addressing how to evaluate employee complaints. Their effectiveness remains to be seen.

Cuomo himself signed a 2019 New York law that made it easier for workers to prove sexual harassment allegations by eliminating a requirement that said the harassment must be “severe or pervasive.” That higher standard is still in place for claims under federal anti-discrimination laws.

New York is also one of several states that attempted to ban mandatory arbitration for harassment claims, but many of those measures have been preempted by federal law. A federal judge struck down a similar law in California; its fate is pending before the Ninth Circuit.

There is a need for federal reform, said Lisalyn R. Jacobs, CEO of Just Solutions, who pushes for federal policy changes to address violence against women and harassment.

Many efforts have stalled or face uncertain futures before Congress, including an effort to strengthen anti-discrimination law.

“Every workplace should have clarity that harassment is unacceptable and know exactly what the consequences will be,” Jacobs said. “We need more clarity and to strengthen federal law.”