Inflation in the Covid-19 economy is costing American retirement savers future purchasing power, forcing employers to reconsider the benefits they offer amid an unprecedented shift in worker retention.

Consumer Price Index data for July has produced a number of eye-popping projections for 2022, including a 6.2% Social Security cost-of-living adjustment and increased limits for retirement plan contributions equivalent to nearly three years worth of ordinary gains.

Meanwhile, a record number of businesses are considering making changes to their health and welfare benefits packages, according to a recent survey. Employers are eyeing increased matching contributions, salary hikes, and even putting their retirement plans on auto pilot to help keep their workers’ savings on track.

Although recruitment and retention is a primary driver, with future dollars expected to dwindle, businesses can take a big weight off their workers’ shoulders by restructuring retirement packages to ensure they get the most out of the money they save.

“This is a sign that employees need to take a step back and take a look at their current budgeting,” said Katie Hockenmaier, director of U.S. defined-contribution research for Mercer, an investment management subsidiary of global professional services firm “Prices probably aren’t going to go down in the future, so they need to consider how much they’re saving for retirement now.”

Companies could consider increasing their company match or helping wary employees to save more by putting in place automatic escalation or auto-enrollment, Hockenmaier said. Some employers have even begun to tie their match formulas to the yearly increases the Internal Revenue Service sets for minimum retirement contributions. 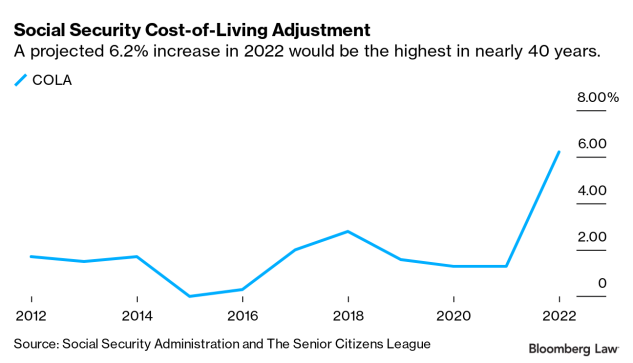 It’s always been true that the dollars Americans save now won’t go as far when they’re cashed in as retirement income years or even decades into the future, but the pandemic-fueled economic downturn widened that gap more than ever, Hockenmaier said.

The cost-of-living adjustment for Social Security income earners is one of the most glaring signals of inflation. It acts as a harbinger for inflation that can be whittled down to a dollar-by-dollar increase or decrease every year, said Mary Johnson, a policy analyst at The Senior Citizens League.

That’s why other federal programs like food stamps or railroad worker retirement benefits use Social Security numbers when calculating their own annual benefits changes. Even the private sector sometimes centers base wage hikes on how much more money Social Security recipients will receive.

But Johnson said she tries to get ahead of the Bureau of Labor Statistics each year by using a statistical analysis tool she built to fill in missing consumer price indices using only one or two months of true data. Based on the July CPI alone, she said, Social Security recipients could expect a 6.2% raise, compared with a five-year average of about 1.3%.

“The COLA is something I’ve been researching for about 26 years, but this is the highest estimate that I’ve ever produced,” Johnson said. “It would be the highest COLA in 40 years.”

Bad News for the Rest

A big increase in monthly Social Security benefits is good news for retirees who use that money as their primary or supplemental income, but it can have an opposite effect on people saving up for or nearing retirement. If her predictions stay true, older workers who were considering retiring in 2022 may want to do so this year to take advantage of the raise.

Younger employees should reevaluate how much of their monthly income they’re stashing away for retirement, she said, because the costs of goods and services rarely go backward, so 2022 could likely mean a big jump in costs that they should plan for now.

“There are a lot of different things competing for financial assets right now,” said Hockenmaier.

Mercer has already projected a 5.1% hike in how much of their salary wage earners will be able to defer into qualified 401(k), 403(b), and 457 retirement plans next year, compared with no change last year, and a 2.6% increase the year before. Mercer is projecting record increases in almost all minimum contribution limits to U.S. retirement plans except catch-up contributions for older savers, which were already subject to big increases under legislation Congress passed in 2019.

That said, inflation brought on by a global health pandemic isn’t likely to send the economy into overdrive forever, said Brian Dress, a researcher and investment adviser at Left Brain Wealth Management in Chicago. So, savers shouldn’t necessarily overhaul their investment portfolios because of one bad year.

“We’re facing temporary issues right now, and a lot of them are just supply chain-related,” Dress said. “There’s a rush to invest in commodities like metals, mining and oil, but we’re recommending that people just stick with companies that have pricing power.”