A scrap metal worker in Maryland quarantined himself for three weeks after being hospitalized with Covid-19. A New Jersey janitor experienced a sore throat and weakness after he was exposed to the virus on the job, and stayed home waiting for his test results. A legal assistant asked to telework when her son’s Florida school closed in the pandemic.

They all say they were illegally fired, joining six dozen other workers who have sued their employers over alleged violations of the Families First Coronavirus Response Act, according to a Bloomberg Law analysis. The Kroger Co., Eastern Airlines LLC, and Holiday Inn Club Vacations Inc. are among the companies that faced lawsuits under the first U.S. federal paid leave law, which took effect April 1 and aimed to create leave options for workers as the coronavirus spread.

Business groups and management attorneys warned in the spring that the legislation was hastily crafted and left companies vulnerable to a groundswell of litigation, including class or collective actions. Such an onslaught hasn’t come to fruition, but attorneys predict more lawsuits before the law expires on Dec. 31, as schools return, businesses reopen, and the cold and flu season begins amid the threat of a Covid-19 resurgence.

“I do expect a wave. Everything has been so fluid. People were in survival mode, just trying to figure out how to handle this unprecedented situation,” said Chelsea Smith, a labor and employment attorney at management-side firm Hall Estill in Oklahoma. “We didn’t immediately feel the full effects. I would anticipate that now we will, with the transition back to school and as companies struggle with what works for them.”

The Bloomberg Law analysis found 72 coronavirus-leave lawsuits filed in federal courts from April to the end of August by largely blue-collar workers, such as mechanics, waiters, and landscapers, but also some medical and office workers.

The vast majority, about 94 percent, allege their employers unlawfully terminated them after they contracted Covid-19 or sought medical treatment when they had symptoms, needed to care for someone who was quarantining, or lacked school or child-care options. A small handful said they did receive leave, but claimed it was unpaid. 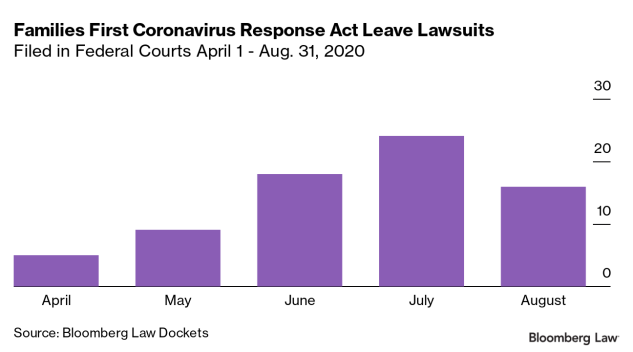 Worker advocates say many employees fall through the cracks because of exemptions written into the law, and low-wage workers may not have the means to bring litigation.

Management attorneys say wading through U.S. Labor Department guidelines and complying with the law has been challenging for companies already facing shrinking bottom lines and upended work structures. Employers that fall under the law should remain flexible with workers who request leave, carefully document their cases, and provide notice of employees’ rights under the measure, they said.

“This law is hard and difficult to comply with. The result is that it creates a lot of questions and reveals a lot of space in the law, where there isn’t clarity,” said Patricia Pryor, a management-side attorney with Jackson Lewis in Cincinnati. “Employers are hurting to understand their obligations.”

The number of FFCRA lawsuits since April peaked with 24 in July, followed by only 16 in August, according to the Bloomberg Law analysis. None are class or collective actions. Florida saw the most lawsuits, followed by Pennsylvania and Michigan.

The law requires employers to provide their workers with up to two weeks of paid sick leave at their regular earnings if they are experiencing Covid-19 symptoms and seeking medical treatment, or are subject to a government or medical quarantine order. Workers also get two weeks of paid sick leave at two-thirds of their typical salary to care for an individual subject to quarantine or a child whose school or day care is closed due to the virus.

Working parents can tap up to 10 additional weeks of family leave, paid at two-thirds of their regular wages, to care for children because they lack school or child care in the pandemic. Companies can claim a tax credit for granting paid leave under the law. 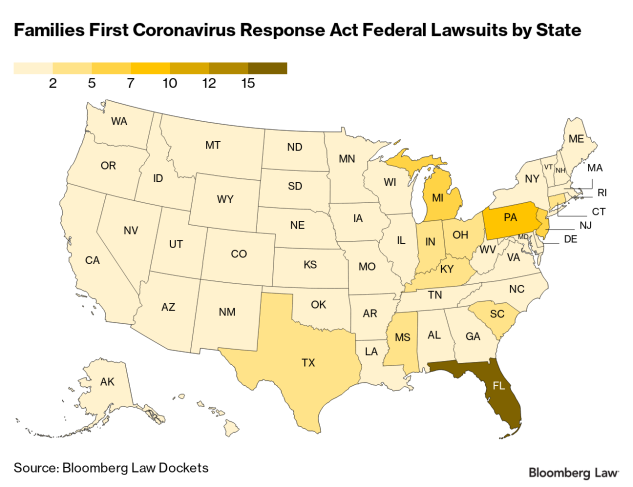 Many of the FFCRA lawsuits remain in the early stages of litigation. Some, including those against Kroger and Holiday Inn Club Vacations, have already been voluntarily dismissed by workers. A Florida court recently rejected a residential and commercial cleaning company’s motion to dismiss a cleaner’s emergency leave suit.

In almost half of the claims, employers allegedly demanded workers return to their jobs or outright fired them after they experienced Covid-like symptoms or contracted the virus. As more states open up businesses, claims could rise from those who have symptoms or are sick themselves, advocates and attorneys said. 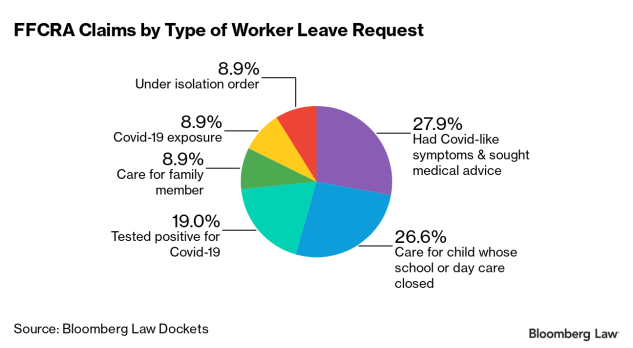 About a quarter of the claims were filed by parents who asked for leave and alleged that their employers didn’t give them the flexibility they needed while schools and day cares remained closed.

“The biggest challenge for employers is going to be recognizing that even if workers can telework, they might not be able to work a traditional 8-hour day,” said Kristen Nesbit, a Fisher Phillips partner in Los Angeles. “School is just now starting up, and parents will have the hard realization that their schedules are upended and their workflow may be disrupted.”

A Better Balance, an advocacy group for women and families, said workers have called their helpline to get guidance about not having access to leave they’re entitled to under the FFCRA. Many workers didn’t know they were covered, or fell through cracks in the law, the group said.

For example, the group said they heard from a mammography technologist who may be an exempt health-care provider under the law. She experienced Covid-19 symptoms and was sent home on unpaid leave while she awaited her test results. She was forced back to work, and received her positive test result three days later. In another example, an HVAC technician who is immunocompromised and needed to care for his 7-year-old son couldn’t take FFCRA leave because his employer is over the 500-worker limit, the group said.

For low-wage workers, who have the hardest time accessing leave, the idea of bringing a lawsuit isn’t financially feasible, said Marcella Kocolatos, managing attorney of direct legal services at A Better Balance.

“There are practical reasons. They need an immediate solution, you can’t wait for a court to decide,” Kocolatos said. “Our take is that this law is great for those who are covered, but many aren’t covered by it. It was a great first step but doesn’t give everyone the rights they need during a crisis.”

Legal uncertainty remains on various facets of the FFCRA, such as whether workers can take intermittent leave without employer approval to care for their children, and whether health-care workers are protected by the law. This has prompted management-side practitioners to advise their clients to err on the side of granting leave until the Labor Department provides more guidance.

Attorneys also advise employers to notify their workers of their Covid-19 leave rights, collect required documentation when requests are made, and provide a notice that explains their decision to grant or reject the leave.

“For employers who say, ‘I don’t care if you feel sick,’ they need to think how that will play out to neutral third-party jurors or a trial judge,” said Nesbit of Fisher Phillips. “Employers need to make good faith attempts to accommodate their employees.”