Litigation has skyrocketed in recent years over workers’ attempts to avoid mandatory arbitration of their employment disputes, resulting in a legal landscape that will remain muddled absent intervention by the nation’s top court.

Federal district and circuit courts since 2019 have issued more rulings on whether plaintiffs are transportation workers engaged in interstate commerce—and thus are exempt from the Federal Arbitration Act—than they did over the preceding 17 years, according to a Bloomberg Law analysis.

The issue, which also has big implications for the gig economy, has divided courts. Some have ruled that the exemption only applies to drivers and other workers in the transportation industry who carry goods across state lines. Others have taken a more expansive approach, finding that a riverboat bartender and supervisors at a truck terminal and a shipping hub were free from the FAA’s binding power.

Recently, a federal appeals court in Chicago ruled that cargo supervisors qualified for the exemption, creating the type of circuit split that could attract U.S. Supreme Court interest.

The conflicting decisions and lack of clarity in the law for this growing legal controversy undermines one of the chief benefits of arbitration, namely that it can be a relatively fast and inexpensive way to resolve claims, legal observers said. Parties can spend years battling over whether they’ll proceed in court or arbitration before they even get to the merits of their cases.

“This is horrific for arbitration,” said Imre Szalai, a Loyola University New Orleans law professor who has written extensively about arbitration. “Arbitration law should be crystal clear, otherwise you have continual fights.” 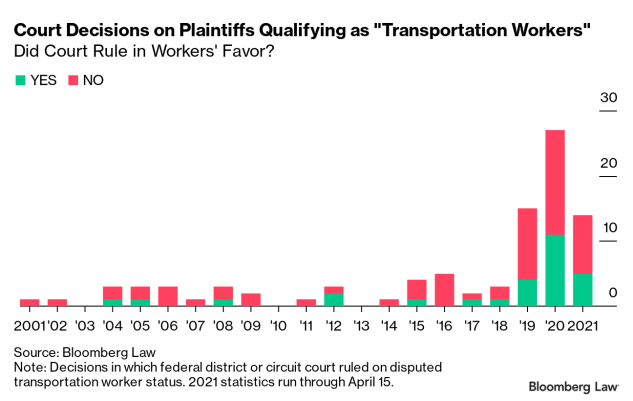 The Supreme Court codified the transportation worker exemption in its 2001 ruling in Circuit City v. Adams. The law’s carveout for “contracts of employment of seamen, railroad employees, or any other class of workers engaged in foreign or interstate commerce” applied specifically to transportation workers, the high court said. But it provided little guidance on applying that carveout.

As a result, courts have diverged on the breadth of the exemption, whether certain workers qualify, what legal tests to apply, and whether state arbitration law controls if the FAA exemption applies, Szalai said.

Over the past two decades, courts have handed down 92 decisions on worker claims that they’re transportation workers exempt from the FAA, with workers prevailing in 30 percent of those cases, according to a Bloomberg Law analysis. Most of those worker wins involved drivers who haul or deliver cargo.

Several factors have driven the boom in litigation over the carveout in recent years, particularly the continued expansion of mandatory arbitration contracts in employment and the emergence of worker classification lawsuits against app-based gig companies, legal observers said.

The Supreme Court added fuel to that fire with its 2019 decision in New Prime v. Oliveira, which clarified that independent contractors—a staple of the gig economy business model—can fall under the transportation worker exemption. 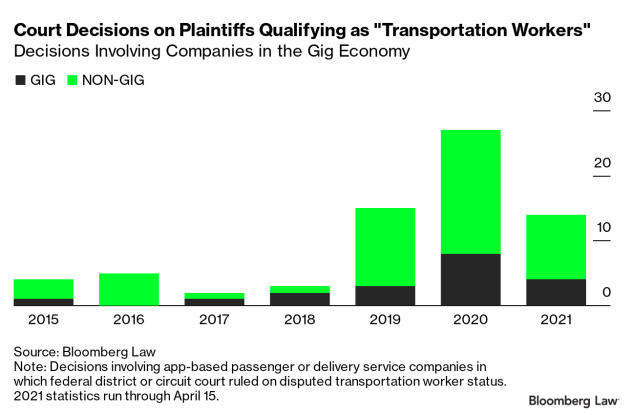 Many of the disputes about the exemption turn on what’s meant for the transportation worker to be engaged in interstate commerce, with variations on that issue percolating to federal appeals courts.

The U.S. Court of Appeals for the First Circuit, for example, ruled in July that delivery drivers were engaged in interstate commerce by delivering goods the “last mile” to customers, even if they didn’t cross state lines themselves. The Ninth Circuit followed suit in August.

But the Seventh Circuit—in a decision penned by , now a Supreme Court justice—ruled in August that delivery drivers weren’t engaged in interstate commerce. Even if they delivered goods that had previously crossed state lines, the drivers weren’t part of the process of interstate travel, the circuit court said.

The First and Ninth Circuits have pending cases on whether the exemption applies to drivers for ride-hail companies and , respectively.

“The Supreme Court is going to have to step in,” said Sarah Rudolph Cole, a law professor at Ohio State University and director of the school’s Program on Dispute Resolution. “It’s all going to come down to what does the Supreme Court think ‘workers engaged in foreign or interstate commerce’ means. The justices have a lot of opportunity to narrow or broaden that definition.”

The Seventh Circuit’s recent ruling granting the FAA exemption to Southwest Airline cargo supervisors appears to be a good candidate for high court review, legal observers said. That ruling created a split with the Fifth Circuit on whether loading cargo on planes can be considered interstate commerce and would give the court an opportunity to clarify muddled case law, they said.

A Chicago federal judge had sent Latrice Saxon’s overtime lawsuit against the airline to arbitration. Saxon’s duties as a ramp supervisor—managing and assisting workers who physically load and unload plane cargo—was too removed from interstate commerce to qualify for the exemption, the judge said.

On review, the Seventh Circuit declined to use the multi-factor test from the Eighth Circuit’s 2005 decision in Lenz v. Yellow Transportation, instead examining Saxon’s role under the transportation worker carveout as it would have been understood when the FAA was passed in 1925.

Involvement in “actual transportation” is required to qualify for the exemption, the Seventh Circuit said in its March 31 ruling. But actual transportation isn’t just the moment of “goods or the people accompanying them cross state lines,” the court said.

“Loading and unloading cargo onto a vehicle so that it may be moved interstate, too, is actual transportation, and those who performed that work were recognized in 1925 to be engaged in commerce,” Circuit Court Judge wrote for the court.

St. Eve, a Trump appointee, was joined on the unanimous panel by Circuit Court Judges , a Clinton appointee, and , a Reagan appointee. The judges said Southwest ramp supervisors do enough physical loading when filling in for missing workers that it was unnecessary to consider whether supervising cargo loading alone would be enough to qualify for the exemption.

The ruling reflects an ongoing shift in how courts are analyzing FAA cases, moving away from a “gut-feeling approach” that advantages arbitration and towards “ordinary statutory interpretation,” said Jennifer Bennett, the Gupta Wessler attorney who represented Saxon.

Bennett also represented the worker in the Supreme Court’s New Prime decision, which was another textualist interpretation of the FAA’s exemption that went labor’s way. But the Fifth Circuit’s 2020 ruling in Eastus v. ISS Facility Services followed the older, gut-feeling style of FAA analysis, she said.

The Fifth Circuit said the carveout didn’t apply to airport workers who oversaw and assisted airport ticketing and the placement of baggage on conveyor belts to be screened and loaded. The FAA draws a distinction between transporting goods and simply handling them, the court said.

Southwest’s attorney, Melissa Siebert of Shook Hardy & Bacon, didn’t respond to requests for comment on whether the airline would seek Supreme Court review of the Seventh Circuit decision.

To contact the editors responsible for this story: at jcasuga@bloomberglaw.com; at ttritten@bgov.com