Corporate strategy of using arbitration waivers in employment contracts may be backfiring. For example, at Uber Technologies Inc., more than 12,000 drivers filed for arbitration beginning in August 2018.
Photographer: Andrew Harrer/Bloomberg via Getty Images

Corporate America rejoiced when the Supreme Court allowed them to force employees to agree to arbitration and forgo their right to sue in workplace disputes.

Employers rushed to include “class action waivers” in contracts.

But now they may be rethinking that approach as some employees are taking those clauses to their extreme. Aided by law firms, they’ve initiated arbitration proceedings by the thousands. The cost for employers could total tens of millions of dollars.

At 12,501 drivers filed for arbitration beginning in August 2018, saying they were misclassified as independent contractors and should be employees. Similar arguments have failed in court. But that doesn’t mean employees can’t arbitrate those claims.

The cost for Uber to initiate all of the proceedings with a required $1,500 filing fee would be more than $18.7 million. Each individual arbitration would run tens of thousands of dollars.

Critics have derided arbitration clauses as a way to minimize workers’ voices and deny them their day in court. But the tactic of mass arbitration may give employees an upper hand in settling disputes or forcing a settlement.

“If it’s successful, I think it is a creative way that lawyers are trying to help individuals actually vindicate their claims,” arbitrator and Ohio State University law professor Sarah Rudolph Cole said.

It also may be speeding up a growing reluctance among some firms to include class action waivers. 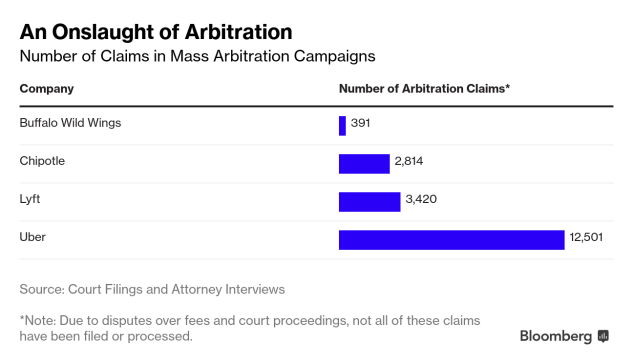 He’s one of a handful of lawyers representing employees at in a series of lawsuits dating back to 2013. Employees allege the company committed numerous wage-and-hour violations at stores across the country. Workers routinely would be asked to complete cleaning and other tasks while off the clock to meet unrealistic labor expense goals, Williams said.

“We didn’t know that,” Williams said. “We didn’t find out that they were requiring that until almost a year later.”

About 10,000 employees opted in to the collective action lawsuit Williams was pursuing and 2,814 were tossed out for having signed class action agreements. But with these employees already on board to pursue lost wages and their claims already vetted, Williams decided to go ahead and arbitrate the cases one-by-one like Chipotle said needed to happen.

Chipotle declined to comment due to the ongoing nature of the litigation.

Mass arbitration campaigns are being waged with at least four companies. Chipotle, Uber, , and each were hit with hundreds or thousands of arbitration requests.

Employees at Buffalo Wild Wings also initiated arbitration over wage-and-hour disputes after being tossed from a collective. Workers at Uber and Lyft are seeking arbitration hearings over their classification as independent contractors.

Buffalo Wild Wings has since settled with the claimants to avoid arbitration but the other three companies continue to fight the arbitration demands in court.

The mass dispute filings at the four companies are “a curious use of arbitration,” said law professor Thomas E. Carbonneau, the director of the Institute of Arbitration Law and Practice at Pennsylvania State University.

“I’m not sure the lawyers are doing arbitration justice,” Carbonneau said. “They’re not using it properly. They’re adjusting it, adapting it, and in some degree corrupting it.”

Legal observers told Bloomberg Law that the attorneys behind the mass arbitration proceedings may not actually intend to arbitrate every claim. Instead, they’re gaining leverage so they can negotiate a settlement for workers rather than arbitrate.

“The technique is to say, look, we’re going to file just a ton of individual employment claims and that’s going to force Uber or whoever to the table,” said Ohio State’s Cole.

The end game is to “always, always” get a settlement because it’s cheaper, Carbonneau said.

The companies hit with mass arbitration filings have so far struggled with how to respond.

Attorneys for the claimants at Uber and Lyft filed motions in federal court to compel arbitration after the two companies failed to pay the majority of filing fees to initiate the arbitration process.

Chipotle has challenged the arbitration proceedings multiple times in court but was unable to get the claims thrown out or the claimant’s attorneys disqualified as representation.

Williams, the attorney on the Chipotle case, said that watching the company’s reaction to the arbitration filings has been like watching a slow-motion train wreck.

“I have been puzzled by their reaction to all of this,” he told Bloomberg Law. He said that the company is waging a war of attrition hoping that employees feel the claims are no longer worth pursuing.

The feet-dragging is a terrible strategy, Cole said.

“I don’t get how that’s going to work because I’m an arbitrator and if somebody isn’t going to respond, I’m going to order default judgment against them at some point,” she said.

Even if the mass arbitration strategy is successful, it may be hard to replicate.

Very few people have the expertise and capital to engage in a campaign of mass arbitration filings, a plaintiff’s attorney familiar with these types of campaigns told Bloomberg Law.

Mass arbitration is a more attractive strategy when class or collective actions are already in progress, said Williams, the attorney in the Chipotle proceedings.

As lawyers discover the strategy of mass arbitrations, companies already may be souring on the extensive use of arbitration and class action waivers. The mass filings may be quickening firms’ reluctance to rely solely on arbitration. 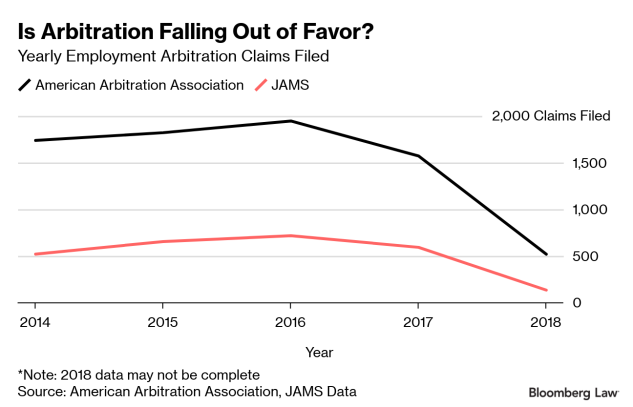 Companies rushed to include class action waivers after the Supreme Court’s 2011 decision in AT&T Mobility LLC v. Concepcion that found the Federal Arbitration Act permits class action waivers. But employment arbitration claims peaked around 2015 and have been declining since then, said Doug Hass, a general counsel at Lifeway Foods and member of the Association of Corporate Counsel.

Employers don’t like the uncertainty that comes with arbitration. There’s limited case history to know how an arbitrator might rule and if the result is unfavorable, there’s no recourse or appeal. The threat of mass arbitration may quicken the pullback already in process, he told Bloomberg Law.

“Everybody walks away a little bit unhappy,” Hass said.