and are among the federal contractors that shelled out a combined $16.4 million to settle workplace discrimination allegations with the Labor Department in fiscal year 2018, which includes the second year of the Trump administration.

That’s the third highest collection by the DOL’s Office of Federal Contract Compliance Programs in the agency’s history, according to the office’s acting head and a Bloomberg Law analysis of government data. But it’s still a drop from the record $23.9 million it collected the previous year.

Federal contractors could pony up even more settlement dollars in the current fiscal year, which runs through the end of September 2019.

“We think that we have a good chance, in this upcoming fiscal year, to have the largest year on record by a fair amount,” the OFCCP’s acting director Craig Leen said in public remarks Nov. 2. 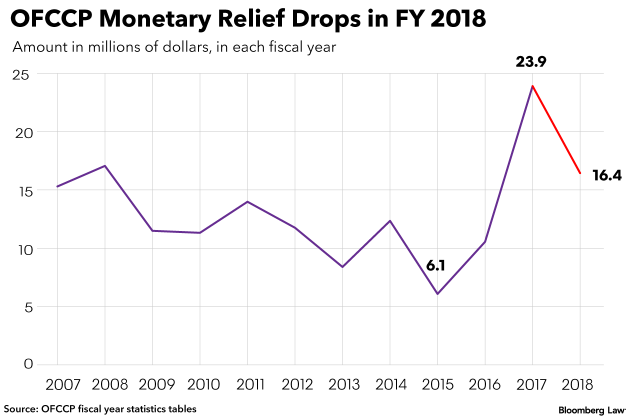 Lawrence Lorber, an attorney with Seyfarth Shaw in Washington and a former OFCCP director, confirmed to Bloomberg Law that more large settlements could be in the agency’s pipeline.

“I do know that they are looking at some potentially big cases,” Lorber said. He declined to elaborate further on the pending cases.

One of the agency’s potential high-dollar settlements in the coming year could be with The tech company reached a pay bias settlement with the OFCCP earlier this year that allegedly fell short from being finalized after Labor Secretary thought Microsoft was being let off the hook too easily.

When recently asked about the status of the Microsoft settlement at a Nov. 2 public meeting, Leen declined to comment.

Thousands Eligible for Back Pay

More than 12,000 job applicants and employees are eligible to receive monetary relief from the FY 2018 settlements that federal contractors reached with the OFCCP.

The office reached 58 financial settlements in FY 2018, up from 47 in the prior year. The agreements resolved allegations of discrimination, such as in hiring and pay. Contractors that settled with the agency in the past fiscal year include the University of Maryland, and Birds Eye.

Financial recovery totals are posted on the OFCCP’s By the Numbers website. Individual settlement agreements are also posted to its Freedom of Information Act Library. However, only 38 of the 58 fiscal 2018 agreements are currently available.

A Labor Department spokesman told Bloomberg Law that the OFCCP would publicly post the remaining settlements by Nov. 19, but otherwise declined to provide comment for this story.

—With assistance from Porter Wells