“Most of the cutting edge work is going on here,” he said.

After completing a master’s in computer science, Varshney will start an internship next month at PayPal through a program known as Optional Practical Training.

The program allows international students on F-1 visas to work for 12 months in their field in the U.S. or for up to three years if they graduated from a STEM program. Current students can also work part time through the program. Participants have landed work at firms such as , , , and.

But the OPT program could be on the chopping block as President Donald Trump’s administration weighs new restrictions to non-immigrant visa programs.That prospect is worrying college groups as well as employers who rely on the talent the program provides.

The Wall Street Journal, citing administration officials, reported over the weekend that the Trump administration is expected to set temporary restrictions on practical training as part of a wider package of limits on immigration.

The Department of Homeland Security, which oversees the program, is assessing how the OPT affects the U.S. workforce, spokeswoman Carissa Cutrell said in an e-mail to Bloomberg Government.

“The department is reviewing several mechanisms to protect jobs for American workers while closing loopholes exploited by immigration fraud and continuing to support the U.S. economy,” she said. Changes to practical training programs must generally move through the federal rulemaking process, she added. That could take months unless the administration issues a temporary final rule that would go into effect immediately.

Optional Practical Training has been a long-term target for some conservative lawmakers who favor wider restrictions on legal immigration and temporary work visa programs. 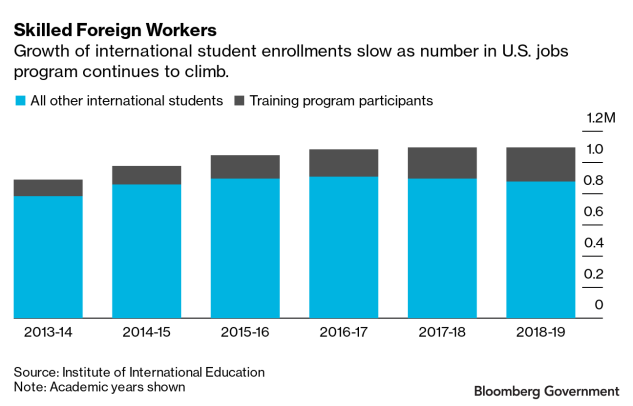 The new scrutiny of the program compounds the financial pressure and wider uncertainty students from abroad have faced as the coronavirus pandemic forced college campuses to shut down. Many students from abroad don’t know whether they can travel between their home countries and the U.S. later this year or attend classes in person because of social distancing guidelines.

And although they’ve faced financial pressures like those of American-born peers, international students were left out of emergency pandemic relief provided by the CARES Act () because of guidance from the Department of Education. Almost 9 in 10 colleges, in a survey released this month, projected a drop in international enrollment in the next academic year.

While colleges sort through those challenges, education groups are making the case to federal officials that Optional Practical Training is an essential tool for bringing international students to U.S. campuses.

“This should not be an us versus them type of conversation,” said Lauren Inouye, vice president for public policy and government affairs at the Council of Graduate Schools.

The number of students participating in the OPT program has risen in recent years, surpassing 200,000 two years ago. New international students on U.S. campuses, by contrast, have declined since the 2015-16 academic year.

In the 2018-19 academic year, when Varshney started at ASU, about 4,000 of 13,000 international students enrolled at the school were participating in Optional Practical Training.

The foreign workers employed at U.S. companies through the OPT program will help fuel a faster recovery from the coronavirus pandemic’s damage to the economy, Varshney said.

“We are already trained and have already learned the latest technologies,” he said. “We are ready to work and provide for the economy.”

Cutting participation in the OPT program would lead to a loss of jobs for American-born workers because the loss of talented workers would lead to slower economic growth, a 2018 Business Roundtable analysis found.

Firms in the U.S. depend on programs like OPT for skilled workers, said Scott Corley, executive director of Compete America.

“Our science and technology research enterprise is a massive success story,” he said. “At no point did it not involve a significant number of foreign professionals.” 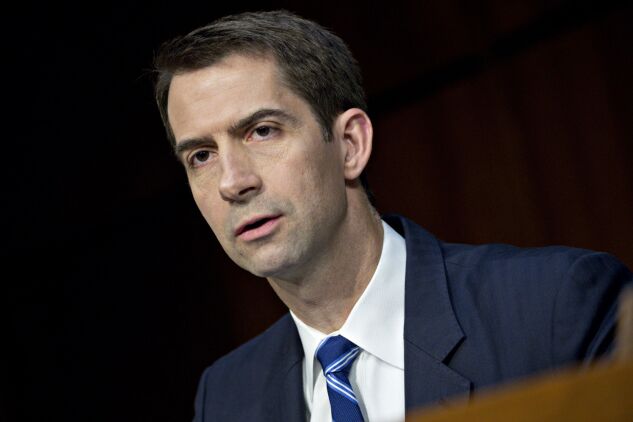 The Trump administration said in April that it would consider recommendations from several agencies for restrictions on temporary visa programs. Homeland Security acting Secretary later said Optional Practical Training would be on the table as part of that review.

Republicans in the Senate soon after urged the White House to suspend the program, arguing that U.S. college graduates could fill the jobs employing recent international students.

“While the merits of such a program are subject to debate, there is certainly no reason to allow foreign students to stay for three additional years just to take jobs that would otherwise go to unemployed Americans as our economy recovers,” wrote Sen. (R-Ark.), in a letter this month also signed by Sens. (R-Tex.), (R-Iowa), and (R-Mo.).

The Republicans argued mass unemployment driven by the coronavirus pandemic should lead the administration to suspend work-based visa programs until the economy recovers.

Limiting Optional Practical Training would predictably hurt U.S. colleges’ competition for international students, said , vice president for governmental affairs at the Association of Public and Land-grant Universities. Countries like Canada, the U.K., and Australia in recent years have strengthened policies to attract talent from abroad.

“Without OPT, there are many other countries that international students can go to and find those training opportunities,” he said. “Eliminating or curtailing the program would be a very significant self-inflicted wound.”

A drop in international enrollment would also be costly for colleges, which often rely on the higher tuition they can bring in. That would exacerbate a financial emergency driven by campus closures and looming cuts to state funding, Lindwarm said.

Cotton’s office didn’t respond to a request for comment about the potential impact of suspending the program.

In a call with reporters last week, Senate Health, Education, Labor, and Pensions Committee Chairman (R-Tenn.) said the federal government’s response to coronavirus should focus on supporting testing, treatment, and a vaccine for the virus, not restrictions for international students with a chance to work in the U.S.

“Most of the companies who hired them would say that part of getting our country back to work is giving companies an opportunity to hire those students if they need to,” Alexander said. 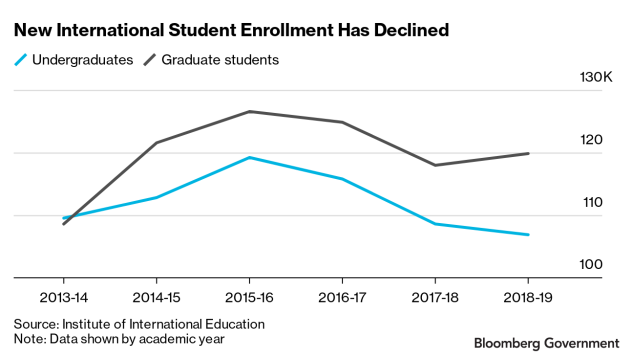 Hundreds of thousands of international students study at U.S. colleges. Most don’t participate in Optional Practical Training and they can’t work off campus or obtain federal student aid. On many campuses, foreign students confront the same sudden cash crunch as American-born peers paying for rent or food.

“They just have fewer levers to pull to get help,” said Brian Rosenberg, president of Macalester College in St. Paul, Minn.

The Education Department’s guidance last month slammed the door on foreigners receiving any of the $6 billion in aid to college students from the CARES Act. Colleges such as Macalester helped those students by using their own funds or, in some cases, by raising money.

The DHS responded to campus closures in the wake of the pandemic by lifting a cap on online courses that students on F-1 visas could take and maintain visa eligibility. That flexibility will continue as long as the pandemic persists.

But even if campuses reopen in the fall, it remains to be seen if they can get approval for new visas in time for the beginning of the semester, said , senior director for public policy and legislative strategy at NAFSA: the Association of International Educators.

“The biggest challenge is the uncertainty,” she said