Union academic workers and supporters march and picket at the UCLA campus amid a statewide strike by nearly 48,000 University of California unionized workers on Nov. 15, 2022, in Los Angeles.
Photo by Mario Tama/Getty Images

One university faculty union recently went on strike and another threatened to walk off the job before they each reached agreements with their respective schools, a signal that labor unrest in higher education will continue to surge in 2023.

University of Illinois Chicago faculty members struck for nearly a week before their union came to terms with the administration over the weekend. A union representing professors at New York City’s Fordham University also set a Jan. 30 strike deadline before agreeing to a new labor contract last week.

The membership of each union must approve the tentative deals before they go into effect.

Meanwhile, graduate student workers at Temple University in Philadelphia authorized a strike in a November vote, though they haven’t set a trigger date.

“We’re going through a post-pandemic strike wave,” said William Herbert, executive director of the National Center for the Study of Collective Bargaining in Higher Education and the Professions at Hunter College-City University of New York.

The ongoing labor strife on college campuses is part of a broader trend of increased strike action across the US economy. Union work stoppages hit a 17-year high in 2023, according to Bloomberg Law’s database of work stoppages.

Professors, graduate teaching and research assistants, and other academic workers went on strike 15 times in 2022, headlined by the University of California system strike that lasted nearly six weeks and involved 48,000 graduate student workers. The year saw the most strikes by academic workers in higher education in at least 20 years, a review of the work stoppages database showed. 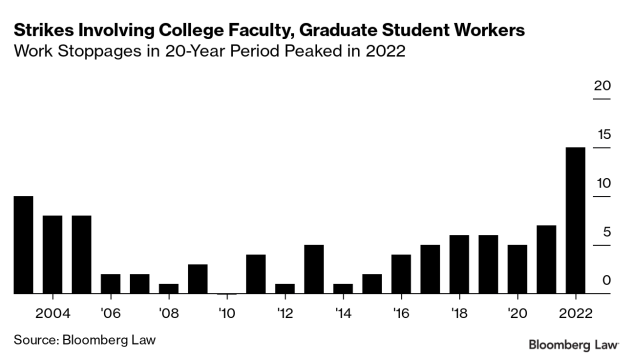 Employment conditions for many workers in higher education—particularly low pay relative to the workload—have fueled growing labor militancy among graduate student workers and faculty working on a contingent basis for years, according to union leaders.

“The tipping point was the pandemic,” said Todd Wolfson, a Rutgers University professor and vice president of the union representing graduate student workers, postdoctoral associates, and faculty at the New Brunswick, N.J., school. “That exposed universities and colleges for what they are, prompted a deep reckoning with work, and led to a shift in people’s stance in what they’re willing to take.”

About three in five faculty members were on contingent appointments in 2020, according to a 2022 survey report from the American Association of University Professors, a professional organization with local chapters that collectively bargain at some schools. That includes the roughly 40% of faculty who were on part-time temporary contracts.

Part-time faculty members earned an average of $3,850 per course, and about 65% of schools provided no health-care benefits to those adjunct professors, according to the AAUP survey report.

In the past, adjunct professors primarily were professionals with full-time employment elsewhere who taught a class to share their expertise, said Barbara Mistick, president of the National Association of Independent Colleges and Universities. But higher education has become a “very competitive marketplace” with fewer job openings for workers with advanced degrees, she said.

“Now you see contingent faculty trying to pull together full-time positions by layering together contingent assignments,” Mistick said. “I have no doubt they feel very frustrated. It’s hard.”

Universities also have embraced a corporatized model of governance, marked by an explosion in the size of administrations and the adoption of hierarchical, unilateral decision making focused on minimizing labor costs, said Risa Lieberwitz, a workplace law professor at Cornell University in Ithaca, N.Y.

The combination of the “economic exploitation of employees”—through the reduction in tenured positions and increase in underpaid faculty without job security—with the lack of a more democratic governance model has sparked a growth in unionization and a greater possibility of strikes, said Lieberwitz, who also serves as general counsel for the AAUP.

While public divestment in higher education has driven the expanded use of adjunct professors, colleges are generally “great employers,” said Steven Bloom, assistant vice president of government relations at the American Council on Education, which represents 1,700 colleges, universities, and related organizations.

But academic union leaders voiced a level of frustration that suggests many workers will strike if they can’t win a contract that improves their situation.

“We’re at the point where these issues are no longer simmering, but at a full, raging boil,” said Mia McIver, who until last year led the University Council-AFT, a union representing contingent faculty and librarians at the University of California. “Looking at American higher education from the broadest possible perspective, colleges and universities are failing their workers.”

UC-AFT authorized a strike before reaching a labor deal in November, said McIver, a lecturer at the University of California-Los Angeles’ writing program.

Adjunct faculty at New York City’s New School walked off the job in November before agreeing to a new collective bargaining agreement, while New York University adjuncts reached a deal after authorizing a strike. Both worker groups are represented by a United Auto Workers affiliate based in New York City.

Unionized faculty at the University of Illinois Chicago went on strike Jan. 17, after starting negotiations in April 2022 and working without a contract since August.

“We would not have won this agreement without the strike,” Krall said.

To contact the editor responsible for this story: at lfrancis@bloomberglaw.com; Rebekah Mintzer at rmintzer@bloombergindustry.com