NaLyssa Smith of the Baylor Lady Bears drives to the basket ahead of Aaliyah Edwards of the UConn Huskies during the first half in the Elite Eight round of the NCAA Women's Basketball Tournament in March 2021 in San Antonio, Texas. Title IX, passed in 1972, prohibited sex discrimination at federally funded educational institutions.
Photographer: Carmen Mandato/Getty Images

College athletes would be treated as employees and get the right to form unions under legislation congressional Democrats are proposing.

The bill, unveiled Thursday, would amend the National Labor Relations Act to define athletes as employees if they receive any compensation from their college. It would direct the National Labor Relations Board to consider athletes in the same athletic conference as part of the same bargaining unit. It would ban agreements such as scholarships that waive an athlete’s rights to bargain collectively.

The proposal demonstrates the growing pressure to redefine the role of athletes participating in the multibillion dollar college sports enterprise overseen by the National Collegiate Athletic Association.

Having the right to unionize “will help athletes get the pay and protections they deserve and forces the NCAA to treat them as equals rather than second-class citizens,” Sen. (D-Conn.), one of the bill’s sponsors, said in a statement.

Chances of enactment are slim because of partisan divisions over overhauling federal labor laws and a Senate rule requiring support from 60 senators to force a floor vote. Democrats control the Senate with a bare majority. 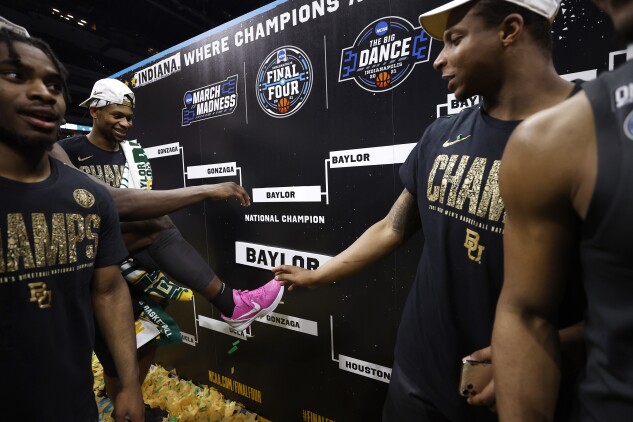 Davion Mitchell #45 and Mark Vital #11 of the Baylor Bears look at a completed bracket after their team beat the Gonzaga Bulldogs for the NCAA basketball championship in Indianapolis, Ind. on April 5, 2021. Democrats are pushing for college athletes’ right to unionize.
Jamie Squire/Getty Images

Previous proposals in Congress have called for new health and safety standards for NCAA athletic programs and for athlete compensation. Labor groups, meanwhile, are campaigning to get a handful of Senate Democratic holdouts to back legislation (), called the PRO Act, that would lower barriers for workers to form unions and win contracts with employers.

The NCAA, in a response to the bill, rejected classifying athletes as workers.

“College athletes are students and not employees of their college or university,” the statement said. “This bill would directly undercut the purpose of college: earning a degree.”

Northwestern University football players’ attempt to form a union failed at the NLRB in 2015. Pressure still mounted in subsequent years to address athletes’ status and compensation.

The Democrats introduced the measure as bipartisan talks unfolded in recent years over a federal framework allowing athletes to profit off their names, images, and likenesses. The NCAA governing board last year endorsed changing its rules to allow third parties, but not colleges themselves, to compensate students.

NCAA President Mark Emmert recommended this month that the board target July 1 to approve new rules. Name, image, and likeness laws in several states are set to go into effect then.

Lawmakers have said they don’t want a patchwork of state rules, while indicating during a hearing last year they aren’t inclined to let the NCAA establish a national framework.

To contact the editors responsible for this story: at rmeszoly@bgov.com; at ktrygstad@bgov.com