When New Jersey shuttered bars and restaurants in the state due to the coronavirus, it was a tough break for Lenny Donnelly, 64, who had worked as a bartender in Atlantic City for more than 30 years.

But things could have been worse. His employer, The Golden Nugget casino, agreed to pay him for two weeks at a reduced rate before he’s laid off.

“Not at our regular rate, but more like minimum wage, though it’s something,” he said. “Then I’ll have to sign up for unemployment.”

Areas like southern New Jersey include an especially high proportion of bartenders and wait staff in the workforce, who rely on tips for the bulk of their income.

Such workers are particularly vulnerable, as there’s no national standard for whether their tips count as income when applying for unemployment. Instead, each state has its own rules, and it can be a struggle for workers to figure out, especially with many state websites freezing up under the load and phone lines ringing off the hook.

Meghan Cohorst, a spokesperson for the national labor union Unite Here, which represents food service, hospitality, and transportation workers, said even the union is trying to wrap its arms around what tipped workers in all 50 states qualify for, so it can help its members.

“Part of the reason there’s so much uncertainty for people right now is that if we don’t even know ourselves yet, they have no idea what aid might be coming to them,” she said of tipped workers. 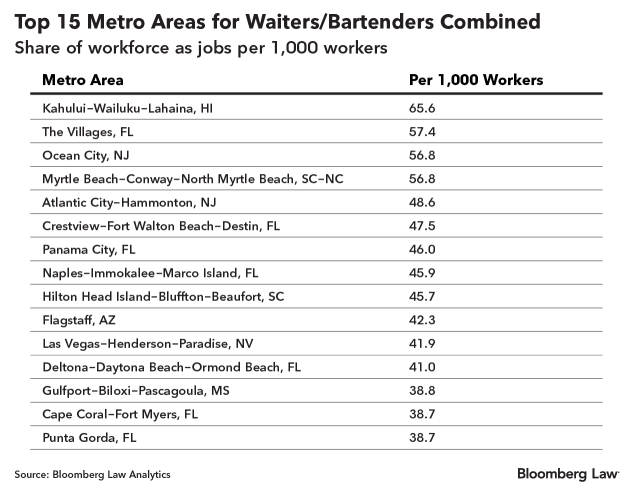 In Cape May County to the south, nearly 57 of every 1,000 workers are employed as bartenders or waiters/waitresses, according to Labor Department data. That’s three times the rate of the New York City, San Francisco, or Seattle metro areas.

The top 20 by that measure is populated not by big cities but by numerous coastal beach towns and resort destinations like Naples, Fla., Gulfport, Miss., and Salisbury, Md. (The only major city in the Top 20 is Las Vegas.)

As the coronavirus continues to spread, those who make their living serving drinks and food are feeling the financial pain no matter where they live.

Nationwide, waiters and waitresses make up more than 2.5 million workers representing an estimated $67 billion in annual earnings, according to the latest Labor Department data from 2018. Bartenders account for another 630,000 workers earning an estimated $17 billion.

Now an increasing number of those workers are jobless. At least 32 states and the District of Columbia have now told residents to stay home, and restaurants and bars have been shut down for all but take-out and delivery—if they’re open at all. 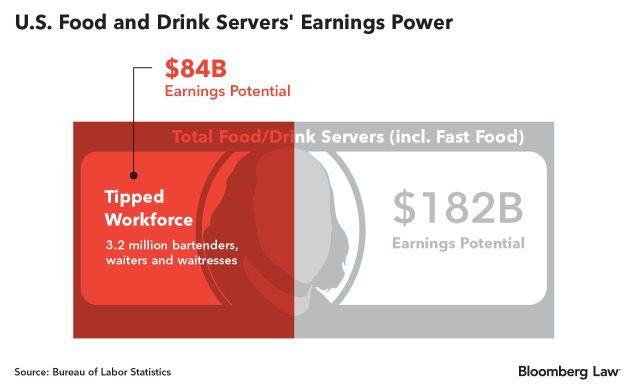 Maria Campos, 57, has worked for decades waiting tables at LaGuardia Airport, most recently at the Prime Tavern restaurant along Terminal D.

Now laid off, Campos doesn’t know how long she can hold on financially without help. She’ll have trouble making the next mortgage payment, she said, and her health insurance through the restaurant is being terminated at the end of March, leaving her scrambling to get a doctor’s appointment before that happens.

She would try cleaning houses, but people don’t want a stranger in their home right now who could bring the coronavirus. She’s even considered collecting garbage or thrown-out bottles in her neighborhood for cash but is concerned it’s too dangerous with the virus raging.

“I can’t even collect bottles in the streets,” Campos said. “They’re probably infected, you can’t be touching stuff like that right now.”

About 300 miles away in Rochester, N.Y., Donny Clutterbuck is a longtime bartender who has worked for the past five years at the French-themed bar called Cure.

Clutterbuck also serves on the board of the United States Bartenders’ Guild, and the organization has also been trying to help bartenders in need around the country. The group’s associated charity is raising money from alcohol makers and other industry players as part of an emergency assistance program.

Donors include the makers of Jameson Irish Whiskey, who’ve given $500,000, and on Saturday, Miller Lite announced it was pledging $1 million.

“Right now, most people have only missed a single paycheck, but soon they’ll have missed two, and rent’s coming due at the end of the month,” he said. “When it’s the fifth of April and people are five days late on paying their rent, that’s when things could get really tough for them.”

Clutterbuck himself was laid off and is trying to keep the bar he loves afloat by offering to deliver pre-mixed bottles of drinks to regular customers around Rochester. He said seeing a familiar face when he’s placed a bottle on someone’s doorstep has helped him cope.

“Seeing the smiles from people was great,” he said. “That little bit of connection with people.”

Bailout Bill May Not Suffice

In Washington, part of the mammoth $2 trillion bill just signed into law is aimed at helping small businesses with $350 billion in loans that can be forgiven if used for keeping employees on the payroll.

While that sounds encouraging on its face for bartenders and wait staff, the new legislation generally does not apply to businesses that have already fired their workers—which is the case for most restaurants and bars.

Meanwhile, the law also boosts payments to workers receiving unemployment, given that generally, unemployment only covers a small portion of a person’s actual earnings.

But once again, that leaves tipped workers navigating a patchwork of state rules about how much their “earnings” number is based on. In some cases, if workers report their tipped income on their taxes each year, that money can count toward their unemployment eligibility.

In other states, it’s less clear.

There is one technological change that may benefit workers: the vast majority of restaurant and bar patrons now tip through credit and debit cards, leading to much higher percentages of tipped income being officially recorded.

“If this had happened in early 2000s, we’d be in a much different situation,” said Clutterbuck. “Those who complained about credit cards becoming the norm and wanted to keep things off the books are now glad things changed.”

To contact the reporters on this story: in Washington at akessler@bloomberglaw.com