Visitors to the 92-foot long #IMMIGRANTSAREESSENTIAL art installation on the National Mall in Washington write messages of support on Oct. 5, 2021, as the Biden Administration, House and Senate negotiate a reconciliation bill. The installation was sponsored by National Immigration Law Center & Resilience Force.
Paul Morigi/Getty Images for Working Families

Immigrants in line for a green card for years or decades have new hope that chronic backlogs will finally be addressed as lawmakers from both parties and the Biden administration train their sights on the issue.

Paperwork processing delays—which have hit immigration programs across the board—mean longer wait times for applicants to secure permanent resident status. The expiration of as many as 80,000 unused green cards for fiscal 2021 at the end of September added to frustrations for long-waiting applicants from India and China hoping to make the U.S. their permanent home.

Multiple legislative proposals would make expired green cards from previous years available to applicants and provide additional funding to U.S. Citizenship and Immigration Services, the agency charged with adjudicating green card applications. But the fate of those proposals remains uncertain as lawmakers haggle over other big-ticket agenda items.

USCIS Director Ur Jaddou has also identified reducing wait times for immigration benefits as a top priority at the agency.

“It was already bad before the pandemic,” Sarah Hawk, an immigration attorney at Barnes & Thornburg LLP, said of the wait times. “We need a long-term solution for the backlog.”

Caps on green cards for each country of origin already created long waits for workers from India and China, which made up about 82% of the backlog last year, according to a Cato Institute analysis. Only 7% of 140,000 employment-based green cards each year can go to individuals from a single country. About half of applicants each year are already in the U.S. with work authorization but would get permanent ability to live and work in the country. 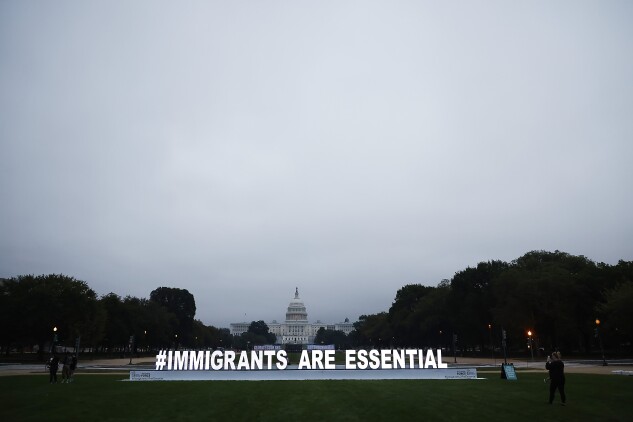 A large art activation on the National Mall for the National Immigration Law Center and the Resilience Force’s #ImmigrantsAreEssential campaign, pictured on Oct. 5, 2021, in Washington, D.C.
Photo: Paul Morigi/Getty Images for Working Families

USCIS was barely getting through that number before the Covid-19 pandemic and policy changes by President Donald Trump’s administration slowed down the processing time for each application. The pandemic led to staff shortages and shutdowns of government offices while the Trump administration tripled the length of application forms, among other changes.

“The Trump administration handed them a really disastrous deal,” said David Bier, a research fellow at the Cato Institute. “The Biden administration has partially reversed it, but not all the way.”

Democratic lawmakers offered hope to backlogged green card applicants in September when they proposed measures that would recapture more than a million unused employment-based and family-based visa numbers going back to 1992. The proposal would also allow eligible applicants to pay a fee to bypass overall or per-country caps on visas.

The House Judiciary Committee advanced the green card proposal as part of the sweeping tax and social spending bill Democrats are attempting to hash out through a partisan budget reconciliation process. The Senate parliamentarian, who decides what’s eligible to advance through that process, has rejected broad legalization measures that expand eligibility for lawful permanent resident status for undocumented immigrants as too policy-oriented for the budget process. She hasn’t reviewed the green card proposal, lawmakers say.

Green card recapture proposals may have a better chance because they wouldn’t create a new legalization program, said Kristie De Peña, vice president for policy and director of immigration at the Niskanen Center.

“It only affects the timing of adjustment as opposed to who is eligible to adjust their legal status,” De Peña said.

Yet some senators have expressed resistance to addressing legal immigration backlogs without also pursuing protections for millions of undocumented immigrants. Several House progressives have called on party leaders to pursue both, even as Democrats scramble to trim the overall price tag to appease moderates in their party. 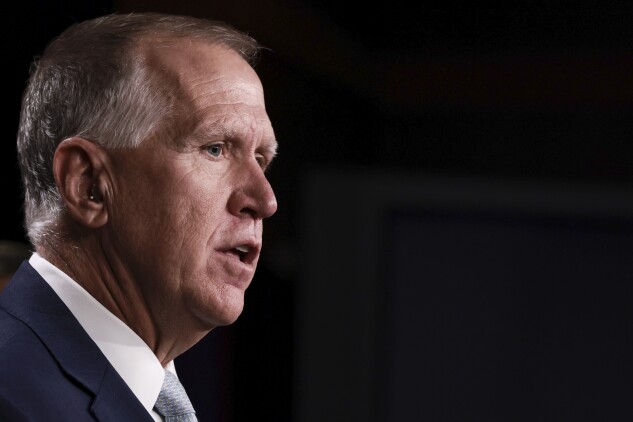 Republicans have also expressed interest in salvaging lost green cards. GOP lawmakers recently introduced legislation in both the House and Senate that would add tens of thousands of unused employment-based numbers from the past two fiscal years back to the employment pool.

Sen. (R-N.C.), the sponsor of the Senate measure, told Bloomberg Government he’s confident the bill will advance this year, either through a fast-tracked Senate floor process or attached to other legislation. Lawmakers have intervened to save unused green cards at least twice before.

House appropriators setting the Department of Homeland Security’s budget agreed in July to include an amendment to roll over the past two years’ unused family, employment, and diversity visas for future use. Sen. (D-Conn.), who leads the Senate Homeland Security Appropriations Subcommittee, said he’s not sure yet whether the panel’s spending bill will include similar measures.

A sweeping immigration bill the White House sent to Congress earlier this year (introduced as ) also includes both legalization and green card recapture provisions, but it has stalled while Democrats pursue immigration measures through reconciliation.

Separately, Congress has previously sought to address per-country caps for employment-based green cards that can create long wait times for some applicants. The Senate late last year passed legislation that would end those caps. The bill included several controversial amendments, however, and ultimately failed when lawmakers couldn’t reconcile the legislation with a version passed by the House in 2019.

Jaddou, the USCIS director, said in a speech this month that an “agency-wide effort to address processing delays and backlogs” is underway, although she offered few details of planned changes.

Even if Congress boosts the number of available green cards, “there’s still a question whether USCIS has the capacity to process all of those applications,” said Julia Gelatt, a senior policy analyst at the Migration Policy Institute.

Indian and Chinese applicants will likely still face long waits even if the agency expands its capacity unless Congress revisits per-country caps. But immigration advocates argue USCIS could be doing more, saying it already received infusions of stopgap funding from Congress to stave off furloughs. Emergency funding for USCIS included in a last year required a five-year plan from the agency on how it would transition to electronic filing of applications.

Attorneys say the agency could eliminate in-person interview requirements for routine cases. It could also modify lengthier applications implemented by the Trump administration and largely left in place under Biden.

“The idea that USCIS does not have the resources is not true. They don’t have the will,” said Charles Kuck, an immigration attorney at Kuck Baxter Immigration.

The agency made a concerted effort to process as many as 8,000 applications each week over the summer, while the expiration of unused green cards loomed, said Shev Dalal-Dheini, director of government relations at the American Immigration Lawyers Association. But those numbers likely aren’t sustainable without slowing applications for other benefits, she said.

“The hope is that USCIS is able to come up with a reasonable plan for efficiency in adjudications,” she said.