Christopher Dodd, former Democratic senator from Connecticut, sits for a photograph after an interview in Washington, on Aug. 29.
Photographer: Andrew Harrer/Bloomberg

He played major roles in all three, and he says people are surprised to hear which one was most important to him.

“If you ask me whether or not I cared more about derivatives and swaps, or whether I cared more about paid leave, there’s no debate. I much prefer the issues involving human beings and what happens to them,” he told Bloomberg Law.

Sen. Dodd’s footprint on leave for workers is large. He led the charge to create the Family and Medical Leave Act in the 1980’s, and continued to work with colleagues to turn unpaid leave into paid time off. He now spends his time working on bipartisan solutions for a national paid leave plan—including how to pay for a program, how costs may affect businesses, and the scope of needs for leave that workers experience. On the latter he is particularly active, as a caregiver to several of his siblings.

Now he sees the momentum of paid family leave programs in states across the U.S. and in Congress mirroring the momentum he felt in the run-up to passing the FMLA. “We’ve got a lot of evidence now after a quarter of a century that this has worked far better than anyone might have anticipated, particularly in the business community,” he said of the landmark leave law enacted in 1993.

“I don’t know of another senator who has had as much impact on behalf of children and working families,” Rep. (D-Conn.), told Bloomberg Law.

DeLauro was diagnosed with ovarian cancer while she was Dodd’s chief of staff, in 1986. “I went to see him and told him, I think on a Thursday, that on Sunday I was going in to the hospital and I didn’t really know if I was going to ever return,” she said.

DeLauro’s doctors told her she would need surgery and treatment for several months. “When I went to tell him this he just said to me, ‘Rosa, take all the time you need to get better. Your job is here, your paycheck is here.’”

DeLauro was about to move off of the Senate payroll to manage Dodd’s second Senate campaign. “And he said to me ‘My campaign doesn’t start until you get back,’” DeLauro said.

DeLauro was gone for almost three months, and she said he kept his promise. “Never a worry about my job or my paycheck.”

As a Senate aide, she didn’t have protected leave. But she did have her boss, Chris Dodd.

Now, continuing the work they started together, DeLauro is the lead House sponsor of the FAMILY Act, a bill (S.463/H.R.1185) that would create a national paid family and medical leave program through a social insurance payroll tax. 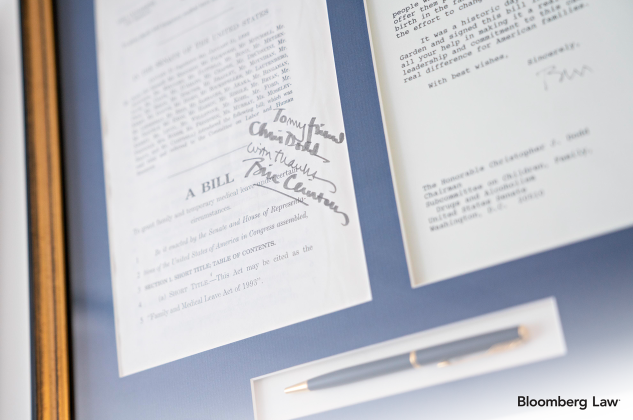 A signed copy of the The Family and Medical Leave Act of 1993 (FMLA) hangs in the office of Christopher Dodd, former Democratic senator from Connecticut, in Washington, on Aug. 29.
Photographer: Andrew Harrer/Bloomberg

The passage of the nation’s only leave statute, the Family and Medical Leave Act, began like many major pieces of legislation, according to Dodd. “It all begins with a story.”

Dodd was attending church one Sunday in his hometown in Connecticut, and saw a toddler in a wheel chair with “serious birth defects.” The child’s mother was struggling to care for her daughter and hold down a job.

“So here’s this woman trying to raise a very sick child, trying to hold down a job, and the conflicts involved. It wasn’t the only thing, but it was a very moving event” that led him to think about a policy that could help workers in similar situations.

Sen. Dodd was one of the law’s architects, working with the National Partnership for Women and Families and the National Women’s Law Center to draft the measure.

Today, Sen. Dodd has a personal connection to the work he started as a young man. The fifth youngest of six, the senator has one brother with Alzheimer’s, one brother with cancer, another brother with diabetes, and a sister who’s blind. “And basically it’s falling to me, their care.”

He’s learned that each situation has different caregiving needs and that often the responsibility to care for a loved one doesn’t end tidily. “And all of sudden you realize these are long term things, this isn’t 10 or 12 weeks,” he said. “These examples are just the beginning of how we deal with all sorts of issues that are emerging.”

Dodd said he is happy to see the focus shift to offering paid leave to caregivers. Eight states and the District of Columbia have laws in place that give workers in the state paid family and medical leave. All are funded through a payroll tax on employees or employers. At least 18 states introduced paid FML legislation in 2019.

State movement on the issue is both a product of inaction by Congress to update the FMLA, and a catalyst for a national debate on how to create a program for every worker, Dodd said.

“One of the motivations that’s occurring in the states that are doing it is they wonder if the federal government will ever get around to doing this,” he said.

On the national level, several proposals have been floated by Democrats and Republicans. Some follow the social insurance model used in state paid family and medical leave programs, while others would allow new parents to access their Social Security benefits early in exchange for delayed or reduced retirement benefits later, or advance portions of their child tax credit.

The latter is the first to come from a bipartisan effort between Sens. Bill Cassidy (R-La.) and Kyrsten Sinema (D-Ariz.). Sen. Cassidy also co-chairs a paid leave working group within the Senate Finance Committee that is meeting regularly.

The working group will consider all the proposals, Cassidy told Bloomberg Law. Any proposal will need Democratic and Republican support to pass, and there will likely be substantial debate over how to pay for the program, and how broadly the leave should apply, he said.

The conversation about paid leave also continues in board rooms across the country. Many businesses are expanding benefits for workers to attract employees in a tight labor market, but many are still resistant to government intervention in what they offer their employees.

Companies want one leave program with which they must comply, because the patchwork of state laws has forced companies to run different leave programs in different locations, and that makes administrating paid leave difficult, Freedman said.

Freedman, who worked with former Republican Sen. Christopher Bond when he was chair of the Senate Small Business Committee, said he sees the FMLA framework as a good starting point for a national paid leave plan.

“Employers have worked with the FMLA for all these years, and a lot of issues with it have been worked out, although there are definitely some pieces that continue to need attention,” he said.

Dodd argued that state programs are too firmly in place to be rolled back in favor of a national plan. And he applauds the progress made so far.

“It’s been beneficial that you’ve had these experiments done in the states,” Dodd said. “All of these decisions demonstrate you can have medical leave and family leave, and it works.”

Today, Dodd serves as the co-chair of the Bipartisan Policy Center’s Task Force on Paid Family Leave. The group, co-chaired by Former Sen. Rick Santorum and former administrator of the U.S. Small Business Administration Maria Contreras-Sweet, is writing a policy roadmap to bridge the divide between what workers and businesses need. 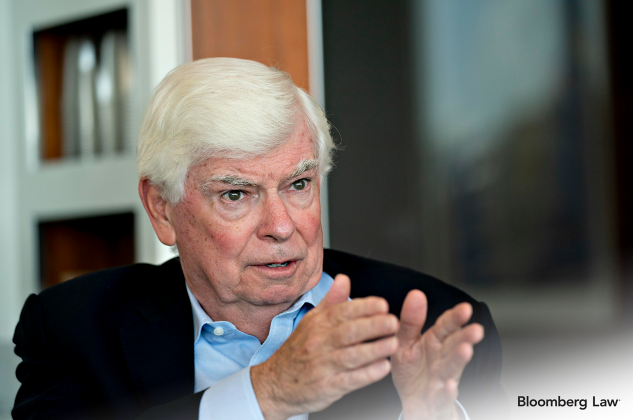 The policy proposal likely won’t be published until after the 2020 election, BPC President Jason Grumet told Bloomberg Law. In the interim, Dodd and his co-chairs are working to provide information and resources to staffers and stakeholders on the Hill and in the states.

One thing Dodd has learned from his career of service is that opportunities for success are fleeting, and lawmakers must take advantage when they present themselves, a lesson he learned from the late Ted Kennedy.

“I asked Ted Kennedy what his biggest regret was, policy-wise, in his career in the Senate. And he said that in 1968 or 1969, Richard Nixon came up with a universal health care proposal. The benefits were weak, but it was universality. And he said, ‘I think about, every day, what a huge mistake I made not accepting Nixon’s proposal, and then building on the benefits package.’”

Moments are important, Dodd said. The window of opportunity to pass a family leave statute opened with President Clinton’s election. The window is opening now for paid leave, he said.

Republicans and Democrats have to work together in the Senate now, Dodd said. “That window can shut down very, very quickly. And when it happens it happens. If you’re seeing it happen, it’s way too late to do anything about it.”

Dodd has also passed on his own legislative lessons to those he’s worked with.

“Above all, what you can’t do, and I’ve learned this directly from Dodd, is you don’t get tired,” DeLauro said. “He introduced the legislation year in, year out, never once gave up on the fact that we were going to continue this effort.”

DeLauro sees the window of opportunity opening, and she’s ready to jump right through. “We are in a much different environment now,” she said, “and it’s an environment in which paid leave is doable.”