More states are passing laws that give organized labor a leg up in the nation’s booming cannabis industry, but there’s a lurking possibility that legal challenges could wipe the spreading pro-union initiatives off the books.

Already this year, New York, New Jersey, and Virginia joined California by enacting recreational cannabis laws that limit the ability of employers to interfere with union campaigns to organize their bud tenders and other marijuana workers. A handful of others are mulling laws to boost unions.

The laws vary but generally require companies to take a hands-off approach to union organizing efforts in exchange for state permission to sell cannabis. That may run afoul of a U.S. Supreme Court ruling that bars state laws from regulating certain elements of labor-management relations in the private sector, labor law observers said.

The legislative push comes as the public warms to reforming cannabis laws. Medical marijuana is now permitted in 35 states, and recreational use is legal in 18 states and Washington, D.C., though legal sales still haven’t begun in some places. South Dakota’s recreational law is paused by a court challenge now before the state supreme court, and the Mississippi Supreme Court is considering the voter-approved medical cannabis law passed last November.

Interstate commerce of cannabis is prohibited because it remains illegal under federal law, noted David Belsky, founder and CEO of FlowerHire, a cannabis recruiting agency. That guarantees every state where cannabis is legal must have its own seed-to-sale industry, protecting job growth from foreign outsourcing and consolidation by major corporations, he said.

Along with the newly passed laws, legislatures in Connecticut, Delaware, Minnesota, Massachusetts, and Rhode Island are considering their own proposals to boost unions in the cannabis industry.

California gave unions advantages in the recreational cannabis industry with its 2019 measure that requires companies to reach “labor peace agreements” with unions as part of the licensing process. The Golden State followed New York’s 2014 law mandating such peace pacts in the medical marijuana industry.

Labor peace pacts generally call on an employer to stay neutral during organizing campaigns conducted by the union that signed the deal, while the union agrees not to disrupt the company’s business.

Cannabis isn’t the first industry to have laws mandating labor peace agreements. As of 2016, municipalities in 11 states, two states, and Washington, D.C., had adopted such measures for other sectors, usually covering hotels, restaurants, casinos, other hospitality facilities, and airports, according to a U.S. Chamber of Commerce report. Conversely, six states blocked local governments from imposing them, the report said.

“A labor peace agreement is not forcing organization,” said Jim Araby, director of strategic campaigns for United Food and Commercial Workers Union Local 5. “It’s really giving workers an opportunity to have a conversation with management without losing their jobs.”

“But this is definitely not a bed of roses,” said Araby, whose union represents 30,000 workers from Monterey County to the Oregon state line and has several unfair labor practice charges pending before the National Labor Relations Board over organizing cannabis workers.

Challenges ‘A Matter of Time’

Lingering in the background are potential legal battles over whether federal law preempts state initiatives to aid unionizing in the cannabis industry, which could invalidate the state measures.

“I have no doubt that would be preempted,” Duff said. “But you need a lawsuit first.”

Thus far, the lack of legal challenges shows that individual cannabis companies are more interested in complying with state requirements that allow them to go into business, instead of launching what could be a protracted legal challenge against those requirements, legal observers said.

Yet as more states adopt labor peace agreement laws, a company or an industry organization may pick up the gauntlet, labor law observers said.

“It could be a matter of time before somebody brings a challenge,” said Christopher Conti, an attorney with management-side firm Fisher Phillips LLP.

The National Right to Work Legal Defense Foundation, a conservative advocacy group, petitioned the NLRB’s legal arm last year to file lawsuits against cannabis labor peace laws in California, New York, and New Jersey—but it hasn’t heard from the agency on the topic since. NLRB spokeswoman Kayla Blado declined to comment on the status of that petition, leaving it unclear whether the agency will take action. 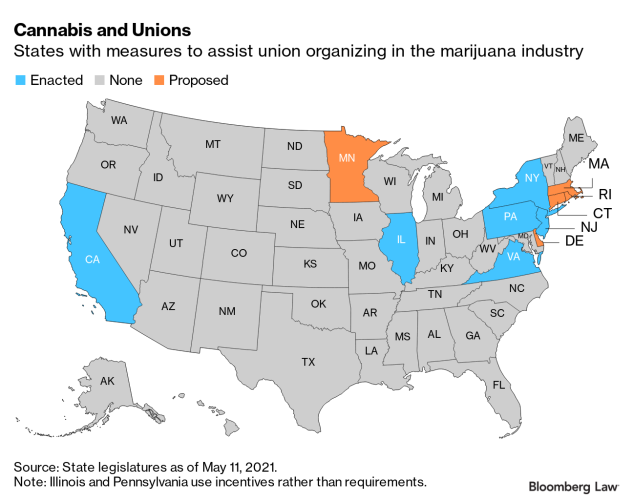 The advantages created by some state laws hasn’t made unionizing cannabis workers a slam dunk.

The laws don’t totally restrict employer efforts to oppose unions, and some measures call on unions to surrender methods for pressuring employers, potentially robbing them of leverage in contract negotiations. The laws also don’t change the fact that some workers are ineligible to unionize under federal law because they’re considered agricultural laborers.

California’s first-ever law sets minimum requirements for peace pacts. An employer must pledge to refrain from interfering with the union’s efforts to communicate and try to organize and represent its workers, while also allowing the union access to its facility to speak with workers.

The union, in turn, must agree not to engage in picketing, work stoppages, boycotts, and any other economic interference with the employer’s business.

“On the one hand, it gives workers the opportunity to bargain collectively, and on the other hand, they are giving up some tools that are important to winning good contracts,” said Ken Jacobs, head of the Labor Center at the University of California-Berkeley.

New York similarly requires unions to surrender the use of such pressure tactics. New Jersey doesn’t set specific parameters for labor peace agreements but does call on companies to “make a good faith effort” to form collective bargaining agreements with unions within 200 days of opening. Virginia will pull a company’s cannabis license if it fails to “stay neutral” in any union organizing efforts, which includes permitting access to workers and voluntarily recognizing unions if they obtain majority support.

Illinois and Pennsylvania, meanwhile, reward companies in the licensing process if they have peace deals with unions, rather than require them.

Some of the state proposals use the labor peace agreement requirement to boost unionizing, including the bills in Connecticut and Delaware, which have won approvals from legislative committees. None of the pending state measures have been set for votes on passage.

Still, even with lawmakers’ assistance, legitimate concerns remain about the potential impact about what power unions may be giving up to get in the employer’s door.

“This is not about striking or organizing. This is about once you organize, the union has lost its bargaining power,” said Kate Bronfenbrenner, director of labor education research at Cornell University. “The right to strike is one of the primary ways to enforce their bargaining power.”

Unions often try to compensate for losing tools such as pickets and boycotts by negotiating for favorable provisions in their labor peace agreements that help them down the road, labor lawyers said. That shows how labor-management negotiations in the cannabis industry can have high stakes even before workers unionize.

The agreements can include clauses requiring what’s known as interest arbitration, which calls for an arbitrator to decide what will go into a labor contract if the parties can’t finalize a deal themselves after a set period of time, attorneys said. The Protecting the Right to Organize Act, a sweeping Democratic proposal to retool federal labor law, calls for interest arbitration to backstop talks for initial collective bargaining agreements.

Jae Chun, a Friedman & Anspach lawyer who represents unions, said he’s won interest arbitration clauses in several labor peace agreements with medical marijuana businesses in New York. Chun said he’s also successfully bargained for card check, a labor-friendly process that requires an employer to voluntarily recognize a union as the workers’ representative if it can show majority support through signed cards instead of votes in a formal election.

“They come to us because they need labor peace agreements,” Chun said of representing unions in negotiations with employers. “At that point, we have a bit more power.”

(Updated with interstate commerce information in 7th paragraph. An earlier version was corrected to reflect that New York was the first state with a law to assist union organizing in the industry. )

To contact the editors responsible for this story: at ttritten@bgov.com; at jcasuga@bloomberglaw.com