President Donald Trump listens during a news conference in the James S. Brady Press Briefing Room at the White House in Washington on Aug. 10, 2020.
Photographer: Stefani Reynolds/CNP/Bloomberg via Getty Images

Federal agencies will have more difficulty opposing some workplace race bias lawsuits if they roll back anti-racism training as contemplated by a recent White House memo, lawyers and law professors said.

The White House Office of Management and Budget issued a memo Sept. 4 condemning racial sensitivity training that involves discussion of topics like white privilege and critical race theory as “counter to the fundamental beliefs for which our Nation has stood since its inception.” It said the training promotes “division and resentment within the Federal workforce.”

President ordered such training to be canceled after learning agencies have spent millions of dollars instructing workers in “divisive, anti-American propaganda,” OMB Director wrote in the memo. Vought also hailed the memo on his Twitter account. 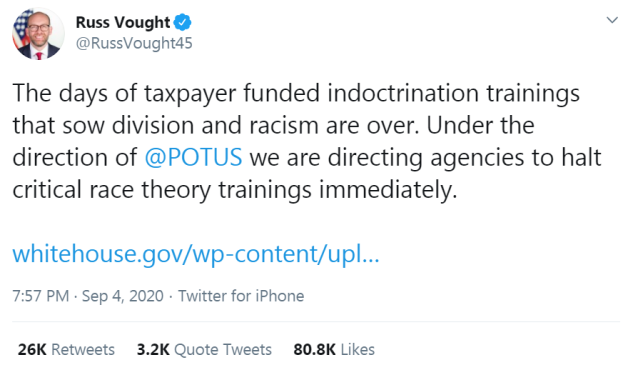 The OMB memo blasting anti-racism training comes as race relations has emerged as a central issue in the 2020 presidential election after months of nationwide protests over racial injustice and police brutality.

Trump has pushed back against critiques of systemic racism. Taking to Twitter on Sept. 5, he characterized critical race theory—which argues legal institutions are inherently racist and views race as a social construct—as “a sickness that cannot be allowed to continue.”

Critical race theory has attracted criticism from the political right. An official at the Heritage Foundation, a conservative think tank with ties to the Trump administration, said in a July essay that the theory “precludes any meaningful conversation about racism and race.” The foundation didn’t respond to a request for comment.

Running Against the Trend

The type of anti-racism training cited in the OMB memo has become commonplace in corporate America, lawyers and law professors said.

The concept of white privilege, which the OMB memo singles out as problematic, is a basic element of most racial sensitivity training programs, said Paulette Brown, an attorney and the chief diversity and inclusion officer at the management-side firm Locke Lord.

Brown and other attorneys who counsel employers on anti-discrimination matters said they’d advise clients to stick with their existing racial sensitivity training programs rather than abandon them over concerns that they sow division.

Rescinding anti-racism training runs counter to the trend among Fortune 500 companies as well as the legal requirements for such training in states like California and New York, attorneys said.

Canceling training can have a direct negative impact on the workplace, said , an attorney at Ogletree Deakins Nash Smoak & Stewart who specializes in employee training.

“Without proper training, workplaces can become fertile ground for conduct that rises to the level of unlawful conduct,” Grider said.

Federal employers that cancel any kind of diversity and inclusion training risk communicating to workers that they won’t fulfill their obligations as equal opportunity employers, she said.

Under the Faragher/Ellerth defense, an employer can avoid liability for harassment that doesn’t involve a termination or other adverse employment action by showing it has an anti-harassment policy and the aggrieved worker didn’t take advantage of it.

In light of that defense, a company without a racial sensitivity training program is committing “HR malpractice,” said Jeffrey Hirsch, an employment law professor at the University of North Carolina.

“That’s going to be hard for government employers to prove if they can’t show that there was training around the policy,” said , an attorney and chief diversity and inclusion officer at Buchanan Ingersoll & Rooney.

One of the first issues raised during depositions of an employer facing harassment claims is its anti-harassment training, to determine how well their workers were educated on the companies’ policies, Brock said.

That decision made clear that employers can dodge those damages if they can show good faith efforts to avoid bias in the workplace, said Seiner, a former EEOC attorney.

The OMB memo said the White House’s budget office will soon issue more detailed guidance in an effort to make sure agencies “cease and desist” from paying for problematic racial sensitivity training.

For the time being, executive branch agencies should identify all spending related to any training involving critical race theory or white privilege, according to the memo. Agencies should also find training that suggests “either (1) that the United States is an inherently racist or evil country or (2) that any race or ethnicity is inherently racist or evil,” the memo said.

In addition, the memo called on agencies to start identifying any legal ways to cancel training contracts and to divert funding away from those programs.

Most scholars of race and the law have their critiques of racial sensitivity training, especially about the tendency of some employers to treat training as a panacea for race-based problems in the workplace, said Ifeoma Ajunwa, a Cornell University law professor who’s written about anti-bias law.

“But anti-racism training is not the problem,” Ajunwa said. “The problem is documented racial disparities in the workplace in terms of pay, advancement opportunities, and hiring.”