California employers would be prohibited from discriminating against workers and job applicants for off-duty cannabis use under legislation that gets a hearing on April 20—coincidentally the date of annual pot-centered celebrations.

Lawmakers are trying to fill in the gaps to protect those who use a substance that 37 states and the District of Columbia have legalized for medical use and 18 states and D.C. have legalized for recreational use, according to the National Organization for the Reform of Marijuana Laws (NORML), which advocates for legalization and decriminalization, and the National Conference of State Legislatures.

California, Colorado, Oregon, and Washington legalized cannabis long before they considered adopting non-discrimination provisions for workers, including those who use weed medicinally, for off-the-job use and detailing when employers can discipline employees or reject potential workers.

“As the laws are being developed now for other states, particularly New England states, you’re actually seeing a more progressive situation where they’re writing more protective provisions” than in California or Colorado, said John E. Thomas, a McGuireWoods associate in Tysons, Va., who represents employers. 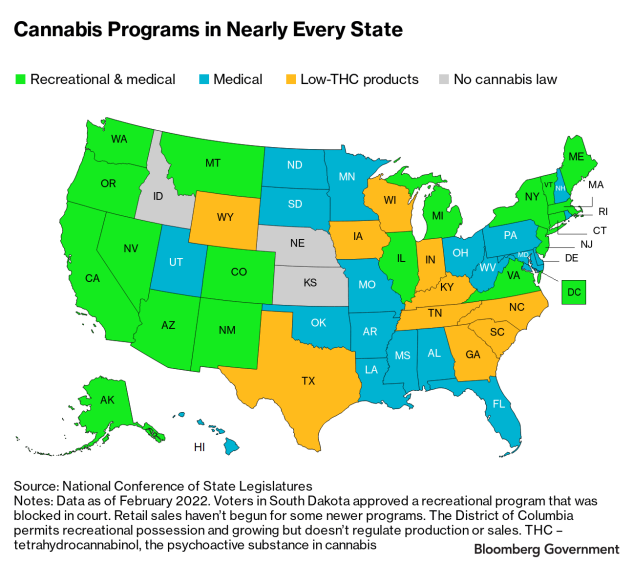 So far, 21 states prohibit discriminating against workers based on medical usage, according to NORML.

Employers, including last year dropped cannabis from their drug-testing panel amid the tight labor market and more states legalizing weed. But that doesn’t mean workers can break out the pre-rolls at lunch.

“Medical marijuana aside, if you’re using it for recreational, that doesn’t mean you’re entitled to come to work high,” said Walter Foster, an employment lawyer with Eckert Seamans Cherin & Mellott LLC in Boston. “It doesn’t mean open the door to...an eight-glass martini lunch or in this case a four-brownie edible lunch.”

A major stumbling block is the dearth of testing to accurately determine impairment, with THC, the fat-loving active ingredient in cannabis, lingering long after the buzz ends. Cannabis is “metabolized quickly, but the body can store THC in fat cells, so that traces of THC can be found up to several weeks after consumption,” according to the Congressional Research Service. Studies “have been unable to consistently correlate levels of marijuana consumption, or THC in a person’s body, and levels of impairment.”

Building and construction trade employees would not be covered by the bill, to be heard in the Assembly Labor and Employment Committee. The measure also wouldn’t preempt state or federal laws requiring employees to be tested for controlled substances.

The California bill is the last one standing this year to make it unlawful to discriminate in hiring, termination, or other conditions of employment based on cannabis use away from the workplace, or if the test finds THC.

The California Supreme Court in a 2008 decision held that an employer doesn’t have to accommodate cannabis use.

“That’s still the law of the land in California but the trend is certainly pointed in the direction of making it more difficult for employers to take adverse actions based on marijuana use,” said Michael Brewer, Baker & McKenzie managing partner of California offices who is the firm’s global employment chair.

Employers are barred from taking adverse action against workers or applicants’ recreational use in Montana, Nevada, New Jersey, and New York. Connecticut employers, starting July 1, can’t ban off-duty use or discipline workers or refuse to hire those who have a positive THC test.

Amazon won dismissal in a proposed class lawsuit in New York when a federal judge ruled that sorter jobs in the company’s Staten Island warehouse can present a safety risk and are exempt from the prohibition.

Drugs tests are now sophisticated enough that “if an employer wanted to test impairment based on THC in the individual fluids, they can,” Brewer said. Still, California “drug testing laws are not exactly easy to comply with.”