Jerry Vazquez paid $5,000 up front for the chance to run his own cleaning business. The appeal of a Jan-Pro International franchise was immediate: “Realize your dream of financial independence.” They’ll find the customers. No experience necessary.

That promise didn’t materialize for him. “I was never an owner. I was never an employee,” Vazquez said. “It was even worse. I was paying for a job.”

He and other janitors challenged the company’s business model in court more than a decade ago, long before the controversy over whether gig workers like those at and should be considered employees. That class action, currently pending at the California Supreme Court, straddles broader questions about worker classification, the franchise industry, and the future of the gig economy.

With a decision expected in 2020, the questions raised in the case dovetail with the modern and entrenched debate: When is a worker an employee deserving of benefits such as health care, overtime, and workers’ compensation protections? The answer is expected to have wide effects on the franchise industry as a whole and on gig economy businesses.

In the class action, workers’ advocates say the business model used by these companies exploits vulnerable workers, essentially requiring them to pay to work and refusing them benefits. Jan-Pro counters that many successful businesses have grown from their model and denies that the company ultimately has the control over the cleaning work in the way a traditional employer would.

Vazquez says he owed $4,000 on top of his initial investment, taken incrementally from each paycheck, along with fees and percentage cuts. He survived for a time on roughly $5 an hour with jobs scraping congealed juice from a child care facility floor, mopping what he called “the dust bomb” from a factory, and cleaning the nooks and crannies of office building cubicles. His 64-year-old mother was his only help. He bought his own supplies.

“I ended up making less than minimum wage,” he said. Vazquez thought he was doing something wrong, until he met with other cleaners who had purchased franchises and had similar struggles, leading to divorces and loss of savings. They joined together and contacted an attorney. “We just want to get justice and change the law. This system hurts families.”

In the Jan-Pro case, the federal U.S. Court of Appeals for the Ninth Circuit found earlier this year that the cleaners should have been employees, not contractors, under a new worker-friendly classification test created by the California Supreme Court in 2018. And now, the state justices are using the case as a vehicle to determine whether the test—which threatens business models that rely on contractors—should apply retroactively.

“The case reaches back and forward,” said Catherine Ruckelshaus, general counsel for the National Employment Law Project, a nonprofit that has filed briefs in cases against cleaning companies’ models. “These workers are just trying to get paid minimum wage and overtime, but it’s a good case to think through these questions in the contractor debate.”

California has been a focus of the worker classification debate. One year after the California high court created what’s known as the “ABC test,” the governor signed a law codifying it, joining several other states that adopted the more rigid test including Massachusetts, New Jersey, and Connecticut. Janitorial companies, including Jan-Pro, JaniKing, and Coverall, were also sued in those states. Coverall stopped operating in Massachusetts after a court ruling in favor of workers. 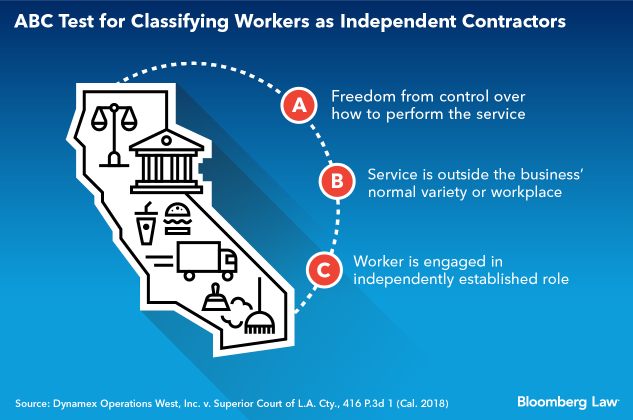 The ABC test replaced a more flexible test and lays out three specific criteria employers must meet in order to classify its workers as contractors: Companies must show A) that the workers have freedom from control over how to perform the services provided; B) that the services are outside the business’s normal variety of work; and C) that the workers are engaged in an independently established role. Previously, the classification test relied on a balance of factors that determined how much control the company had over the task performed.

The Jan-Pro case could answer an unresolved question about the test. Because the workers originally sued the company in 2008, the Ninth Circuit said the test should apply retroactively, which would potentially make franchisers and gig economy companies liable for labor and employment violations going back for years. But then, the Ninth Circuit rescinded its decision about retroactivity and asked the state high court to rule on the issue. That decision is expected next year.

If the California court finds that the rigid ABC test is valid and applies retroactively, companies could face more litigation in California and elsewhere.

Several major business groups have weighed in on the Jan-Pro class action, arguing in friend-of-the-court briefs that there would be “enormous economic consequences” for gig economy companies. The U.S. Chamber of Commerce said the case limits a rapidly growing section of the workforce and would lead to a torrent of class actions against businesses that never would have been previously considered employers.

The new laws and battles over contractor status—sparked by litigation, union-funded research, and public relations campaigns—are “part of an attempt to eradicate the franchise model from existence,” said Matthew Haller with the International Franchise Association.

“The test ignores the practical reality all types of businesses have to live under. You can’t divorce the business model from the statutory framework,” Haller said. “That leads to chaos and confusion and uncertainty.”

Vazquez’s class action argued that cleaners like him were never “owners” of a franchise but rather employees of the larger company.

He says when he purchased the cleaning franchise, he was told he’d make as much as $25 an hour. He envisioned having multiple employees and learning the trade to build a larger business. Instead, full-time work left him with only $1,200 a month. He said he’d be penalized from his paycheck for various violations, such as not wearing the correct uniform or filing reports of all site visits.

“The cleaning franchise companies are particularly predatory. They prey on immigrant workers, in particular,” said Boston-based attorney Shannon Liss-Riordan, who represents Vazquez and the other workers.“They claim to be selling them a chance at the American dream to own their own business.”

Industry analysts note that “non-employers,” those classified as independent contractors and franchises, account for 93 percent of all janitorial service companies, according to a 2014 NELP report. Workers have recovered more than $26 million in unpaid wages from janitorial companies due to misclassification and other labor violations with the help of statewide watchdog the Maintenance Cooperation Trust Fund, according to the University of California at Berkeley Labor Center.

It’s a fake form of franchising, said David Weil, a former Labor Department wage-and-hour chief. During his time in the Obama administration, he targeted classification issues, including against cleaning companies. The Labor Department in a 2018 case against Jani-King didn’t move forward.

“The economics undermine the whole set up and make it difficult for the franchisee to essentially operate like an independent business,” said Weil, current dean of the Heller School for Social Policy and Management at Brandeis University. “That’s why it’s a suspect form of franchising. When it comes down to it, they are nothing but employees. The premise of the business model is so flawed.”

Jan-Pro, which handles commercial cleanings with 10,000 units through the U.S. and Canada, was founded in 1991. The cleaning franchises service car dealerships, gyms, banks, churches, schools, and offices. The company says these janitorial cleaners are “franchise owners, not hourly employees.” Gibson, Dunn & Crutcher and O’Hagan Meyer represent the company in the Vazquez class action.

The attorneys say franchisees may buy a franchise package anywhere from $5,000 to $200,000. Many start at $5,000 worth of accounts and commonly grow to more than $100,000 in annual account revenue, they say. They said the cleaners who buy franchises add employees as their accounts grow. Many of the businesses have been sold or transferred to third parties, as well. More than 75 percent of the franchises are minority-owned and 25 percent of women-owned, they estimate.

Because they set their own hours, choose their own customers, and decide whether to do the work or hire others, the cleaners aren’t in a traditional employment relationship, where employees must do what the company says, said O’Hagan Meyer attorney Jeff Rosin in an email statement.

“The commercial cleaning franchise industry is a growing industry because of the opportunities for persons, partnerships and families to succeed on their own, with the credibility of a nationally regarded brand behind them,” Rosin said.

Rosin acknowledged that like with any business, there are risks. He said some who buy franchises aren’t a “good fit for the business.” He added, “Ultimately, whether franchisees grow and thrive, and how franchisees go about operating their businesses is entirely up to them.”

The company says many workers have found success with the model. About five years ago, Maria Gonzalez, who worked as a receptionist at Jan-Pro at the time, decided to purchase a package with a friend, Juanita Buenrostro, for $6,850. She said it took about a year before she added more employees and the business took off. They both worked two jobs at first, their day jobs and cleaning in the evenings.

Their business, Unique Janitorial, grew to $29,000 a month in accounts from $11,000 at various locations in California. The money helped pay for Buenrostro’s daughters to go to college, and Gonzalez is saving for her 14-year-old son’s tuition, as well. Both have day jobs and their four employees do the cleaning work in the evenings. Buenrostro works in the Jan-Pro office as a manager. Gonzalez also works at a bank.

“It’s one of the best ideas ever,” Buenrostro said. “It helps with the American dream, to own a house or send kids to college.”