California lawmakers are set to soon give final consideration to a bill to block and other companies from penalizing warehouse-distribution workers if they fail to meet production policies because of meal or rest breaks.

The measure (A.B. 701) is up for a vote in the state Senate as the legislature moves to wrap up business before its session ends next week. It was introduced earlier this year to address on-the-job injuries at warehouses.

Labor advocates say accidents are becoming more frequent at warehouses because of what they describe as work quotas set by computer algorithms to maximize worker productivity.

“This is the first time we’re trying to tackle a new work situation” where employers use artificial intelligence to set work procedures, said Assemblymember Lorena Gonzalez (D), the bill’s author. The goal, she said, is to “insert real human beings in the process so workers aren’t being pushed to the point of injury, which they are now.”

The bill would go to the Assembly for a final vote if the state Senate approves it. It’s one of hundreds of bills that are in line to get votes before the legislature’s session ends Sept. 10. Gov. Gavin Newsom (D) must sign or veto all bills passed by the legislature by Oct. 10, regardless of the outcome of the Sept. 14 election to recall him from office.

Gonzalez’s measure would require warehouse employers to disclose production quotas and pace-of-work standards to workers and to state enforcement agencies. It also would bar managers from counting time that employees spend complying with mandatory rest and meal breaks as “time off task,” and require the state Labor Commissioner to enforce the provisions.

Data from the state’s occupational safety regulator, Cal/OSHA, indicates that 6.2 out of every 100 warehouse workers in the state were injured in 2019, a rate on par with that for livestock handlers.

In 2020, the number of workers injured on the job at Amazon warehouses was more than double that, according to a Los Angeles County Federation of Labor-sponsored report. It found 13.11 workers were injured per every 100 individuals, compared to 4 out of every 100 at non-Amazon warehouses.

The report attributed the difference to Amazon’s “high-paced quota system,” which critics say doesn’t allow for proper break time, and policies that require workers to catch up on unfinished tasks outside of normal working hours. 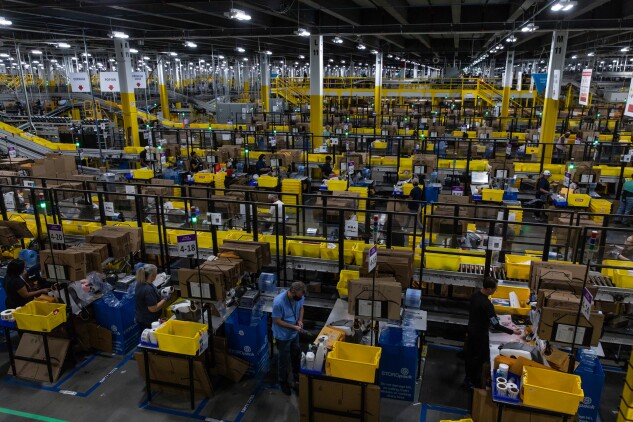 “Ruthless demands are forcing workers to skip bathroom breaks, working every day in fear of losing their job and risking their health and physical well-being, even during the pandemic,” state Sen. David Cortese (D), chair of the Senate Labor, Public Employment, and Retirement Committee, said at a recent news conference.

A coalition of 50 business organizations, including the California Retailers Association, the California Farm Bureau Federation, and several local chambers of commerce, is opposing the bill, which they say would lead to higher costs and shipping delays.

“AB 701 is an overly broad bill that will increase the cost of living for all Californians, kill good-paying jobs and damage our fragile supply chain,” Rachel Michelin, president of the California Retailers Association, said in a statement.

The pandemic has exacerbated worker-safety concerns at Amazon, while the company’s revenue jumped by 38% in 2020, to $381.1 billion.

The legislation would cover warehouses, distribution centers, and fulfillment centers with 100 or more employees, and would apply to major retailers other than Amazon, such as , , and .

If approved, it would also affect smaller companies that may have a harder time complying with its terms, said Alex Polishuk, a management-side attorney with Polsinelli PC. The labor code allows employers to pay employees a premium payment for missed breaks, but it’s unclear if employers could still provide that premium as an option under the bill, Polishuk said.

The bill’s language would mark the first time that bathroom breaks, including the time it takes to travel to and from the bathroom, would be counted as time off that must be considered in setting production policies, Polishuk said. It’s unclear how the state Labor Commissioner would interpret those breaks in the context of existing law, he added.

“Without further explanation and further background as to specifically what’s required of them, it might be a bit difficult for them to meet the requirements,” Polishuk said, referring to small employers.

Amazon declined to immediately comment on the bill. The company in June made changes to its “time off task” policies, which measure how much time employees spend logged on to the software tools in their work area. It now uses averages over a longer period.

“The goal is to re-focus the conversations on instances where there are likely true operational issues to resolve,” an Amazon executive said in the update.

Gonzalez, who authored California’s gig-worker law, A.B. 5, introduced several other employment-related bills that are slated to get votes before the session’s end.

Assemblymembers on Wednesday approved one of the bills (A.B. 286), which would prohibit food-delivery apps from charging more than the price listed on the app’s website. The measure, which would also bar qualifying apps from keeping a portion of tips, had already been approved by the Senate.

Other Gonzalez-written bills include measures to:

Other worker-safety bills slated for a Senate vote by Sept. 10 include measures to:

—With assistance from Joyce E. Cutler

(Updated in paragraphs 12 and 13 with comment from the California Retailers Association. An earlier version was corrected, in paragraph 6, to remove mention of a Cal/OSHA-related provision that had been part of A.B. 701 but was later removed.)