California workers and companies have a new test to determine whether someone should be classified as an employee or independent contractor under state law.

The state supreme court said in an April 30 ruling that a three-factor “ABC” classification is the correct test under state law, shifting from a separate standard that looked at nearly a dozen different factors.

“It’s a bombshell,” Richard Reibstein, a partner at Locke Lord LLP in New York, told Bloomberg Law. “It will require hundreds of thousands of companies in California that lawfully created independent contractor relationships to reevaluate their classifications.”

“Many companies have built their businesses in a manner that conforms to the laws in the states in which they operate, including California, which has so dramatically changed its test that many of these companies today might be misclassifying workers that were lawfully classified yesterday,” said Reibstein, who represents employers and senior management in labor and employment cases.

Case on Track for Trial

The decision affirms a lower court ruling, which upheld a trial judge’s decision to certify a class action filed by drivers for delivery service Dynamex Operations West Inc. Dynamex is a subsidiary of TFI International Inc. Even though the high court’s ruling upheld decisions reached by lower courts, its adoption of the ABC test was a shift in how it interpreted worker classification under state law.

The case now returns to to the trial court, where the judge will decide whether more discovery is needed or if it should be scheduled for trial, Mark Pope, a lawyer for the driver, told Bloomberg Law. There are about 229 class members, he said.

“For employees I think it establishes a bright line test that is going to be beneficial for employees and for employers who want to comply with the law,” Pope said. The new standard puts the responsibility on businesses for proving the three parts of the ABC test, he said. “It’s the employer that has to meet the burden on each of those tests.” 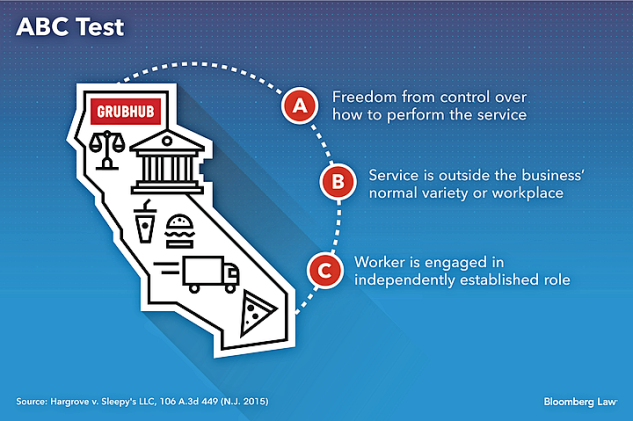 A few weeks before the case was set to be argued, the court asked the parties to address whether it should adopt a classification test like the ABC test the New Jersey Supreme Court adopted in 2015. The test is called ABC because it includes three conditions that must all be satisfied for someone to be considered an independent contractor. If A, B, or C isn’t present, the worker is considered an employee.

The three factors are whether (A) the worker has freedom from control over how to perform the service, (B) the service is outside the business’s normal variety or workplace, and (C) the worker is engaged in an independently established role.

Ruling Could Affect Many Gig Workers

The Dynamex decision could have a large impact in California, home to Silicon Valley. That’s because California also is home to many lawsuits involving the classification of many app-based gig economy workers.

“This is picking up and accelerating a trend toward protecting workers that is essential for the state to do because right now the fed government is adopting a far more employer protective approach,” Rubin said. Rubin filed an amicus brief on behalf of several unions and worker advocacy organizations that argued for the ABC test.

One company that could feel the effects of the Dynamex decision early on is GrubHub Inc.

A lawsuit filed by former GrubHub food delivery driver Raef Lawson was the first gig worker classification case to reach trial and was seen as a bellwether. He lost in February when a judge ruled after a bench trial that the company didn’t exercise sufficient control over him to consider him an employee.

The judge applied the old, multi-part test in deciding in favor of GrubHub. With the close timing of the Dynamex decision, Lawson may have an opportunity to reopen the case to have it evaluated under the new ABC test. Lawson’s attorney, Shannon Liss-Riordan, didn’t immediately respond to a request for comment about their plans.

Robert Hulteng, Dynamex’s lawyer, declined to comment because he wasn’t authorized by his client to do so. A Dynamex spokesman wasn’t able to comment immediately April 30.

(Story has been updated with reporting throughout.)