A flurry of new 401(k) lawsuits challenging companies that offer their workers conservative, low-cost target-date funds has enraged retirement industry insiders who say the complaints mean no retirement plan is safe from litigation.

The class actions are leveled at major companies defaulting employee investments into a suite of index funds that automatically de-risk investments according to a specific target date—usually when investors are expected to retire.

Participants in , , and plans, among others, claim their current or former employers chased low fees by offering BlackRock investments that underperformed compared to similar target-date options. BlackRock isn’t a defendant in any of the suits, however, because it doesn’t act as a fiduciary to any of the plans involved.

The cases stand out amid a decades-long surge in retirement plan litigation that mostly has penalized plans for choosing active investment options charging higher fees than their cheaper, passive index-fund alternatives. The new legal strategy that began to emerge this month argues the opposite, leaving plan sponsors that are held to a strict, fiduciary standard of care wondering what, if any, investment strategy is safe.

“This means nobody’s safe from a fiduciary imprudence case,” said Daniel Aronowitz, principal manager at Euclid Fiduciary Managers. “That can’t be fair. That can’t be right. To the extent there was any legitimacy to saying that active funds have high fees and you should be using index funds, this flips the script and says, ‘OK, you have low fees, but you blew it because you didn’t have the best performance in the market.’”

Plaintiffs in each of the nine lawsuits filed since July 29 allege that the companies failed to prudently evaluate the BlackRock funds, which plan fiduciaries are required to do under the Employee Retirement Income Security Act of 1974 (Pub.L. 105-72).

“Any objective evaluation of the BlackRock TDFs would have resulted in the selection of a more consistent, better performing, and more appropriate TDF suite,” all of the complaints claim.

The BlackRock funds are preset to track market indexes and operate on a “to-retirement” glide path, meaning the funds freeze trading after the target date has been reached because most participants exit the plan when they retire.

The lawsuits compare the BlackRock suite to other fund options that operate on a “through-retirement” glide path that assumes participants will stay in their workplace retirement plans even after they retire. The two strategies are legitimate, Aronowitz said, but they balance stocks and bonds differently, resulting in different returns at different times.

“They’re comparing apples and oranges, and that’s cynical and unfair,” he said. “It’s like saying, if you didn’t win the World Series, you’ve acted imprudently.”

Plans are supposed to choose and monitor investments according to a prudent, well-documented strategy under ERISA, Aronowitz said. Investment performance is supposed to take a back seat to fiduciary process.

“ERISA is not intended to be about hindsight second-guessing or Monday-morning quarterbacking,” he said “It’s supposed ask, ‘Did you make a good decision at the time, did you document the process, and are you monitoring and having a good process?’”

The BlackRock target-date index suite is made up of passively managed index funds that charge lower fees than many market competitors. It was the only index suite to earn a gold-star rating from this year for a highly rated investment management team and above-average strategy.

Companies tend to choose funds like that to keep investment costs low and protect participants from a market downturn, said Chantel Sheaks, vice president of retirement policy at the US Chamber of Commerce.

Until recently, it also was an effective strategy to hedge against litigation, too. Since 2020, plaintiffs have filed more than 180 lawsuits in more than half of US federal district courts challenging retirement plan operation and alleging plans have failed to rein in administrative fees.

Miller Shah LLP, the lead plaintiff in five of the recent lawsuits over the BlackRock funds, filed a similar slate of claims against companies using Fidelity Investments Inc. index funds in 2020, alleging the companies had sacrificed fees for investment returns. But in its latest filings, the firm and others argue that defendants “chased the low fees” BlackRock’s funds offer “as is currently in vogue.” 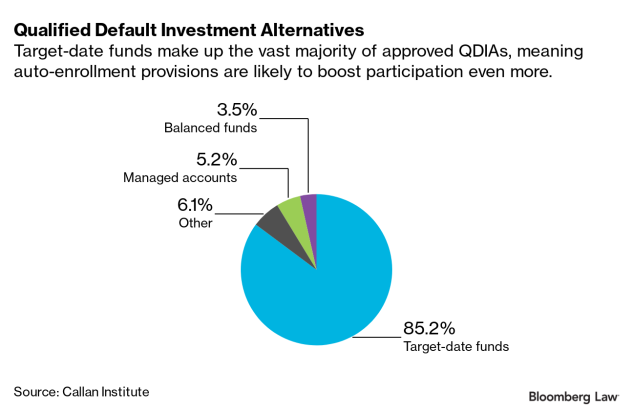 Set It and Forget It

Target-date funds are a popular default investment choice for 401(k) plans that automatically enroll new hires into the plan, but the “set-it-and-forget-it” approach to retirement savings has begun to raise eyebrows.

Target-date mutual funds comprise about a third of total US retirement savings—about $1.8 trillion. Nearly 98% of 401(k) plans offer their participants those kinds of investments, according to a report by The Vanguard Group Inc.

“The differences between to- and through-retirement glide paths are distinctions without a difference,” Surz said. “There’s no difference when financial managers make money off of the risk.”

“Unfortunately, the assertion by defense counsel that the distinction between a ‘to’ fund and a ‘through’ target date fund provides a basis for a defense in the case of the Blackrock funds at issue appears to reflect a fundamental misunderstanding of how these Blackrock funds are actually designed from an investment perspective,” James Miller, managing partner at Miller Shah, said in an emailed statement.