A pumpjack operates above an oil well at night in the Bakken Formation on the outskirts of Williston, N.D., on March 8, 2018.
Photographer: Daniel Acker/Bloomberg via Getty Images

A petroleum industry front group that bought advertisements criticizing fuel efficiency standards has been claiming affiliations with various unions and other organizations that some disavow.

Energy4US is made up of labor groups, businesses, consumers, and workers “united in the belief that energy empowers us all,” according to its website. The group’s existence is limited to a website, Facebook page, and Twitter account, according to Bloomberg Law’s search of public corporate and lobbying records and a ProPublica report.

“I know for a fact that we’re not affiliated with them in any way,” John Gibson, secretary-treasurer of Teamsters Local 639, told Bloomberg Law. Local 639 represents employees of Washington, D.C.'s public schools and public works departments; transportation workers at the George Washington University; and the District’s public transit police force. “We would definitely not partner with someone that’s so anti-regulatory,” Gibson said. Local 639 remains listed as a coalition member.

Energy4US’ Facebook posts and ads include one with a picture of former President that asked “Would you buy a used car from this man?” The ad criticized the administration’s proposals for requiring better gas mileage for vehicles and various local “carbon taxes.” It has since been deleted but remains on Facebook’s ad archive. 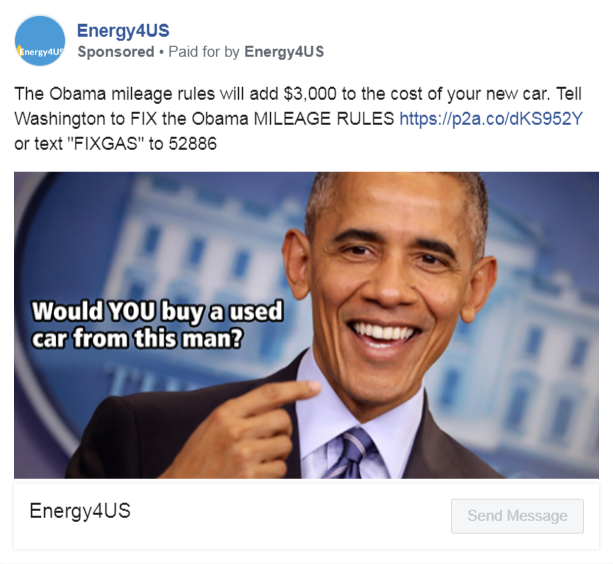 Another ad, which appears to have nothing to do with energy issues, targets , who has allied with unions in the past, suggesting the New York governor is a threat to public employees’ pensions. A number of unions and other entities listed on Energy4US website, including the Philadelphia Sheriff’s Office, are now disclaiming any affiliation with the group.

Energy4US is linked to the American Fuel & Petrochemical Manufacturers trade group which represents almost all major U.S. manufacturers of gasoline, diesel, and other fuels, including and . The ads were viewed between 361,000 and 1.1 million times, according to Facebook’s Ad Archive.

The practice of masking the identity of sponsors of a political message is typical of “astroturfing,” Edward Walker, a UCLA sociologist who studies corporations’ political activities, told Bloomberg Law. He studies the concept in his book “Grassroots for Hire.”

The lack of transparency around Energy4US fits a broader pattern of industry operatives creating front groups that look like grass-roots movements, Walker said.

According to the petroleum group, Energy4US’ coalition includes “25 labor groups and over 20 organizations.”

Some of the unions told Bloomberg Law they aren’t and weren’t ever coalition members; others say they were unaware of and don’t support the group’s advertising activities.

“One of the things that companies and industries go for in these kinds of campaigns is really trying to signal a broad and diverse coalition,” Walker said. “Because it looks a lot more impressive if it’s not just your garden-variety energy interests doing what they do.” 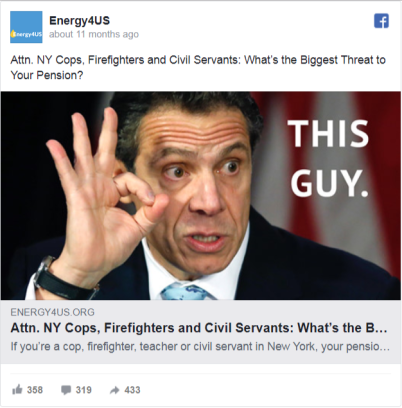 Mike Collins and Theresa Woods, two public relations professionals, apparently run Energy4US’ website and advertising. According to his website, Collins was deputy communications director of the National Republican Congressional Committee and was head writer for the 2012 Republican National Convention Committee on Arrangements.

The two didn’t respond to requests for comment, and emails sent to Energy4US’ listed address went unanswered. But AFPM acknowledged its leadership of Energy4US’ coalition and involvement in the secretive advertising campaign.

We “lead and join coalitions like Energy4US,” which includes organizations that “rely on affordable access to our products,” AFPM told Bloomberg Law in an email.

The ads “were reviewed and approved by Facebook” and “provided a clear pathway for thousands of Americans to voice their opinions,” AFPM said.

A Facebook spokesperson told Bloomberg Law that political ad transparency presents a “challenge” for media companies, and said its safeguards go beyond most others.

Gibson told Bloomberg Law a questionnaire related to Energy4US may have come up during a meeting with other unions.

“That may have been exactly the extent of any communications we’ve had,” he said. Local 639 is “about clean fuel” but sometimes has to take jobs for members that come with “strings attached,” Gibson said.

Those comments seem to speak to a dynamic that sheds light on other unions’ reluctance to discuss the partnerships.

Most unions are historically associated with Democrats and liberal politics, but many—especially in construction—are increasingly associating with Republicans and business groups where they see opportunities for more work for their members.

Michael Sabitoni, a second-generation union leader, is business manager for LIUNA Local 271, a union that represents energy and construction laborers in Rhode island.

Its members’ work includes jobs on “power plants” and building “oil and gas pipelines,” according to the union’s website. Sabitoni is also president of the Rhode Island Building and Construction Trades Council, a “labor/management partnership.”

“We’re strange bedfellows,” Sabitoni said. The contractors and their trade associations know that “while I’m supporting their efforts” at building pipelines and other energy-production projects, “I’m also supporting the efforts to move away from that” to renewable energy.

“They employ a considerable amount of our members, so while we don’t agree with them on everything, we do partner up when we have commonalities of interest,” Sabitoni said.

Energy4US appears not to have purchased new Facebook ads after Oct. 8 and has deleted some posts, although it continues publishing on its page. Sabitoni said he hasn’t been in touch with the group for some time. He said Energy4US is typically active during legislative sessions, and that he anticipates a conference call in January.

“If they’re using this particular alliance for things other than what we’ve signed up for, then they’ll hear from me,” the labor leader said.