President multi-pronged campaign to boost Covid-19 vaccination rates among workers has run into a red wall of Republican-appointed judges, particularly those jurists tapped by the Trump administration.

Twelve of the 14 lower court rulings against Biden’s suite of workplace vaccine rules were handed down by either Republican-appointed district judges or GOP-controlled appellate court panels, according to a Bloomberg Law review of cases. Trump judges were involved in nine of those 12 decisions.

Republican-appointed jurists were responsible for three of the seven rulings supporting Biden vaccine rules, with one decision coming from a Trump judge.

“The judicial responses reflect the fact that these are hotly contested cases on a partisan issue,” said Tom Clark, a political scientist at Emory University who focuses on judicial politics. “Trump judges are likely to be far more partisan.”

The short-term effect of that GOP resistance has been delayed and suspended federal vaccine rules even as the coronavirus infections have skyrocketed since the spread of the more contagious omicron variant. More than 870,000 people have died from Covid-19 in the U.S., according to the Bloomberg Covid-19 Tracker.

Ultimately, the federal government’s ability to set national standards on workplace vaccination will depend on court review. The fewer national rules on Covid-19 jabs that survive legal challenge could mean a more varied patchwork of state-by-state regulations consistent with familiar red-blue differences.

The cases also deal directly with the federal government’s power, providing an opportunity for rulings that shrink that authority in areas beyond just workplace vaccine policies, scholars said.

Litigation over federal vaccine initiatives will most likely percolate through the lower courts and reach the Supreme Court, which is dominated by GOP-appointed justices. The high court has already killed the shot-or-test regulation while allowing the health-care worker mandate to take effect.

The legal battle over the inoculation requirement for federal contractors—which would apply to about a quarter of the U.S. workforce—appears likely to be the next Biden vaccine initiative headed to the Supreme Court. Four federal appeals courts are hearing challenges to that mandate.

Lawsuits against mandates issued by governments and employers began during the first half of 2021, focusing mainly on vaccines’ authorization as an emergency product. Workers said federal drug approval law refers to such products as “unapproved,” and gives individuals the option to refuse them.

Litigation expanded in the fall as inoculation mandates in the workplace proliferated.

In stark contrast to federal shot regulations, workplace vaccination requirements imposed by public employers, private companies, cities, and states have largely withstood legal challenges. District and circuit courts have issued 31 decisions denying requests to halt those types of mandates or throwing out lawsuits against them, compared to five rulings that granted stay orders or revived challenges.

Federal vaccine mandates and the Occupational Safety and Health Administration’s shot-or-test rule have fared far worse, with seven lower court decisions in their favor compared to 14 against them. 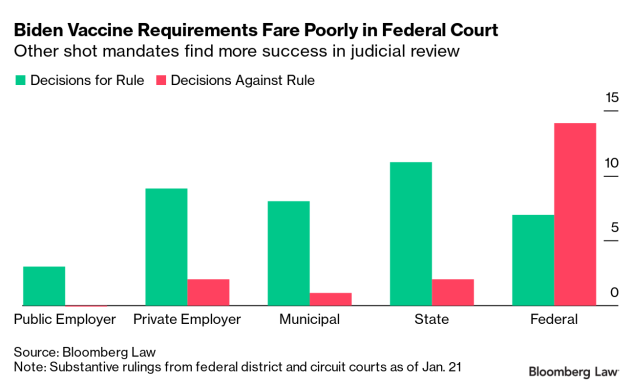 Pushing Beyond the Norm

“But some of the decisions on federal mandates are openly flouting well-established jurisprudence,” said Dorit Reiss, a law professor at the University of California Hastings College of the Law who specializes in vaccine policy.

For example, it’s not new for federal governments to put conditions that health-care facilities must comply with to receive Medicare and Medicaid funds, Reiss said. And the Biden administration didn’t use that authority in a novel way by requiring workers at those facilities to get vaccinated, she said.

Yet five rulings—including three from Republican-appointed district judges and one from a GOP-majority appellate court panel—blocked the health-care rule, which the Supreme Court permitted to take effect earlier this month.

GOP-appointed judges’ aversion to federal vaccine regulations also shows that some on the bench have experienced a similar merger of partisanship, ideology, and identity as has happened in other areas of U.S. political life, scholars said.

Some of the decisions against jab mandates feature aggressively ideological and political language that breaks from the traditional style of judicial writing, which is typically staid, careful, and often boring, said Wendy Parmet, a law professor who directs Northeastern University’s Center for Health Policy and Law.

“Now we’ve got judges starting opinions by quoting Ronald Reagan and judges talking about the persecution of Christians in the Roman Empire,” Parmet said. “Some of them read more like op-eds.” 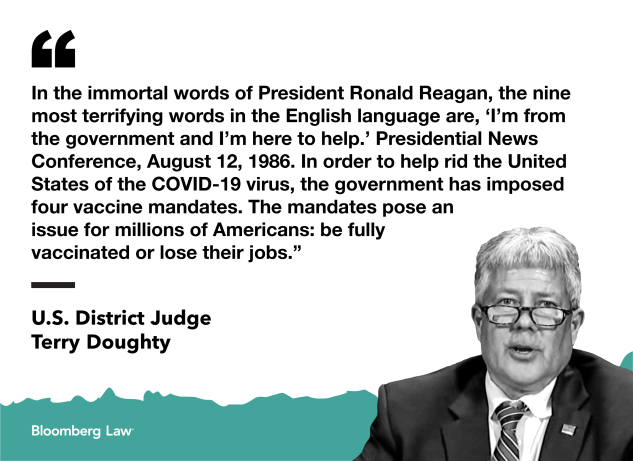 “We’re putting our heads in the sand if we ignore the way partisanship has come to impact how judges see issues,” Parmet said.

Research on judicial decision-making has consistently shown that partisanship can predict outcomes for rulings on issues like abortion and criminal procedure, but a broader public health issue like federal vaccine policy during a pandemic has not been on that list, said Benjamin Barton, a law professor at the University of Tennessee who studies the judiciary.

Barton said it’s surprising to see that public health issue getting partisan treatment from federal judges, but added it’s not unimaginable given how the pandemic has been politicized.

The decisions on federal vaccine rules have gone beyond partisanship, said Lindsay Wiley, a public health law professor at UCLA.

“For some judges—including Supreme Court justices—these are providing an opportunity to advance a broader ideological agenda that’s not about vaccines or even public health,” she said.

Cases on the federal vaccine rule provide political cover for judges to pare back the power of the administrative state, Wiley said. Because of the intuitive sense that many in the general public have about mandates going too far, judges can change precedent in a context in which the public wouldn’t be shocked, she said.

The Supreme Court made a broader change to the law that goes beyond vaccine policy with its ruling rejecting Biden’s shot-or-test rule for large employers. The decision relied on an expanded version of a relatively new judicial doctrine that’s been used to limit what federal agencies can regulate.