President-elect has stocked his transition team with policy experts, academics and former Obama administration officials, a contrast with the industry-friendly figures President sent into the government upon winning office.

The roughly 500-person group Biden’s campaign announced on Monday will prepare federal agencies for the incoming administration and draft plans to overhaul their operations after four years under Trump. The president-elect’s team includes people who favor stronger government regulation than Trump -- particularly for the financial and energy sectors -- and greater consumer protections.

Four years ago, Trump stocked his so-called agency “landing teams” with conservatives from think tanks and advocacy groups -- including people who had been openly hostile to the agencies they were charged to review. It foreshadowed an aggressive rollback of regulations under Trump’s watch.

Biden has taken a notably different tack with what he calls “agency review teams,” though some liberals have raised concerns about the participation of executives from companies, including , , and

The groups of advisers that enter federal agencies ahead of Inauguration Day are a hallmark of presidential transitions, but their influence only goes so far. After the 2016 transition, some Trump “landing team” officials later complained their policy recommendations were ignored.

And in Biden’s case, they may not have much time to work. They cannot access office space or begin closely working with government officials until the administrator of the General Services Administration, , issues a finding that Biden is the incoming president. She has so far declined to do so as Trump fights the election results in several states and insists, falsely, that he won.

Biden says that won’t prevent his transition officials from beginning their planning. 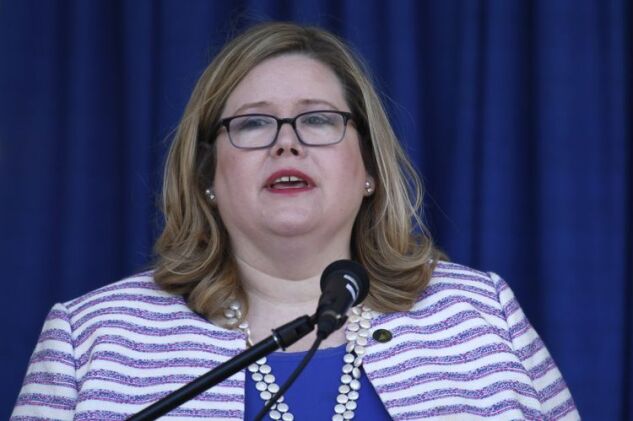 The General Services Administration’s Emily Murphy has so far declined to issue a finding that Joe Biden is the incoming president.
Photographer: Susan Walsh/AP Photo

Biden’s energy- and environment-focused transition teams feature a host of former Obama administration officials as well as some activists from advocacy groups.

The president-elect’s landing team draws heavily from veterans who served under former President , including former chief of staff Matt Fritz and enforcement head , climate adviser and former top water official . The head of the EPA team is Patrice Simms, a former agency lawyer who now serves as a vice president of Earthjustice, a group known for challenging federal environmental policy decisions.

By contrast, Trump’s EPA transition team was led by the ’s , who accused the agency of relying on “junk science” to justify regulations, is skeptical of humanity’s contribution to climate change and sought a major reduction in agency staffing. Another adviser on Trump’s EPA team, , had spent years relentlessly seeking agency emails, texts and other documents, even unearthing former administrator ’s reliance on an alias account.

, a Stanford University professor who was Obama’s founding director of the Advanced Research Projects Agency-Energy, is leading Biden’s Energy Department transition team. During his time in government, the agency funded experimental research projects on flying wind turbines and enzyme-based carbon capture technology. Majumdar is on the short list to be Biden’s Energy secretary, according to two people familiar with the matter.

The head of Trump’s team was , president of the non-profit , which has combatted government efforts to subsidize clean energy.

Shortly after they arrived at the Energy Department in 2016, Trump’s advisers delivered a lengthy questionnaire to Obama officials, seeking to root out the names of employees and contractors involved in climate policy and negotiations. The effort unsettled agency staff, and Democrats cast it as a witch hunt.

Biden’s Energy landing team also includes Brad Markell, a top AFL-CIO official who was involved in auto industry bargaining talks and negotiations over tailpipe emissions standards during the Obama administration. Maggie Thomas, who advised Democrats and on climate policy during their presidential campaigns, is also set to shape policy on Biden’s review team.

Biden pleased progressives this week by naming a slate of people to review U.S. financial watchdogs who’ve been critical of Wall Street, a stark contrast to the industry insiders and anti-regulation policy experts who populated Trump’s transition.

Among Biden advisers who will play a key role in picking leaders for agencies such as the Securities and Exchange Commission is , a former chairman who emerged as a bane of banks’ swaps trading desks after the 2008 financial crisis.

“The Treasury and financial regulatory landing teams seem to show an appreciation for the critique of Wall Street that the progressives have been trying to get across for several years,” said Jeff Hauser of the left-leaning in Washington.

Trump’s landing teams at the financial regulatory agencies included , a securities and white-collar defense lawyer, and , a former Republican SEC commissioner known for his free-market views.

Among those examining the Treasury Department for Biden is , a University of Michigan law professor who was one of the main authors of the Dodd-Frank Act when he worked at Treasury during the Obama administration. Biden’s Treasury team is led by , a former Obama administration official, who was head of corporate responsibility at until he joined the campaign in September.

Also on Biden’s team is President , whose Washington trade group advocates for tougher rules and penalties for financial firms. Last month, Kelleher called a “recidivist lawbreaker” as it prepared to pay more than $2 billion to settle U.S. allegations that it helped facilitate a Malaysian bribery scheme.

Progressives, however, have raised concerns about Biden’s team for the Office of Management and Budget, which includes of Lyft, Mark Schwartz of Amazon Web Services and Airbnb’s Divya Kumaraiah. OMB houses an office which reviews regulations across the federal government, and they fear Biden’s appointments telegraph a light regulatory touch for tech giants.

Liberal activists are also wary of Bridget Dooling’s addition to the budget team. Dooling is a professor at George Washington University’s Regulatory Studies Center, which favors expanding the use of cost-benefit analysis in regulation -- an approach that could curtail ambitious approaches to rule-writing.

Meanwhile, the Biden transition team for the signals another departure from Trump’s deregulation push, which froze or curbed numerous safety and consumer measures.

Voters in cities powered Biden to victory, and he rewarded them by stocking his transition team with transit veterans and labor leaders. The Transportation Department review team is led by , CEO of the . Biden’s DOT team also includes leaders of transit and transportation planning agencies in New York, Washington, D.C., and the San Francisco Bay area. Another member is , commissioner of the , who has been mentioned as a possible Transportation secretary in the Biden administration.

Biden’s team is peppered with figures from organized labor, which played a role in delivering critical swing states like Pennsylvania, Michigan and Wisconsin. They include representatives of the Teamsters, United Association of Plumbers and Pipefitters and the Transport Workers Union.

Trump’s team for the Pentagon included former executives at defense contractors , and , as well as several retired Army officials. Trump’s presidency was marked by a steady increase in defense spending, which the president frequently touted on the campaign trail.

Biden’s team includes several Obama veterans who served in national security posts before decamping to left-leaning think tanks, like Center for a New American Security and New America, as well as RAND Corp. , a former defense official under Obama now at the Center for Strategic and International Studies, is the team leader.

Women make up more than half of Biden’s Pentagon team, whereas there was only one woman among Trump’s Defense Department transition advisers.