has a lot of plans for his first day as president, and some of it can actually happen in a single day -- a fair amount of which he can set in motion right away even though Democrats have so far fallen short of capturing the Senate.

Biden has promised to rejoin the Paris climate agreement, reverse President ’s rollbacks of public health and environmental rules and call allies worldwide to reassure them, all on his first day in the White House. Before that day is done, he says he will put in place a national strategy for containing the coronavirus pandemic, rejoin the , end the ban on immigration from several predominantly Muslim nations and expand rights for Latin American asylum seekers. 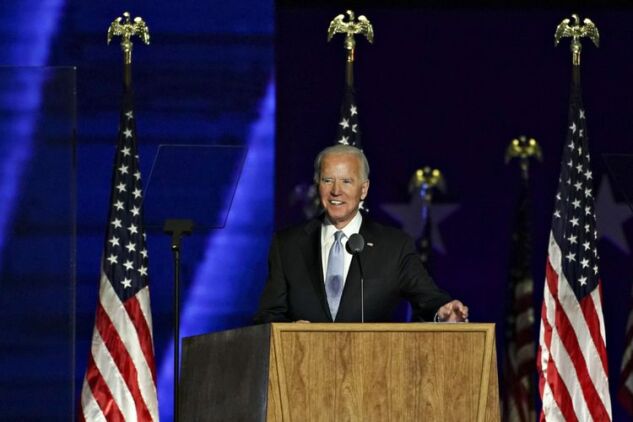 Joe Biden delivers an address to the nation on Saturday.
Photographer: Sarah Silbiger/Bloomberg

While some of those plans can be carried out on Day One, several other moves will run into familiar obstacles in the regulatory process that could drag out completion for months. And some of the items require congressional action, which can’t happen in a day and will grow increasingly unlikely if Republicans maintain control of the Senate as appears likely.

Control of the Senate hinges on a pair of run-off elections in Georgia in January.

“Announcements and executive orders that don’t require acts of Congress, sending positive messages to foreign leaders and government employees, those are easy to do and he can do them on Day One,” said , a Democratic consultant and longtime adviser to California Senator . “But the biggest thing he can do is to immediately change the tone: This is not going to be about Twitter storms or outlandish ideas, but being very focused on practical things.”

Here’s a look at Biden’s plans for his first day in office and how they may impact his presidency and the country over time:

The Covid-19 pandemic may intensify between now and his inauguration, so Biden will have to be ready to address a fluid situation immediately, said , a former top health adviser to the Obama administration.

“A lot is going to depend on how we’re doing,” Emanuel said. “Most of us, the physicians, public-health community, fear that we’re going to have outbreaks in large numbers because of people going inside.”

Biden’s early moves will be important, including his picks for who will run his administration’s coronavirus response. That might take the form of a single “czar” in charge -- Biden adviser played that role in the Obama White House during the Ebola crisis -- or a broader committee.

Biden will have to make the case to a divided country that safety measures people take can set the stage for a broader recovery -- for instance by urging universal use of face masks. The message is “short-term pain for long-term gain,” Emanuel said. Like others in this article, Emanuel was interviewed before the outcome was known.

Biden is set to immediately re-enroll the U.S. in the Paris agreement, the landmark 2015 climate accord under which nearly 200 countries pledged to curb greenhouse gas emissions. Trump jettisoned the agreement with the stroke of a pen last year -- issuing a notification to the United Nations of U.S. withdrawal that took effect Wednesday.

It’s even easier for newly elected Biden to rejoin the pact. After notifying the of an intent to return, the U.S. would become an active member again in just 30 days. Biden could renew the earlier U.S. commitment to cut greenhouse gas emissions by at least 26% below 2005 levels by 2025 or immediately make good on his promise to “go much further than that.”

Most of that work would fall to federal agencies and could play out in formal rulemaking efforts over months, though Biden could issue directives kick-starting some of it his first day in office. For instance, he could direct the and Transportation Department to immediately begin reconsidering a Trump rule that eased fuel-economy and tailpipe greenhouse gas emissions limits for automobiles.

Biden has said he’s “not a fan” of adding seats to the Supreme Court, something activists are urging to counter the rushed Republican confirmation of Justice and the resulting 6-3 conservative majority. But Biden says he would set up a bipartisan commission to consider reforms to the court system and report back to him within 180 days.

On cases before the court, Biden could move to drop appeals filed by the Trump administration and scuttle two Mexican border cases the court is planning to hear.

One centers on Trump’s use of a national-emergency declaration to spend $2.5 billion to build sections of his border wall using money appropriated for other purposes. The other concerns a Trump policy that has forced tens of thousands of asylum-seekers to stay in Mexico while their asylum applications are being processed.

Under the court’s normal scheduling practices, arguments would be in late February or early March, giving a Biden administration a month to scrap the policies. The cleanest approach would be to reach settlements with the , which is suing the government in both cases.

A new Biden administration could easily make the asylum-seeker case go away, said , a University of Texas law professor whose specialties include federal courts and constitutional law. “And could probably dispose of the border-wall dispute as well, if it were so inclined,” he said.

With a compliant enough Congress, Biden could also move to ensure the Supreme Court doesn’t throw out the Affordable Care Act, also known as Obamacare, as it will consider doing in a case set for argument Nov 10.

“Protecting the Affordable Care Act would require a one-sentence bill, and that bill could fix the purported problem in any one of a number of different ways,” said Nicholas Bagley, a health-law law who teaches at the .

A Biden administration is expected to quickly reverse much of Trump’s “America First” approach to foreign affairs, breathing new life into multilateral institutions such as the North Atlantic Treaty Organization, the UN, and the . Biden has pledged to restore U.S. leadership and to work with allies on everything from nuclear proliferation to trade to global health.

“We need a leader who will be ready on Day One to pick up the pieces of Donald Trump’s broken foreign policy and repair the damage he has caused around the world,” Biden tweeted earlier this year.

A Biden victory will come as a relief for European leaders, who were increasingly concerned that the alliance might not survive a second Trump term. Biden, who during his nearly five decades in government has served as chairman of the Senate Foreign Relations Committee and as vice president, has vowed to restore American support for the postwar order.

“Day One, if I win, I’m going to be on the phone with our NATO allies saying, ‘We’re back,’” Biden said in a July Arizona TV interview.

Biden has said he would end Trump’s ban on immigration to the U.S. from seven predominantly Muslim nations on his first day. He has said he would also undo Trump’s executive orders that eliminated “Obama-Biden enforcement priorities on national security and public safety.”

Most of these priorities could be handled through executive orders, so could be done on Biden’s first day in office or very early in his presidency.

Biden has also promised to send a bill to Congress creating a clear road map to citizenship for so-called Dreamers, allowing those brought to the U.S. without documentation as children to remain in the country and receive work permits.

The Biden campaign also announced that he would create a task force on his first day that would work to reunite the migrant children that the Trump administration separated from their parents at the U.S.-Mexican border.

The administration didn’t keep careful track of where the parents went after separation and now the parents of 545 of the children cannot be located.