President-elect will ask Congress for $1.9 trillion to fund immediate relief for the pandemic-wracked U.S. economy, a package that risks swift Republican opposition over big-ticket spending on Democratic priorities including aid to state and local governments.

“We have to act and we have to act now,” Biden said Thursday night in Wilmington, Delaware. He said he would lay out a second, broader economic recovery plan next month at a joint session of Congress next month. That initiative will include money for longer-term development goals such as infrastructure and climate change, the transition team said. 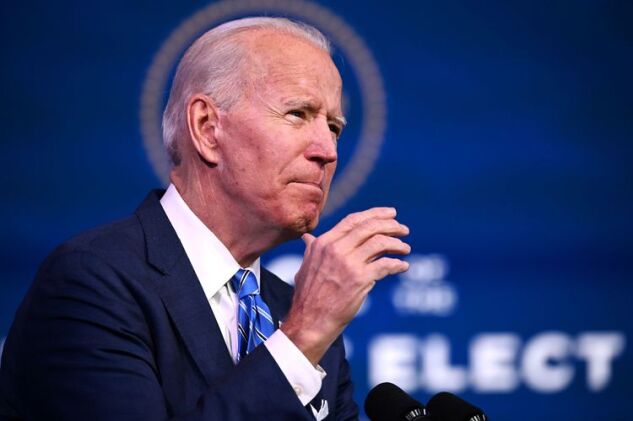 The pandemic aid bill -- spanning $400 billion for Covid-19 management, more than $1 trillion in direct relief spending and $440 billion for communities and businesses -- comes in at more than double the bipartisan bill approved last month, and only slightly below the March 2020 Cares Act. The bigger size, and inclusion of Democratic priorities such as a minimum-wage increase, sets a challenge for Biden to bring Republicans aboard. 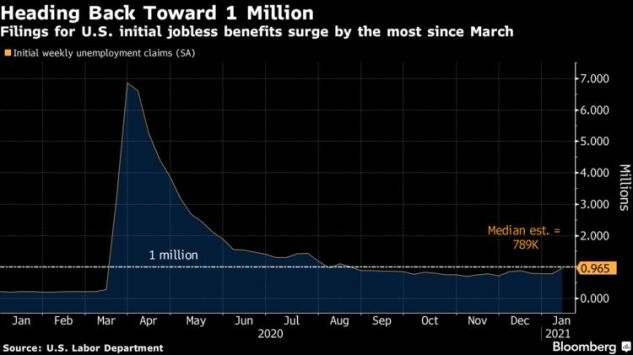 Some measures, including aid to states and money for health care, are likely to need 60 votes in the Senate, which will have a 50-50 partisan split, with Vice President ’s vote conferring control to Democrats. Jobless benefits, stimulus payments and possibly the minimum wage hike, could go through with a simple majority under a special budget tool.

The risk of doing too little is far greater than going too big, a Biden official said. The incoming president last week highlighted that historically low interest rates offer space for the U.S. to use deficit spending to strengthen the economy now.

U.S. stocks climbed to record highs this month on expectations of another major stimulus bill in the wake of Georgia runoff elections that will give the Democrats Senate control. Speculation the package would prove bigger than economists initially forecast have also boosted Treasury yields.

Stock futures late Thursday after Biden gave a reminder that he’s looking to raise some taxes.

“Where we are making permanent investments, as I said on the campaign, we will pay for them by making sure that everyone pays their fair share in taxes,” he said. “We can do it without punishing anyone by closing tax loopholes for companies that ship American jobs overseas or that allow American companies to pay zero in federal income taxes.”

House Speaker and incoming Senate Majority Leader applauded Biden’s plan in a statement Thursday. They pledged to work quickly to put “Biden’s vision into legislation that will pass both chambers and be signed into law.” They also said they hoped for GOP support.

While the Biden team had telegraphed in recent days it wanted to forgo using so-called reconciliation -- the budget maneuver that allows a party to pass a bill with a simple majority of votes in the Senate, rather than the 60 normally needed to cut off debate and move to a vote -- the bigger size may make that harder.

Some aspects of the proposal -- like stimulus checks, expanded unemployment benefits and the minimum-wage increase -- can be done under the special budget tool, while most experts say others like health, education and local government aid wouldn’t qualify for a simple-majority vote.

The rescue plan includes $350 billion for state and local governments, more than double the $160 billion that a number of GOP members had backed late last year in a bipartisan compromise proposal. That’s still less than the nearly half-trillion dollars that Pelosi and fellow Democrats had in their plan.

Biden officials said Thursday that the stimulus plan reflects input from members of Congress, as well as from governors and mayors that his team consulted in the past weeks.

Among the elements in the Biden proposal:

The sense of urgency about further economic support was showcased Thursday morning, with a report showing that weekly jobless claims surged the most since last March. Some 965,000 Americans filed for state benefits, a figure far exceeding the worst days of the 2007-09 recession.

Sinking incomes and continued damage to the labor market, coupled with the ongoing spread of the coronavirus and slow pace of vaccinations, add to the long list of crises the incoming administration will inherit when Biden takes office on Jan. 20.

Biden is set to speak further on Friday about his coronavirus containment plans.

Congressional lawmakers also must contend with a second impeachment trial for President , which will eat up the attention and time of senators as Biden seeks to pass his first major legislative package. Many Democratic operatives and lawyers have spent the past week building support and charting out a strategy for impeachment instead of focusing solely on the billions of dollars at stake with this Covid-19 package.

Democrats say they want to try to pass a package by mid-March when the special unemployment benefits expire.

Biden’s plans will “reflect the urgency of the economic situation that our country finds itself in and the need for action -- urgent action,” Biden’s National Economic Council Director said in an interview. “We need to focus on unity, even in a moment that is challenging and difficult as this one.”

(Updates with more detail on reconciliation, in fourth paragraph.)