Biden administration plans to create a high-skilled, diverse workforce to complete the billions of dollars of infrastructure projects expected over the next decade has largely hinged on siphoning federal dollars toward contractors and grant applicants that partner with labor organizations.

But the administration also will need buy-in from businesses and Republican-led states, which say some of the steps President has taken actually could limit access for women- and minority-owned businesses.

The idea is that if the federal government encourages job training programs in certain industries such as electric vehicle production—and aims the opportunities at communities and groups that typically have been left out of the largely White, male-dominated trades industries—the administration can deliver on its promise for an equitable recovery while also repairing damaged roads, bridges, and pipes.

Women only accounted for about 10% of the construction workforce in 2020, according to the Bureau of Labor Statistics.

The problem: Industry groups and labor unions disagree on how to get there.

Unions say that using their registered apprenticeship pathway ensures that workers safely get a full slate of training, while they also get a representative to bargain for benefits like child care and transportation services.

“We really have to get serious about if we say we want to get to folks that have barriers, whether it’s historically marginalized communities, people of color, whether it’s women, or individuals that have been in contact with the justice system, we have to provide them support,” said Melissa Wells, head of diversity for the North America’s Building Trades Unions.

Offering assistance like child care, retirement access, pre-apprenticeships, and other programs, are essential to ensuring the infrastructure money creates new job opportunities for those who haven’t been able to access the trades, while also increasing equity, she added.

More than two-thirds of tradeswomen surveyed by the Institute for Women’s Policy Research said difficulties finding child care and lack of pregnancy accommodations were an important factor in leaving the industry.

The construction industry, though, argues that Biden moves to roll back a Trump administration industry-based training model, include requirements like project labor agreements on federal construction projects, and encourage training providers to partnerwith unions, will tilt funding in favor of labor organizations and exclude a large share of the trades workforce that isn’t unionized.

Only 12.6% of construction workers were union members in 2021, BLS data shows.

“There’s a large push by the administration and it’s very clear that they they want to grow the union workforce,” said Greg Sizemore, vice president of health, safety, environment, and workforce development at the Associated Builders and Contractors. “But here’s the deal: The vast majority of Americans today working in the construction industry say, ‘I choose to work in a merit shop environment that allows me to get paid based upon what I know or the value that I bring to the industry, as opposed to what somebody has negotiated for me in a contract.’” 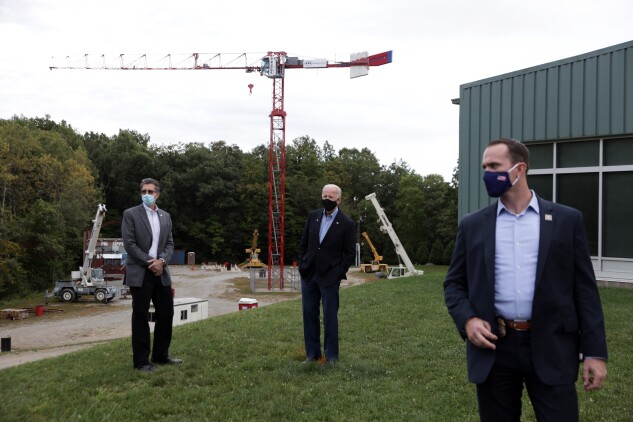 As part of its effort to ensure there’s enough skilled laborers to complete the upcoming infrastructure projects, the Department of Labor in June announced a summer-long “Talent Pipeline Challenge.” The initiative calls on employers and local governments to take advantage of over $800 million set aside for workforce development by working with organizations that offer job training, like unions, as well as seeking out women and workers of color, and to provide services like child care and transportation assistance.

At the same time, the DOL is also working to rescind the Industry-Recognized Apprenticeship Program or IRAP, finalized by the Trump administration in 2020. The program allowed companies to create their own training programs that could be monitored by third parties, which the Trump DOL said would expand apprenticeships in under-represented fields, such as health care and information technology, that haven’t been a part of the DOL’s traditional registered apprenticeship model.

“We were trying to move away from the idea that you had to be a registered apprentice in order to get into an apprenticeship program,” said John Pallasch, former head of the DOL’s training division during the Trump administration. “We just wanted to get more qualified people into the talent pipeline so that business and industry had the skilled labor that it needs.”

Instead, Biden says the administration will focus its job training efforts on bolstering DOL’s registered apprenticeship programs, a system that has been in place for eight decades and has tougher standards for participants.

While the construction industry was ultimately excluded from IRAPs, members of building trades unions and the Biden administration thought the industry-led programs would undercut the reputation of their registered apprenticeships, because workers could claim to be apprentices, but not have the full, complete safety and skills training or guaranteed wages provided by registered programs.

“The problem with IRAPs is no safety standards, no progressive wages. It was kind of very loose and very ill-defined,” said NABTU’s Director of Education and Research Tom Kriger. Industry-run programs typically only provide training for a specific skill, limiting a workers’ ability to find future jobs, he added.

ABC officials, however, say registered apprenticeships shouldn’t be the only pathway for job training. The registered system can be overly competitive, making it difficult for workers with other responsibilities to prepare for the testing required to qualify. And it can have too many requirements to attract businesses to participate, according to ABC’s Sizemore.

“Clearly, the government-registered apprenticeship system is not meeting the industry’s need for skilled labor and cannot be the only solution supported by government to meet industry demands and build a diverse workforce,” said Ben Brubeck, ABC’s vice president of regulatory, labor, and state affairs.

All Eyes on PLAs

The Biden administration has also made an effort to expand the use of project labor agreements on federal projects. Such pre-hire pacts guarantee a contractor will enter into collective bargaining agreements with at least one union covering the duration of the project.

A February executive order directed federal agencies to use such agreements on construction projects above $35 million. Unions and Democrats hold up PLAs as a way to negotiate well-paying jobs and secure benefits to support workers who are underrepresented in the trades, like women.

But industry groups and Republicans say that PLAs favor unions and make it difficult for smaller, local, and minority-owned businesses that don’t have strong ties to unions or are unable to meet the requirements outlined in the agreement.

“And by the time they do, the truth of the matter is, the project will be left with somebody else,” ABC’s Sizemore said. “Would a government-mandated PLA result in a decrease in hiring of minority and women owned businesses, veteran owned businesses? We’re saying absolutely, it would.”

To contact the reporter on this story: in Washington at rrainey@bloombergindustry.com