In this photo illustration, a teenager poses for a picture with a laptop in Arlington, Va., in June 2021.
Photographer: Olivier Douliery/AFP via Getty Images

Joseph Feldman considers himself a project management expert after years as an executive for companies such as and NutraSweet.

That expertise was put to the test when his insurance company, Blue Cross Blue Shield of Illinois, said it would stop paying for residential behavioral health care for his daughter, a teenager at the time. He faced paying tens of thousands of dollars to keep her in the residential program, or pulling her out early, possibly endangering her recovery.

He kept her in the program, fighting to get the claims covered through appeals to the insurer and a lawsuit. It required his “project management gene” and resources that aren’t common, Feldman said. “No one should have to go through what our family did.”

He sued to show the insurer wasn’t following laws that require health plans to cover behavioral care the same as traditional, physical health, he said. That push to improve mental health coverage is now getting help from the Biden administration. 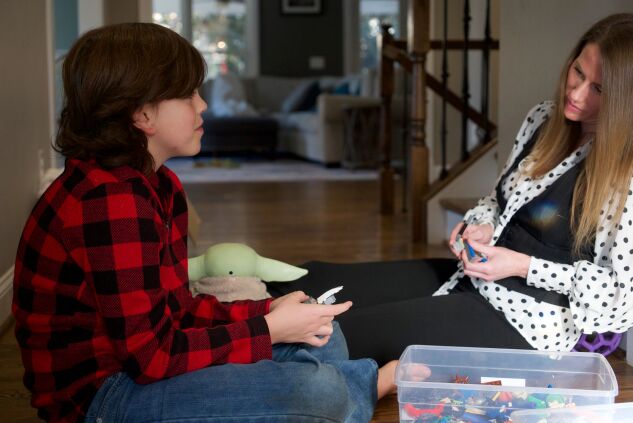 Daniel Mooney, a third-grader who attends classes virtually from his basement because his public school is closed due to the pandemic, plays with his mother at their home in Falls Church, Va., in February 2021. A growing number of children and adults in the U.S. are struggling with their mental health during the coronavirus pandemic.
Photographer: Bastien Inzaurralde/AFP via Getty Images

President Joe Biden recently signaled he wants to strengthen enforcement of mental health parity rules. That effort will include a demand that insurers offer an adequate network of behavioral health providers, including three visits for a patient each year without cost-sharing, and ask Congress to help improve parity.

Mental health disorders show signs of worsening for many Americans, and the lack of adequate coverage exacerbates the problem, care advocates say. Almost 40% of U.S. adults reported symptoms of anxiety or depression in 2021, nearly quadruple the level in 2019, the Kaiser Family Foundation reported in 2021.

“Lawsuits won’t solve this problem,” said Feldman, who sits on the board of the Kennedy Forum Illinois, which advocates for bolstering health parity.

Colleen Miller, a spokeswoman for Blue Cross Blue Shield of Illinois, declined to comment on the lawsuit, but said the company is “committed to providing our members with access to high quality medical and behavioral health care.”

Biden may get help in the Senate Finance Committee, where members of both parties are seeking ways to bolster mental health coverage, likely through changes to Medicare and Medicaid policies. The panel aims to unveil legislation by this summer, two aides familiar with the discussions said.

Some mental health provider groups are calling on Congress to levy fines against insurers that fall short.

“We need to make sure there is some penalty for not doing it right,” said Saul Levin, chief executive officer and medical director for the American Psychiatric Association.

Insurers are required to cover mental health services to the same extent they cover other services under the 2008 “Mental Health Parity and Addiction Equity Act” (Public Law 110–343).

However, Americans struggle to find affordable mental health and substance abuse treatment because many services are out of network.

Behavioral health providers were more than five times as likely as other providers to be outside their patient’s insurance network, and were paid by insurance companies about half as much as their peers for comparable services, a 2019 Milliman study found.

This can inhibit access to mental health resources because people fear high bills, said Benjamin Miller, president of Well Being Trust, a philanthropic organization that advocates for increasing access to care.

“One big reason people avoid care is they’re afraid of the cost of care,” he said. “When they know they’ve got to pay out-of-pocket for it, it’s a real barrier.”

All 30 health insurance plans and issuers reviewed in 2021 were out of compliance with the law’s rules on parity, three federal agencies reported to Congress. Some examples of non-compliance were limiting access to services to treat those on the autism spectrum, and excluding coverage of medication-assisted treatment for opioid disorder.

The report calls for the Department of Labor to be empowered to fine insurers that don’t comply with parity laws.

“In the absence of the authority to impose civil monetary penalties, DOL is limited in its ability to ensure appropriate corrective action in response to findings of non-compliance,” the report said.

Insurers have said they too want parity, but have long opposed letting the government levy fines for those out of compliance.

“We strongly support parity in coverage for physical and behavioral health needs, expanded access to telehealth services, and driving value-based care arrangements that include behavioral health providers and services,” Matt Eyles, president and CEO of AHIP, the health-insurance trade group, said in a statement.

Given the report on noncompliance, insurers have also called for more guidance from the Department of Labor on how to comply with the 2008 law on mental health parity.

Complicating the problem is the reluctance of many mental health providers to join insurer networks because it means accepting less money.

“For our members taking private health insurance is part of their charity care,” said Chuck Ingoglia, president and CEO of the National Council for Mental Wellbeing, which represents mental health and substance use treatment organizations. Charity care is discounted or no-cost care from providers. “That’s how much they lose when they take private insurance.”

Lawmakers have yet to coalesce around a solution to improve parity or bolster the Biden administration’s effort, but are eager to pass legislation this year, perhaps in the Senate before Congress recesses for August.

In a potential sign of bipartisan support, Wyden’s committee has tapped Sens. (D-Colo.) and (R-N.C.) to come up with a solution.

A Senate aide familiar with the debate said the pair focused on policy solutions within the Finance Committee’s jurisdiction, namely Medicare and Medicaid. That means senators could increase what Medicare or some Medicaid plans pay for mental health services, or broaden coverage for some public health insurance plans, the aide said.

Bolstering Medicare plans could have a ripple effect that encourages private plans to follow suit, the aide said.

(D-Pa.), a member of the Finance Committee, pointed out that Medicaid, which covers a large portion of American children, pays “significantly lower” than many private plans, or what providers charge outside insurance. That means teenagers can be limited in access to mental care, he said at a February hearing on mental health.

Levin’s group, the American Psychiatric Association, has fought for legislation to give states new resources to step up their enforcement of parity rules, as well as to give the federal government the power to punish plans out of compliance.